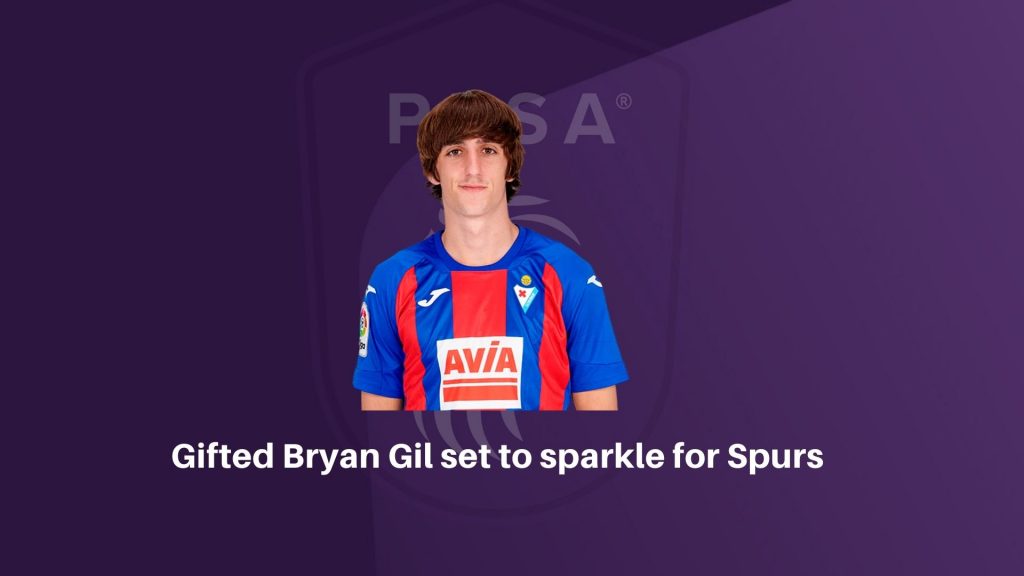 Hugely talented and set to excite the Tottenham Hotspur fans for years to come, the arrival of Bryan Gil is one littered with upside.

Having impressed immensely during La Liga loans with Leganes and especially at Eibar last term, the Sevilla owned starlet was a man in demand this summer. Spurs won the race for his signature, though, eventually agreeing a deal with Sevilla that saw them pay £21.4 million and Erik Lamela for Gil.

“I’m very proud to join Spurs. To represent the badge of a world-class club like Tottenham and be able to play in the Premier League feels great,” he told Tottenham’s official website.

“I’m coming to Spurs to win points and give everything in every minute. As a player, on top of hard work and sacrifice, I want to contribute dribbling, goals and assists. The Premier League is the world’s elite. The pace is non-stop, which is really attractive for players and fans. I can’t wait for the season to start!”

Although he’ll have to wait before joining up with his new teammates and making his debut due to him being at the Olympics with Spain, watching him play should be worth the wait for Spurs supporters.

An absolute joy to watch with the ball at his feet, the 20-year-old is a fearless and confident dribbler capable of unbalancing defences at will. Blessed with Velcro-like control and an elite first touch, this gives him the base to be such a weapon.

Relishing every opportunity to take on his opponents, his wizardry on the ball means he’s a nightmare for defenders to contain. So good at outfoxing markers with his repertoire of moves that includes crafty feints, shimmies, shoulder drops, alterations in pace and direction, stepovers and faked shots and passes, he’s a tough man to contain.

His languid, flowing style adds to his elusiveness, which consequently places defenders in dilemmas whether to challenge and risk getting beaten or hold back and give him time and space to run at them.

Adept at drawing multiple markers to either draw fouls or open passing lanes so a free man can be accessed, this is another valuable string to his bow. The fact he’s press resistant and can maneuver himself out of danger in close quarters using his fast footwork and body position to protect the ball, are further highlights.

Progressive and creative in his passing too, the Spaniard is adept at generating chances from both set pieces and open play. Proving his crossing class especially at Eibar, his ability to hit driven, chipped, lofted or curling deliveries into the box were highlights. Assessing his options quickly and executing under pressure soundly, this ensured he could pinpoint targets with a range of cutbacks and crosses. 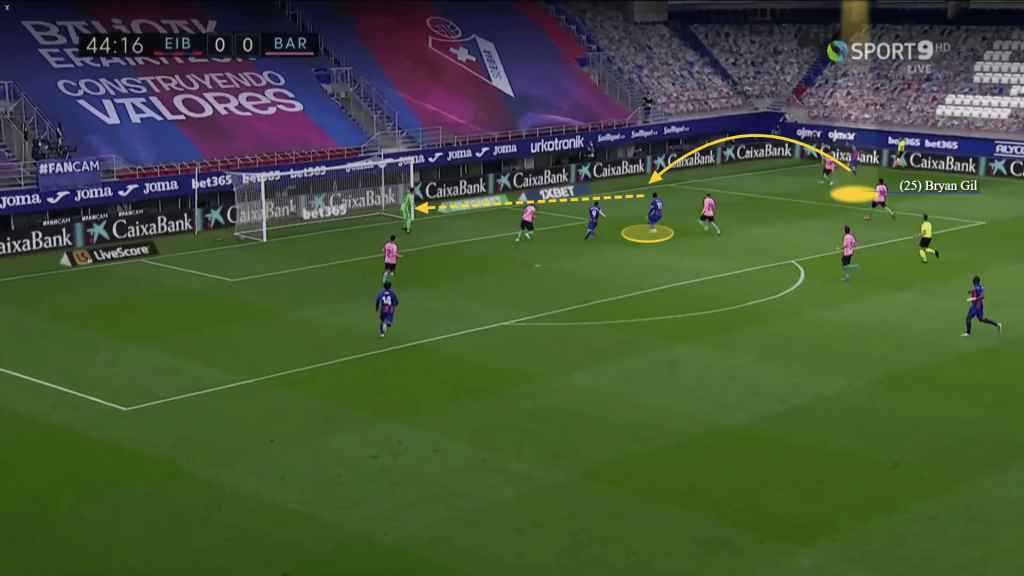 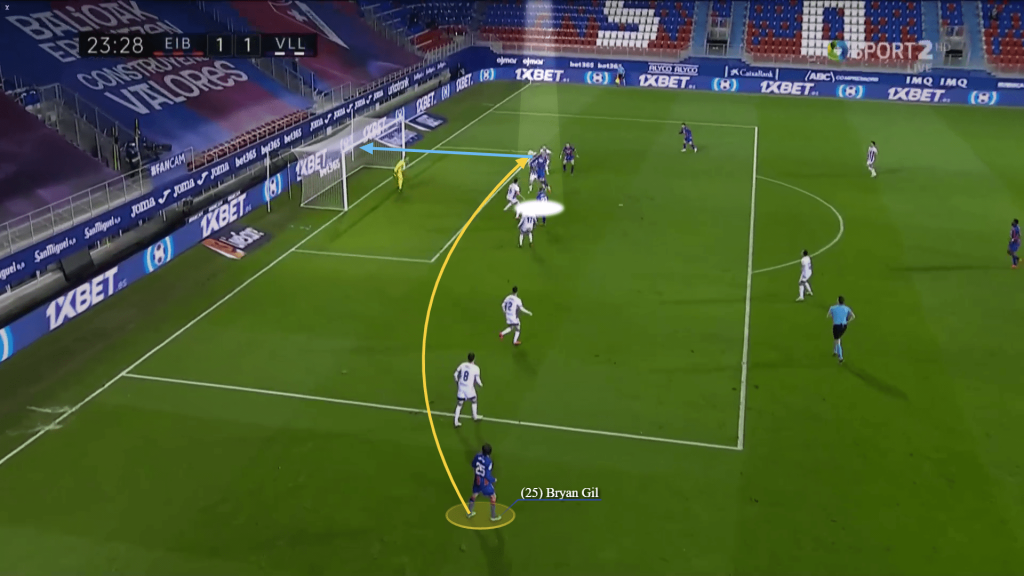 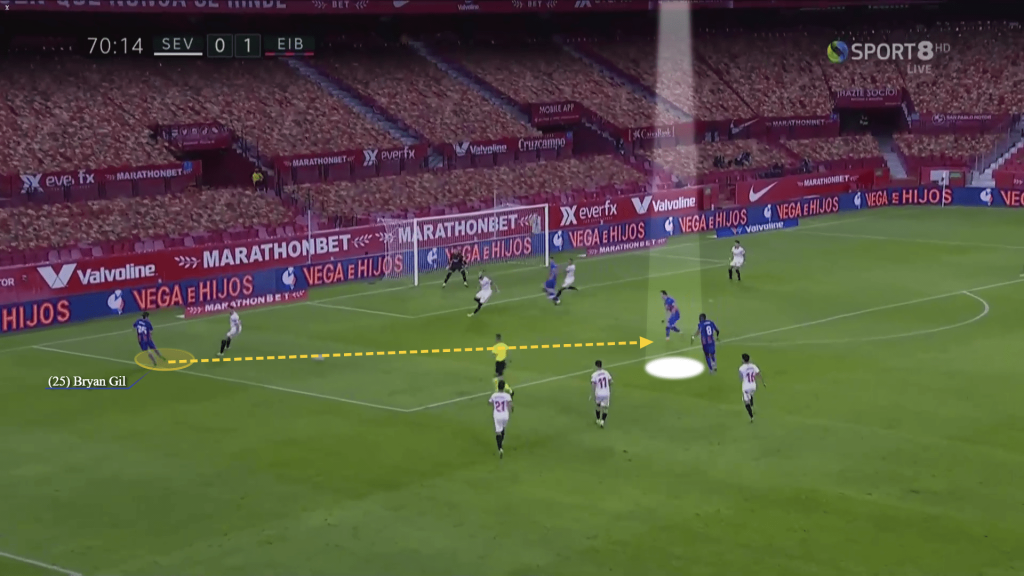 Very sharp at spotting teammates, this also sees him oblige their runs down the channels and in behind with some crisp through balls. In addition, his aptitude in this area enables him to combine sharply in slick passing exchanges using his tidy one and two touch game and neat flicks and backheels. 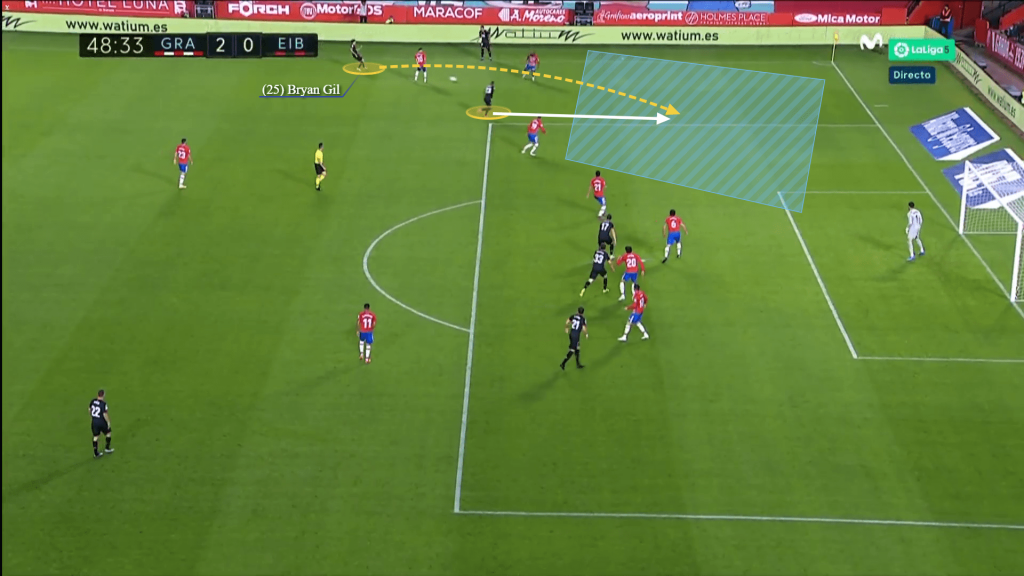 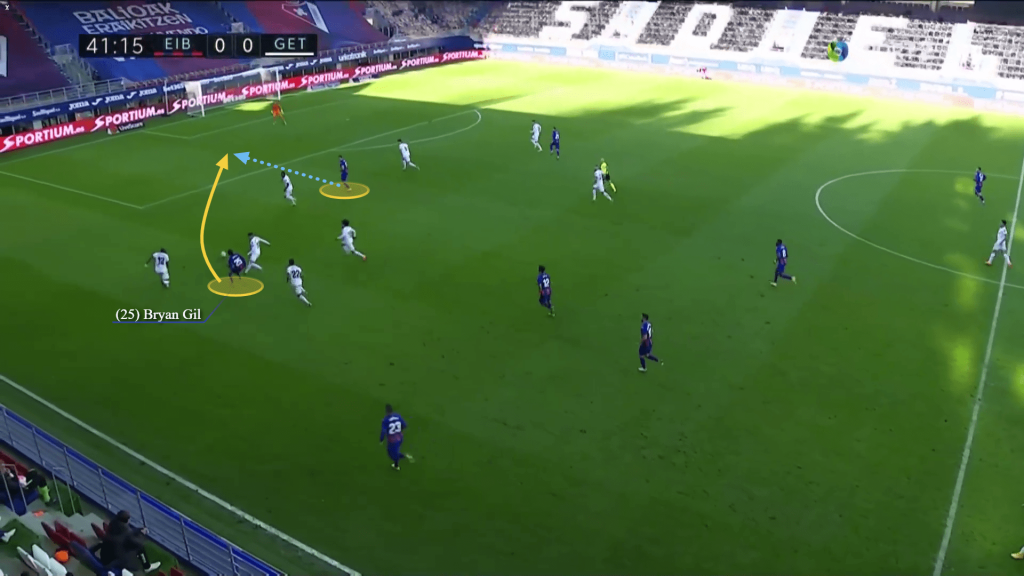 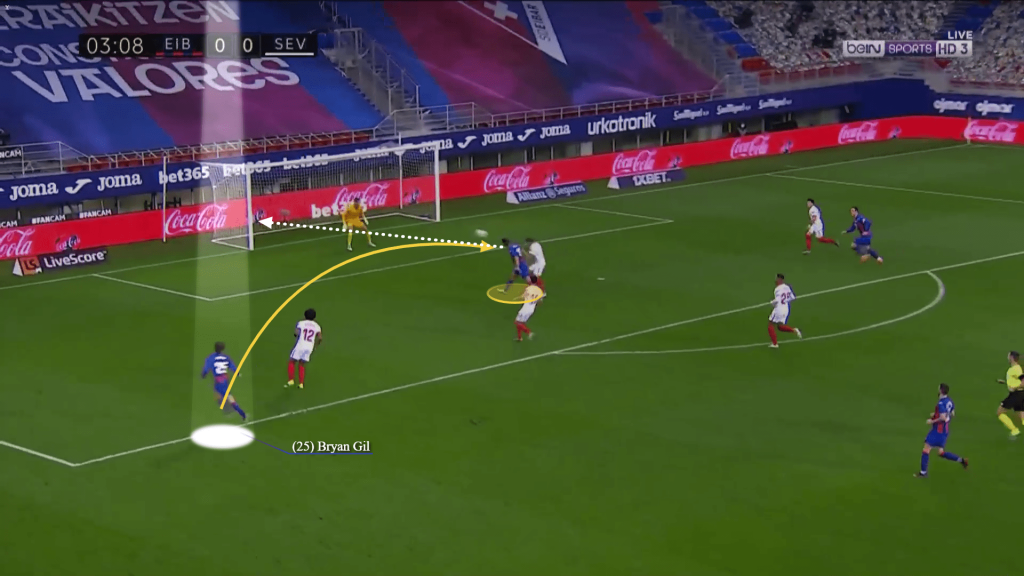 Competent at breaking the lines with his distribution and ball carrying, Gil’s eye for goal has added to his menace, with his handy finishing allowing him to bag four La Liga goals last term in a struggling Eibar team. 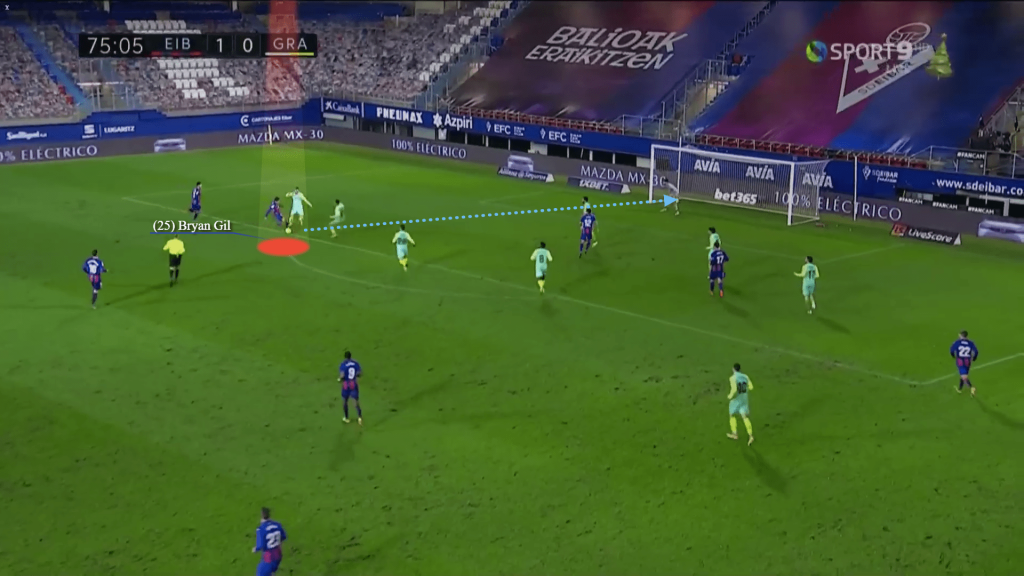 Possessing a fine appreciation of space, he cunningly identifies gaps to exploit with his movement and positioning. This is evident when he edges infield into the half spaces between the lines, where he can receive and open up the field for himself to dribble or pick out a pass. Extra bonuses associated with receiving in such areas is that it places defenders in two minds on who should track him, plus how it makes room for his fullback to bomb on round the outside.

If the moment is right, Gil’s shown he can burst in behind to stretch defences and embark on dangerous blindside runs into the box to add an element of surprise for his adversaries to contain, which has the byproduct of generating space for teammates. 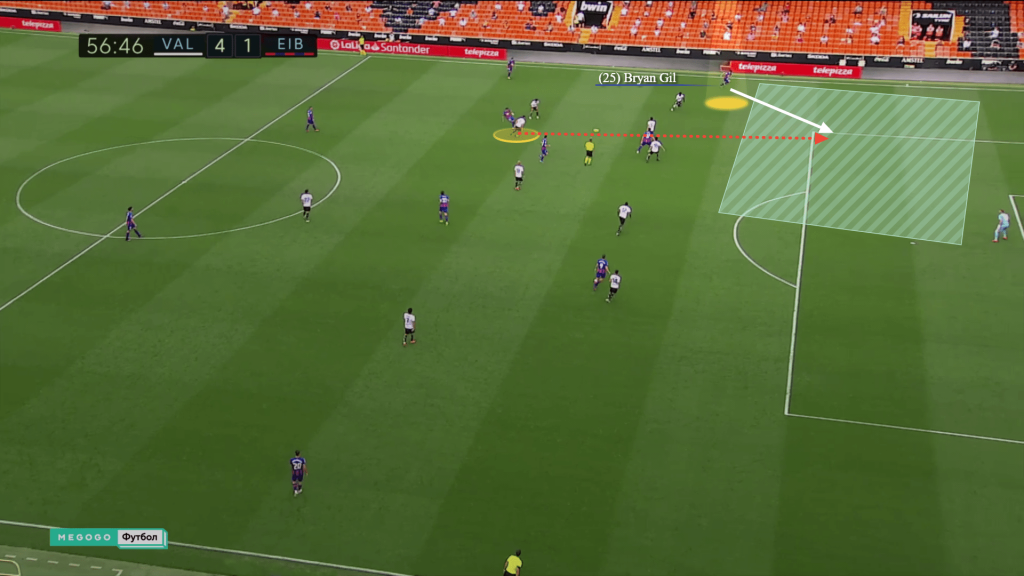 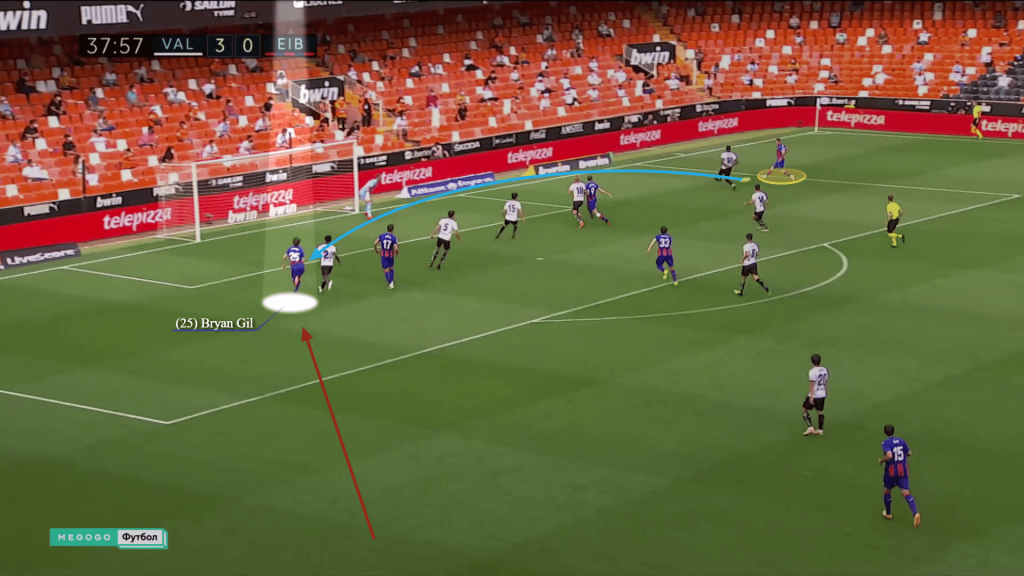 Mostly, though, he can be found hugging the touchline so he can be isolated against his direct opponent and use his brilliance on the ball to conjure some threatening situations.

The graphic below comparing his numbers to Real Madrid’s elite young winger in Vinicius Junior demonstrates how well he stacks up in a range of categories. 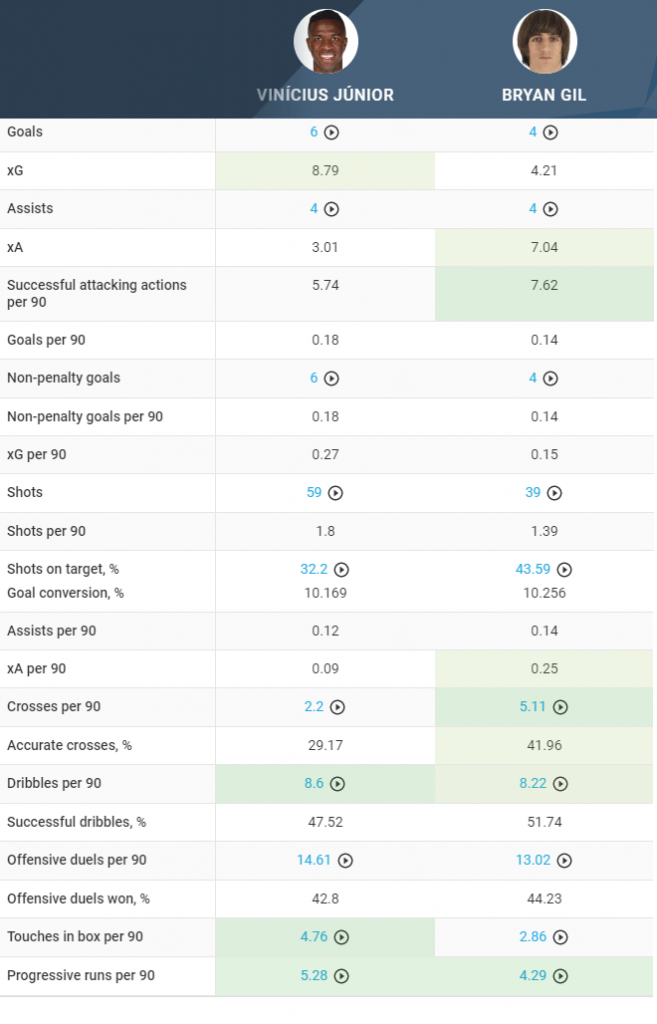 Having just won a silver medal with Spain at the Olympics, it’ll probably be a couple of weeks before he makes his debut while he’s eased into the fray and adjusts to life at his new home.

Once his period of integration and adaptation is complete, however, Spurs fans should be in for a real treat watching the uniquely skilled Gil strut his stuff under the bright lights of the Premier League, for he truly is a special player destined for a tremendous future.