From the classroom to the Premier League | PFSA SCOUTING NETWORK 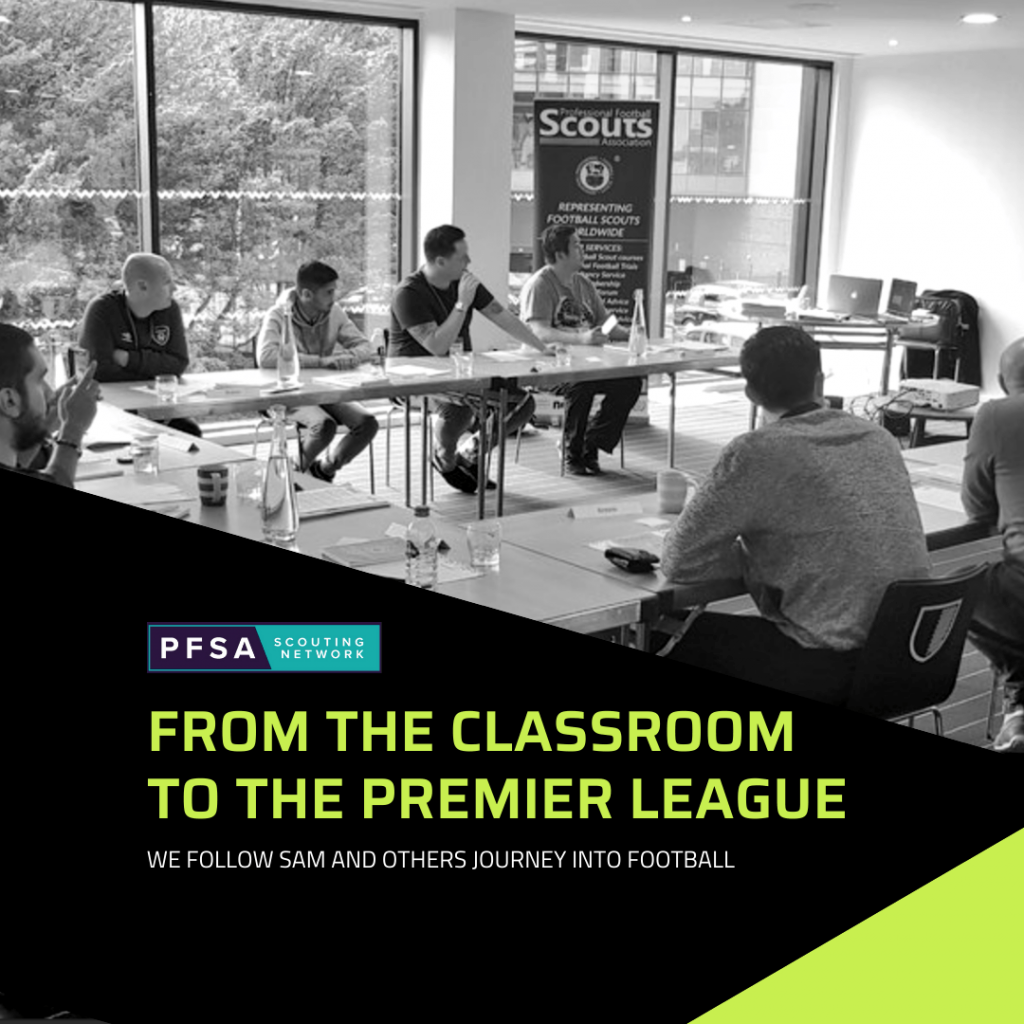 BACK in the summer of 2020 Sam Brice had no idea what being a football scout entailed but within six months he was at one of the biggest games of the Premier League season producing detailed opposition analysis.

Like every other person in the world Sam’s life had been turned upside down by Covid-19.

He had been in the US since 2016 on a football scholarship studying Sports Management and had just landed an internship working for the USL – the second tier league in the US below the MLS.

But that all ended when the Pandemic struck and he returned home to Lancing in West Sussex keen to make a positive out of a bad situation.

That was when Sam discovered the PFSA and their online courses in Talent ID and Opposition Analysis.

A few clicks later he was set on a path that would take him to the London Stadium and Stamford Bridge to file reports on West Ham and Chelsea.

He said: “When I came home I wanted to take the opportunity to do something new and productive and that is when I came across the PFSA.

“I have always loved football. I have played since I was five and it has always been part of my life and something I wanted to be involved in.

“I had no previous experience in scouting or the analysis side of football. So I had no idea what to expect going into the courses.”

In July and August, Sam completed the PFSA’s online Level Two Talent ID  the Level Two Opposition Analysis and the Level Three Advanced Reporting  where tutors included the likes of Steve Jones, who has been Neil Harris’ main opposition scout at Millwall and Cardiff.

He added: “Before the courses I don’t think I appreciated the depth that scouts and analysts go into and the amount of work that goes on behind the scenes.

“For example, on the Talent ID side of things I used to think that scouting was all about technical ability and physical attributes. 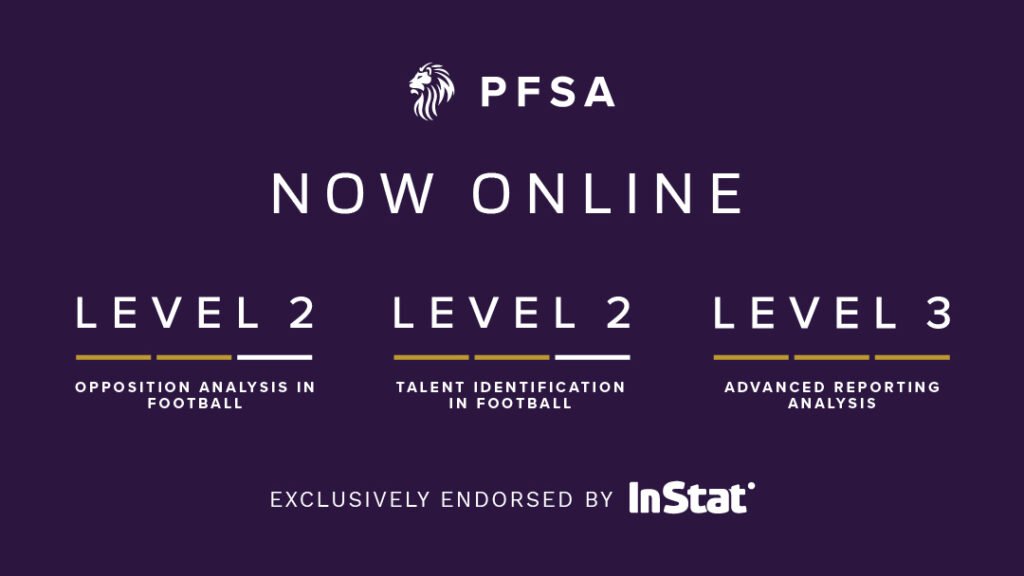 “The courses taught me that the psychological and sociological aspects are just as important, such as how players interact with others on and off the field. Things went into a lot more detail than I appreciated from simply a playing perspective.

”‘All the tutors and industry experts have a vast wealth of knowledge and experience.

“They were all so helpful, not just during the courses but also after completion.

“Steve Jones has been a great help and is always willing to answer any questions I put to him, which I appreciate greatly and its helped me to develop my reports further.”

Another big thing Sam realised while doing he courses which allowed him to interact and network with football practitioners from lots of different levels and backgrounds, was this was something he wanted to do for real and not just in the classroom.

Thanks to the PFSA’s scouting network this is exactly what he was able to do within weeks of completing his courses.

Sam explained: “I can’t remember thinking about doing any scouting when I initially booked to do the courses but once I had done them, I realised this is something I really want to do and want to pursue.

“So at that point it was quite clear that I wanted to take advantage of the opportunities the PFSA provides after the courses and get to some of the games they have on the scouting network.

“That is the brilliant thing that they do. They don’t just teach you and give you the educational foundation.

“There is a pathway that the PFSA has which you can hopefully progress from. They provide the opportunity to put what you have learned into practise.”

That first opportunity for Sam was Crawley v Tranmere for Morecambe. The tutors on the PFSA course had taught him how to prepare for scouting but there is nothing quite like being in the field and gaining experience on the job.

Sam recalled: “Beforehand I tried to be as prepared as I could. I had my notepad, I had broken that down to sections of the game and areas I wanted to report on.

“That helped when it came to writing the report during the game. I wrote several pages of notes. That was on the individual players, the strengths and weaknesses of the teams, shape in and out of possession and in the transitions, then the set-pieces, corners and free-kicks.

“It was a real eye-opening experience. It gave me an idea of what it is actually like to be a scout, reporting on a live game. 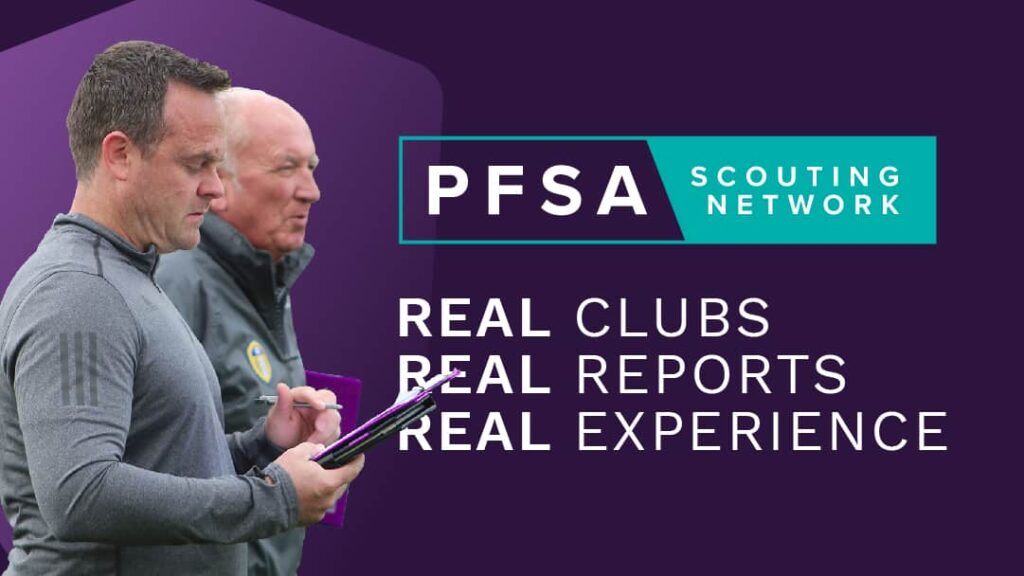 “It was important to go into as much detail as possible with my notes because when it comes to writing the report it is vital that the information you provide is as accurate as it can be.

“For me the hardest part to note was the set-pieces and particularly corners.

“Normally the attacking team has five players in the box so you have to note their positioning before the kick and then where they all make their runs to and you have to recall that for five different players all in the space of a few seconds.

“That was the biggest challenge doing it live.”

Luckily for Sam, the PFSA’s tie up with InStat meant he had access to game footage so he could pause and rewind to make notes on individual player runs and blocks. In fact he did it so well that Morecambe asked him to do some video analysis of opponents for them before sending him to Stamford Bridge. 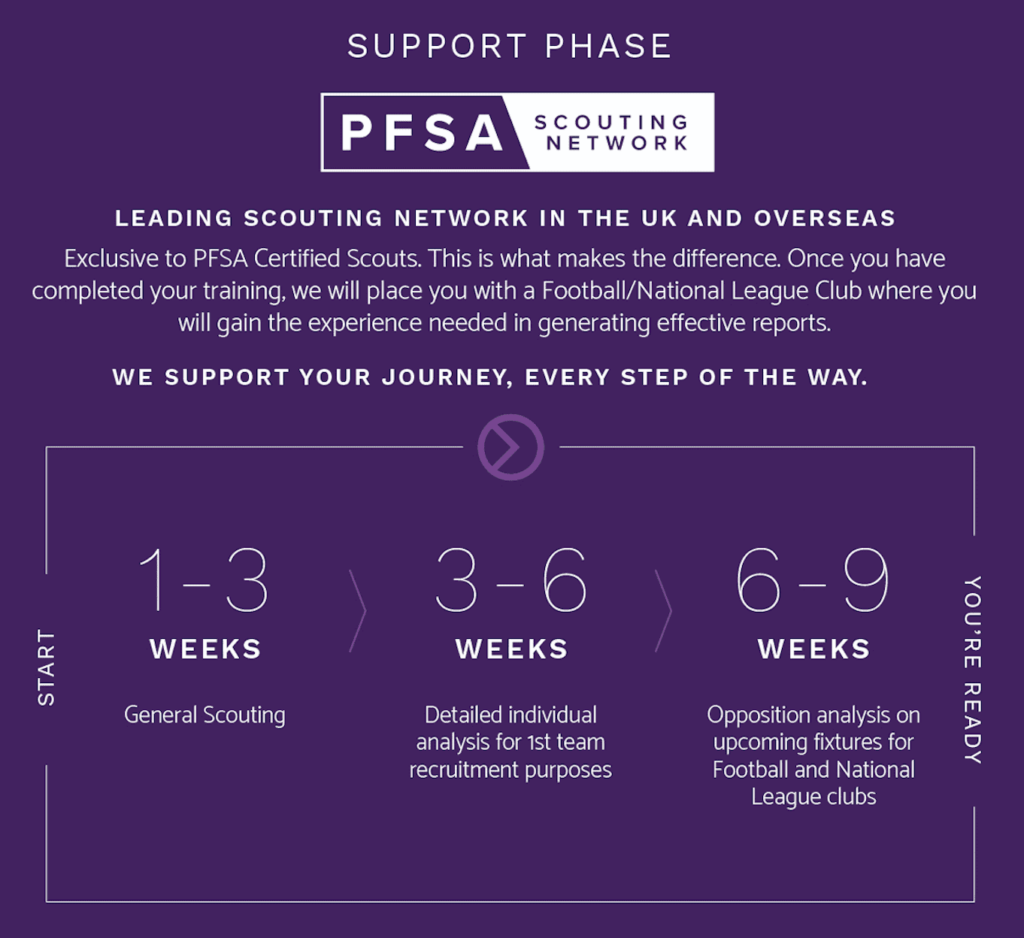 But his first experience of scouting a Premier League match was West Ham v Crystal Palace, on behalf of the Hammers FA Cup third round opponents Stockport.

Then a few weeks later he was sat above the dugout for Chelsea v Manchester City.

Sam took his chance to network with experienced Premier League scouts at both games.

He fully embraced the privileged position of being one of just a handful of people allowed in the stadium so he could hear every word Frank Lampard and Pep Guardiola were saying on touchline.

In terms of scouting, it provided him with a new challenge.

Sam said: When I am reporting on the lower leagues, admittedly I know less about the players, which for me makes it a bit easier when judging them on a game-to-game basis.

“However, when I was then reporting on these big name players in the Premier League games there is the added challenge of trying not to be subjective and allowing prior knowledge of the players sway what you report on them.

“Whilst it’s important to do as much research as you can, you also want the report to remain objective and sticking to the facts of the game that you are reporting on.

While Sam’s reports did not play a part in causing a major upset in the FA Cup this time, it has been an opportunity he was not expecting to have and continues to experience due to the quality of the work he is providing for clubs.