Explosive and intelligent Daka a fantastic signing by Leicester 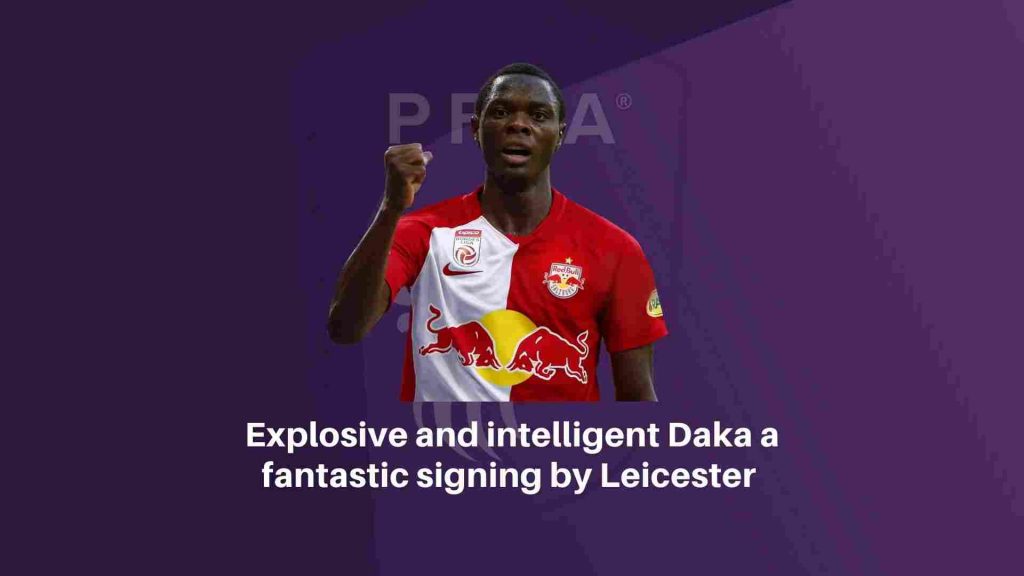 Proving what an accomplished striker he is during his time with Red Bull Salzburg, it was only a matter of time before Zambian star Patson Daka sealed a big move.

With a host of high profile outfits linked with acquiring his services including Liverpool, Arsenal, Manchester United, Chelsea and RB Leipzig, Daka wisely chose to join Leicester. Knowing he’d be an integral figure for the Foxes and be able to hone his craft under the guidance of tactically astute manager Brendan Rodgers, Daka insightfully stated his reasons for joining. “I believe it’s the right decision I have made,” he explained.

“From the moment I have been with the group, it feels like I’ve been here a long time. All the people are great. I really like it. It’s an exciting challenge for me and I look forward to the season and especially the games we are having in pre-season.

“It’s a special club, and there were some other options that I had, but I made the decision and all the focus I had was on Leicester City because I knew this was the right place for me.”

Having showcased his talent in the Austrian Bundesliga, where he scored 68 goals over his 125 appearances, plus won the league’s player of the season and scoring title last season, he underlined his striking qualities and that he’s a player on a distinct upward trajectory.

Still just 22, the explosive and exciting forward is a wicked addition to the Foxes frontline. And one who should be able to transfer his skill set to the Premier League successfully given an initial period of adaptation.

An adept finisher who takes up excellent positions inside the box due to his reading of the ball’s flight, speed and trajectory, this serves him with a strong foundation to find the back of the net. Instinctive, reacting rapidly to crosses, cutbacks or rebounds to alter his body and remaining concentrated, Daka often puts himself in the right place at the right time. 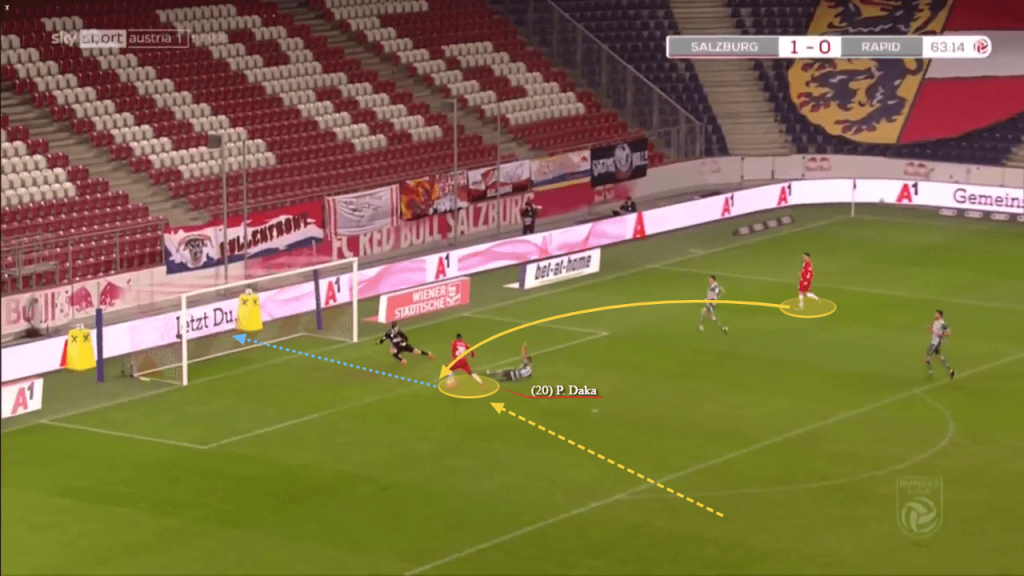 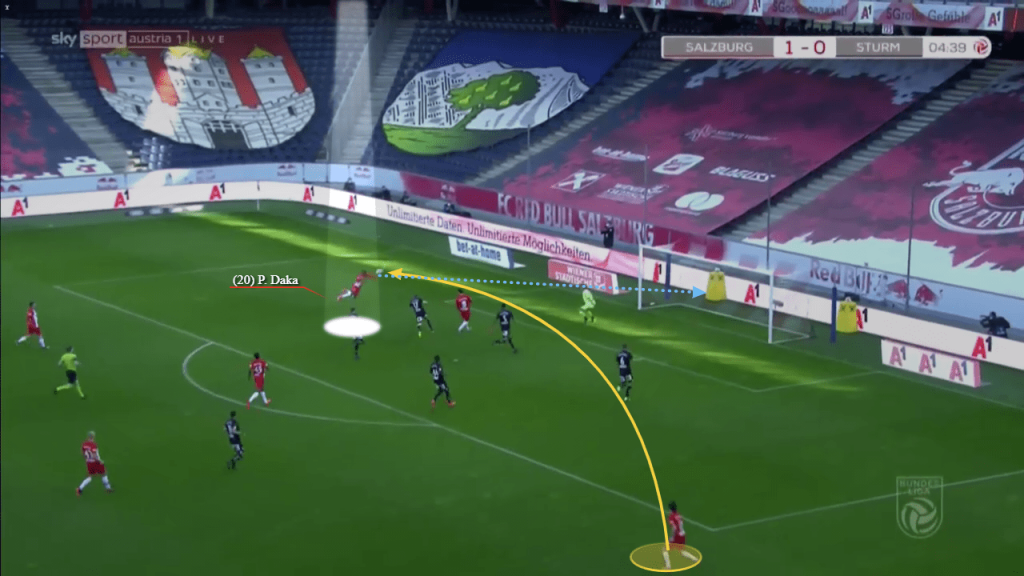 Two footed and composed when in 1v1s with the keeper or under pressure, this maximises his chances of converting chances into goals. Whether placing finishes, powering efforts on net, applying tap ins or nifty dinks, it’s impressive how Daka usually takes high percentage shots. Indeed, the fact his shot accuracy was 53.10%, in alliance with how his goals per 90 (1.19) outweighed his Expected Goals reading (0.96) illustrates what a weapon he is in front of goal. 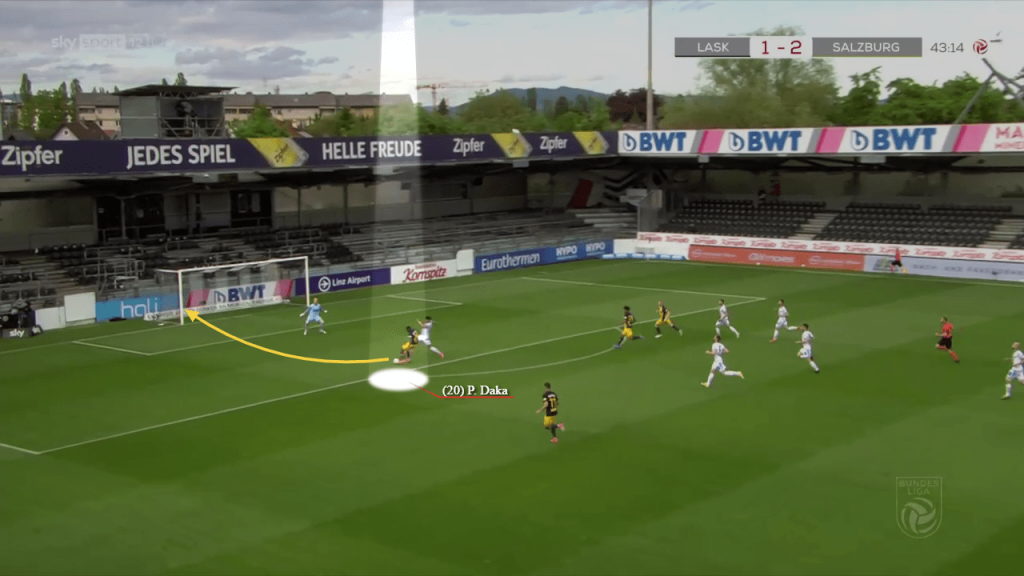 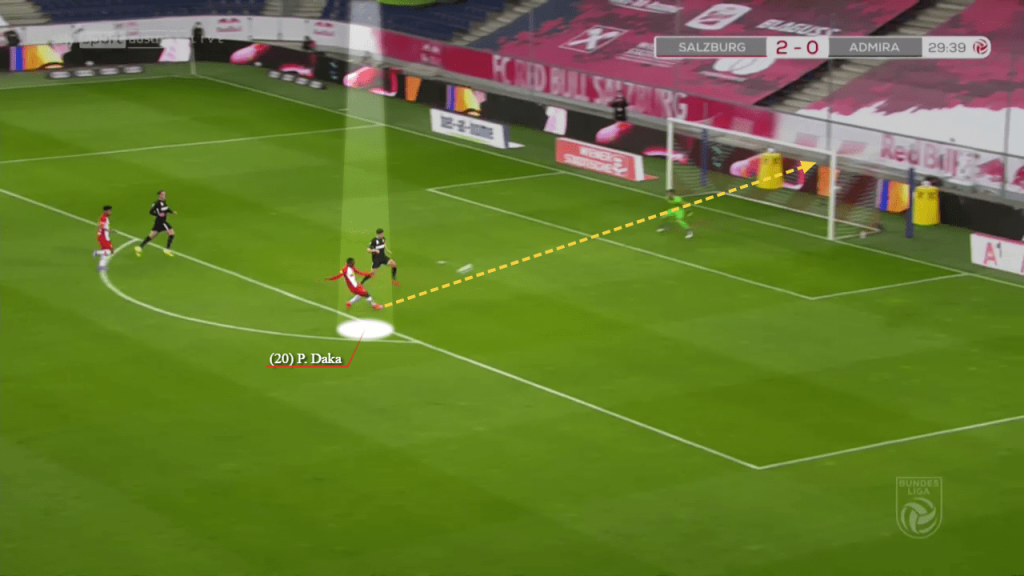 The Zambian international’s movement enhances his menace, for his pace, astute timing of his runs and clever variations make him a nightmare to keep quiet throughout 90 minutes. A master at gaining separation from markers by peeling off their back shoulder to exploit the blindside, using zig zags and double movements, plus by using his arms to push off them and his pace to attack gaps in backlines, this is a key element of his work.

By cleverly curving and angling his depth runs, Daka’s able to still keep his speed and dynamic advantage over his more stationary markers while remaining onside. Quick to identify when a teammate is in a position to spot him, he gets on his bike effectively to be a viable outlet. 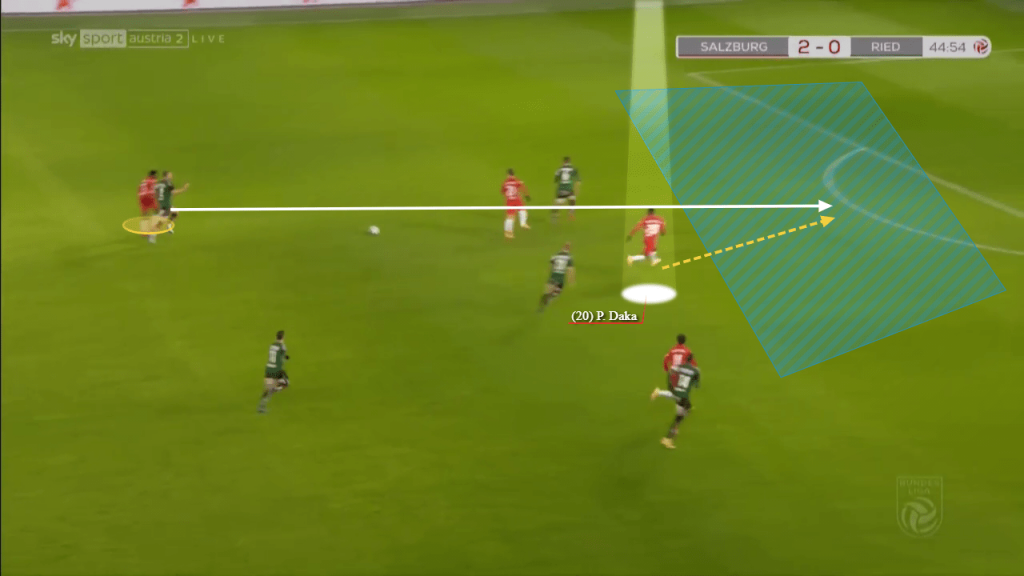 Varying the starting points of his runs, dropping deep to connect play on occasion and capable of executing sharp rotations with colleagues, he’s a forward that keeps defenders on their toes, which importantly creates space for others too. 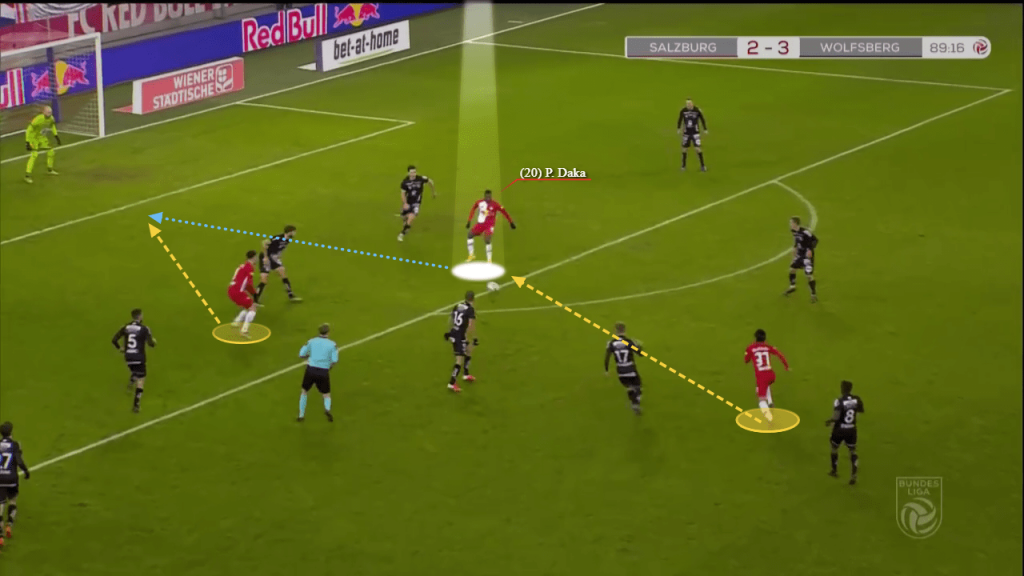 A danger once in possession as well, his dribbling to either evade pressure or beat his opponent when in full flight accentuates his threat. Sound with his first touch and ball control, this, in combination with his strength, helps him to both hold up play, immediately turn opponents to unleash shots, buy time to go against the grain of the pressure or win fouls.

Coherent in his passing, not only can he link play smartly in close quarters, spread the play and recycle possession, but he can also oblige runners with some accurate through balls, crosses and cutbacks. Indeed, his 27 assists during his time in Salzburg depicts his eye for a pass, creativity and execution. 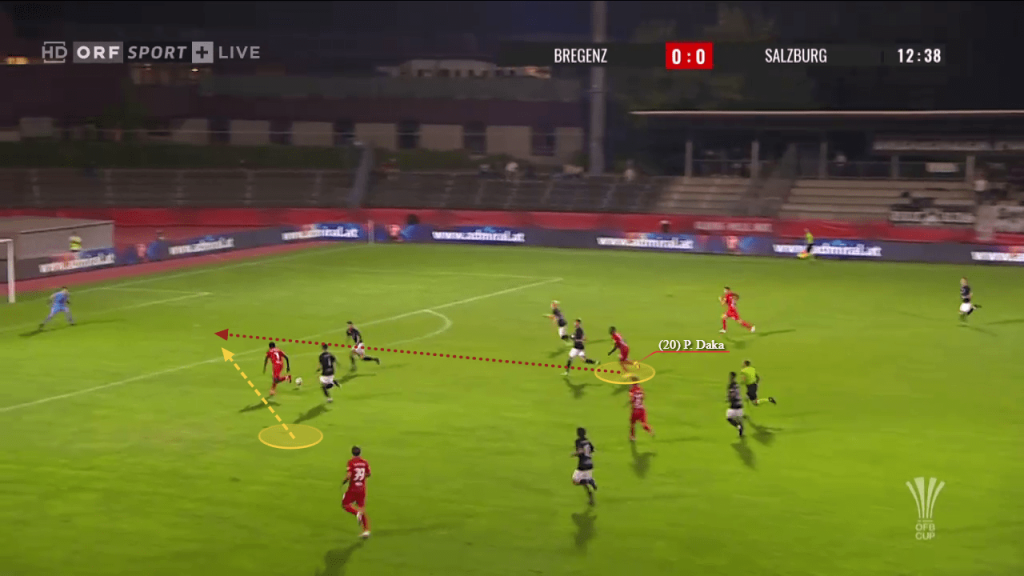 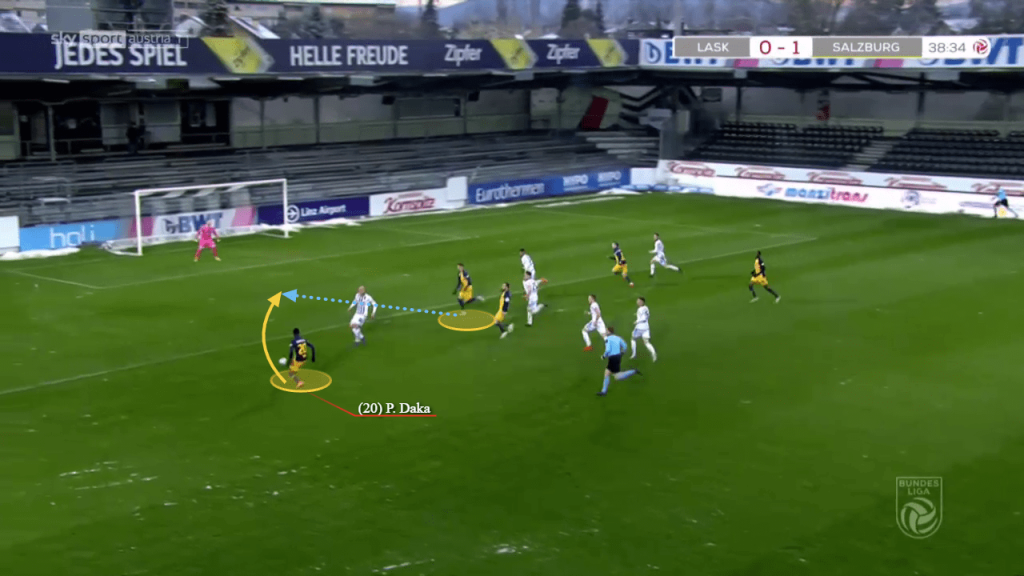 A direct, intelligent runner with and without possession, plus a clinical finisher to boot, the hard to mark Daka should add another dimension to the Foxes’ offensive forays. “He is a modern centre-forward, quick, capable of working hard and making the difference because he is skilful and has good movement,” explained former Zambian coach Herve Renard. 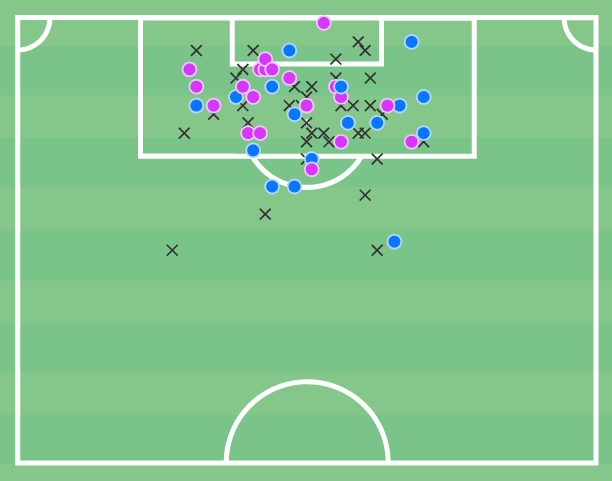 With his best years ahead of him, the signing of Daka is a real coup for Leicester, who fought off a host of huge clubs to secure his signature for a reasonable £23 million transfer fee.

Eager to hit the ground running and prove himself in the highly demanding Premier League, the ultra motivated, determined and talented Daka looks set to take the top flight  by storm sooner rather than later.