Exciting Osayi-Samuel making waves in the Championship with QPR

With Queens Park Rangers’ director of football, Les Ferdinand, recently stating the club may be forced to sell some of its prized assets in the summer transfer window to raise funds to help get them back on track financially, the first names that spring to mind are Eberechi Eze and Bright Osayi-Samuel.

Both hugely talented youngsters and both with contracts expiring in 2021, it’s understandable why the club might want to cash in on the two starlets. While the exciting Eze has grabbed a large chunk of the headlines, Osayi-Samuel hasn’t been too far behind, with him producing some fantastic football this campaign.

The scorer of six goals and supplier of eight assists for Mark Warburton’s men, the 22-year-old’s caught the eye of the likes of Southampton and promotion hunting West Bromwich Albion, as he looks destined to be a Premier League player next term.

But all that talk will have to wait for now, however, for the youngster will want to remain focused on keeping up his good form and continually improving under Warburton. “He [Warburton] brings togetherness because there is a diversity of young players and older lads,” he stated.

“He brings us all together and we’ve seen in games where things aren’t going our way for the young lads, you can see the older ones pushing us, even if it’s criticism, you have to take it.”

An absolute nightmare for defenders to combat due to how he can trouble them in so many ways with his mix of physicality, athleticism and technique, Osayi-Samuel’s a force to be reckoned with.

A lively, powerful and energetic dribbler, he’s a hard man to read as a result of his searing pace and array of manoeuvres to unbalance adversaries. Whether it be stepovers, slick changes of pace and direction, feints, shimmies and spins, there’s been many occasions where he’s ousted his man in 1v1 battles.

Upon factoring in his strength and how he uses his body to fend off opponents to withstand incoming pressure, and this amplifies his menace. Technically sound and an imposing presence, the way he’s held up the ball has been positive too. Doing a fine job of protecting the ball when he receives so he gets his body between the ball and his tracker, this helps win fouls or maintain possession while he waits for a viable option.

It’s also good to see how he links play neatly with the ball at his feet, with him playing some neat one-twos, flick-ons and one-touch passes. Accompanying this with some quality crosses and cutbacks, plus incisive through balls and switches, and his handy distribution has added to his worth. 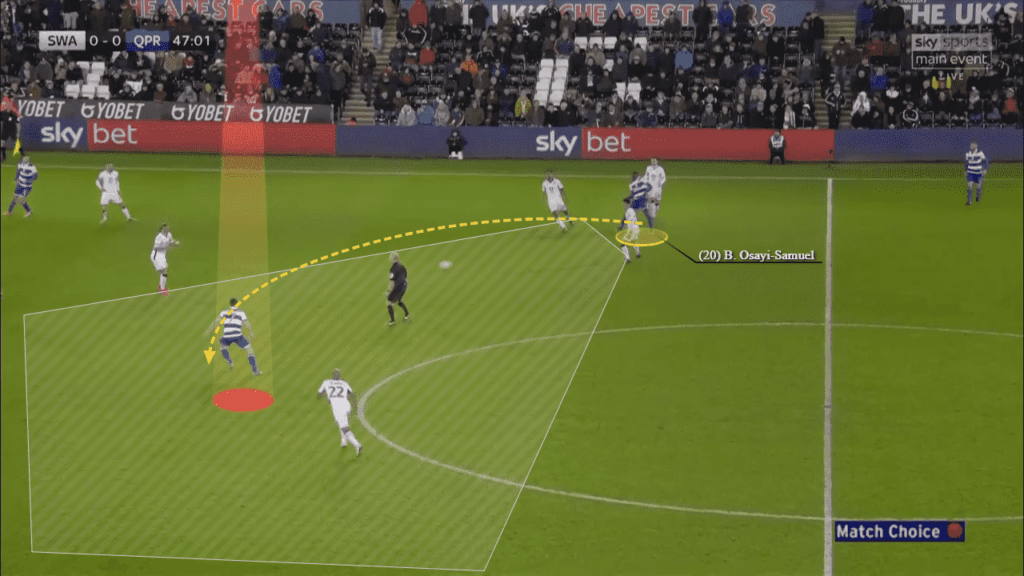 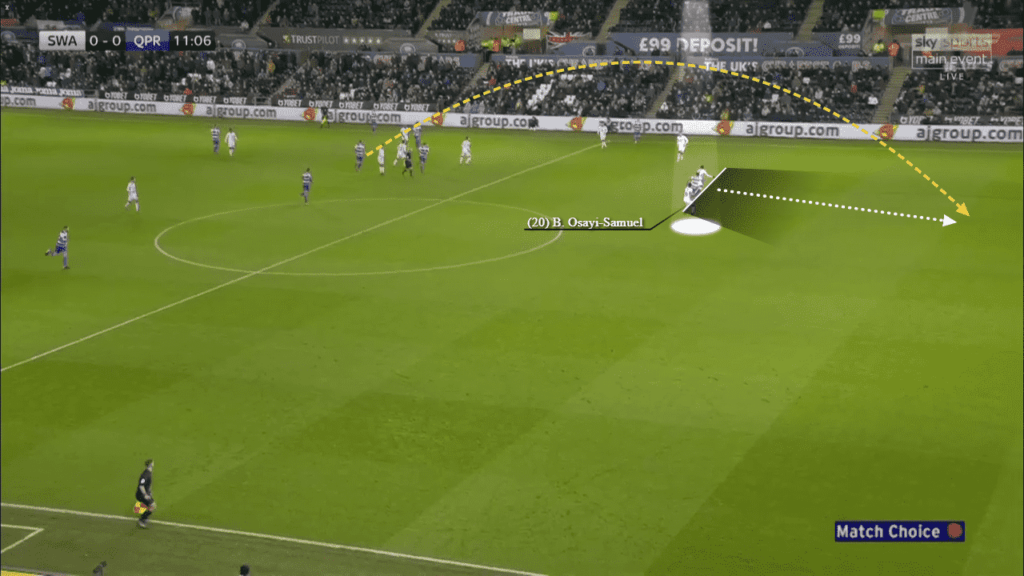 His off the ball movement is another important element towards his success. Especially damaging when running in behind or surging forward on the counter, there’s not many defenders that can stop the speedster when he gets going. In addition, how he times and angles his runs has been key, thus enabling him to exploit the blindside and spaces between defenders to gain an edge. 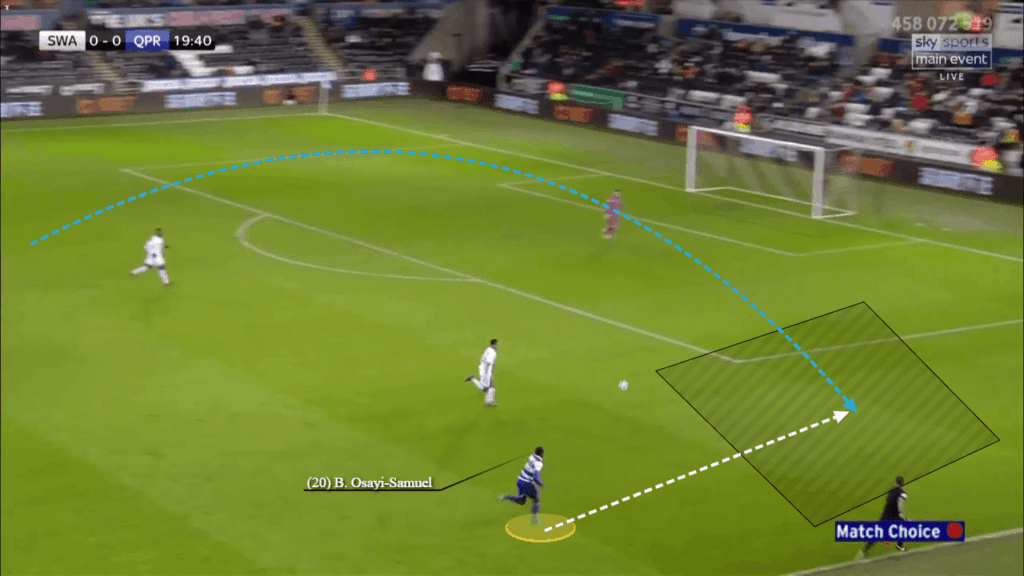 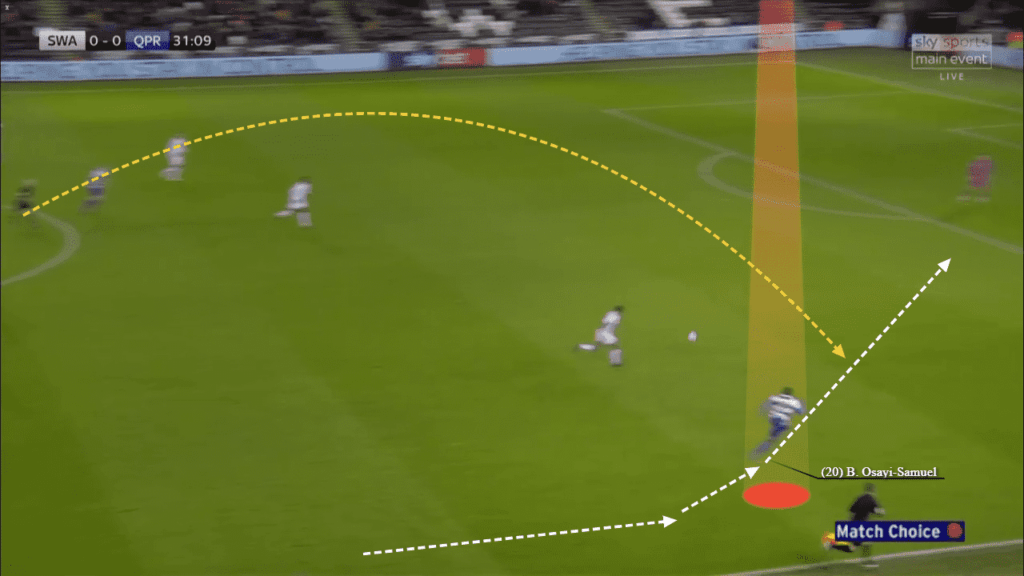 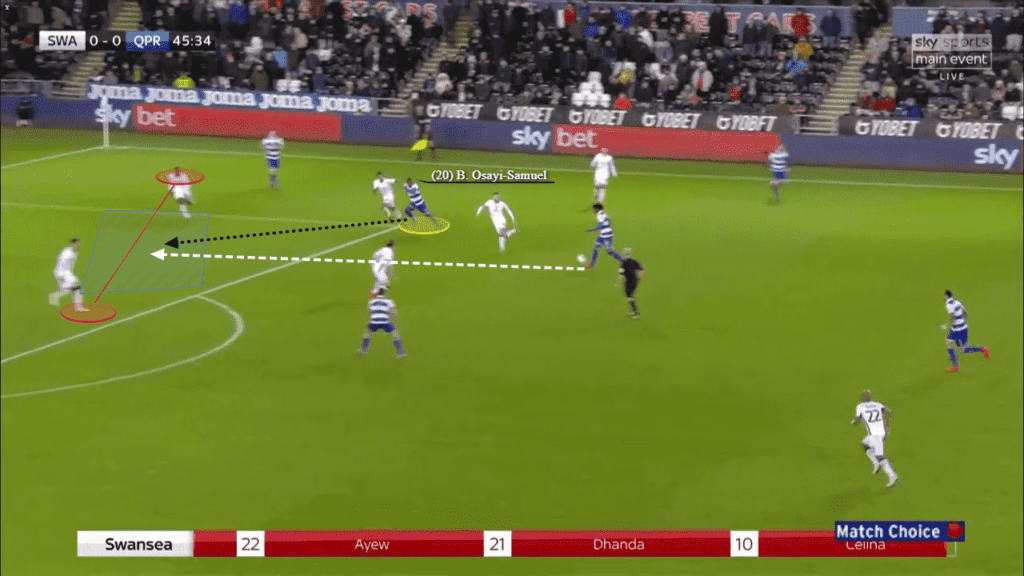 Capable of venturing infield and smoothly rotating across the frontline, while also occupying good positions inside the box, his slick movement has benefited his team solidly. Moreover, the way he pins and draws multiple markers out of shape, with and without possession, is a great tool for freeing up space for teammates.

His manager’s comments after QPR’s 6-1 thumping of Cardiff City evidence how highly he’s rated within the club. “I’m not sure many teams have that blistering pace. As long as he knows how to use it and that’s the key for him learning the game,” gleamed Warburton.

“He’s working so hard. He’s got that sheer pace which terrifies defenders and when he uses it wisely like he did today he looks a real handful. I’m delighted for him and it’s good for the crowd to see a player who gets them off their seats which is what you want.”

Intuitive, powerful and giving his team so much impetus on the offensive end, the ever-improving youngster’s future looks an extremely bright one. While it remains to be seen where he’ll be plying his trade next term, whoever secures his signature will be very happy indeed, for he’s a player with so much upside.