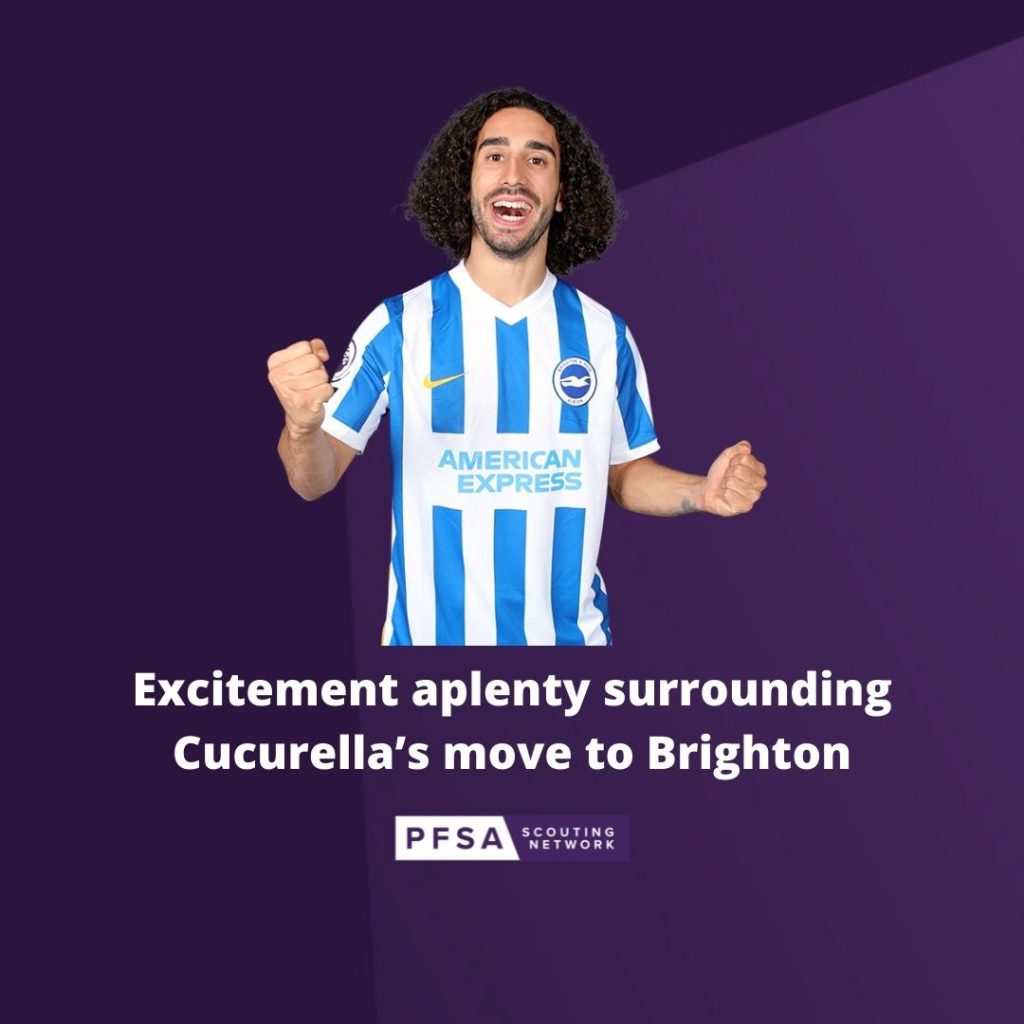 The capture of Marc Cucurella from Getafe is yet another exciting piece of business by Brighton and Hove Albion.

With news constantly circulating that he was joining the Seagulls in the summer and nothing materialising, many began to wonder whether Brighton would ever get their man. But they eventually agreed a deal with Getafe before the window closed, securing the Spaniard by paying the desired £15 million.

“We have been keen to bring Marc to the club, and we are really pleased to finally welcome him here and are excited to begin working with him,” manager Graham Potter explained.

“He has had a fantastic education in the youth teams at Barcelona and he has gone onto make a real impression in La Liga and within the national setup. He is a versatile player, and he will add competition and options to the squad.”

Versatile and tactically adaptable, Cucurella’s ability to play as either a left back, left wing back or left winger will be a real asset for Potter, who can use him as he sees fit depending on the opposition or his perception of his strengths. Seeing as Cucurella has largely been used as a winger at Getafe and during a previous spell at Eibar, it’ll be interesting to see where Potter deploys him.

Reliable, durable and consistent, these attributes unquestionably will have endeared him to his new team, for he’s a player that gives his all and rarely lets his performance levels slip.

A powerful presence on both sides of the ball, the 23-year-old will inject plenty of bite, intensity and quality to Brighton’s ranks.

Technically sound and proficient in possession, which is to be expected from a former Barcelona youngster, Cucurella’s good first touch sees him well placed to execute his actions. Full of drive and intent on the dribble, opponents have found him challenging to handle due to his speed, crafty alterations in pace and direction and nifty feints or shimmies to gain separation or beat his man.

Possessing a low centre of gravity and top strength, this, in combination with his knowledge of how to adapt his receiving angle, means he can hold his own under high pressure situations to protect the ball or weave away from danger. Moreover, this aspect of his game also helps him ride challenges and win fouls in dangerous areas.

Capable of hurting opponents especially in transition (just like at Getafe) or in controlled build up, his ball carrying should serve his new team well in the fast paced Premier League, where he’ll be afforded many opportunities to maraud forward on the counter.

Although he didn’t get to show off his true passing skills at Getafe and Eibar, he’s certainly competent in this regard. Usually precise in close quarters with his combination play and one touch passing, this helps move opposition blocks around to then exploit an opening. Alert to the movements of teammates, he’s shown he can pick them out with measured through balls in behind or pinpoint them with line breaking passes to feet. 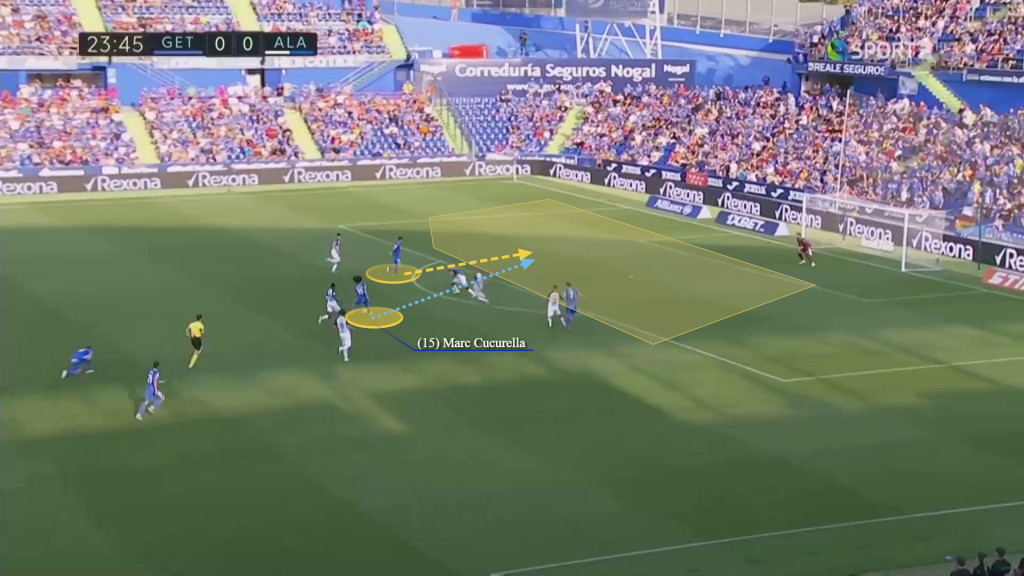 His crosses and cutbacks are at a high level as well, as he’s displayed some nice variety to his game here that sees him strike his deliveries with either power, dip, loft or swerve depending on the situation. Wrapping his foot around the ball ideally and getting his head over the ball, his technique has been impressive, allowing him to make the desired contact after he’s assessed his options. 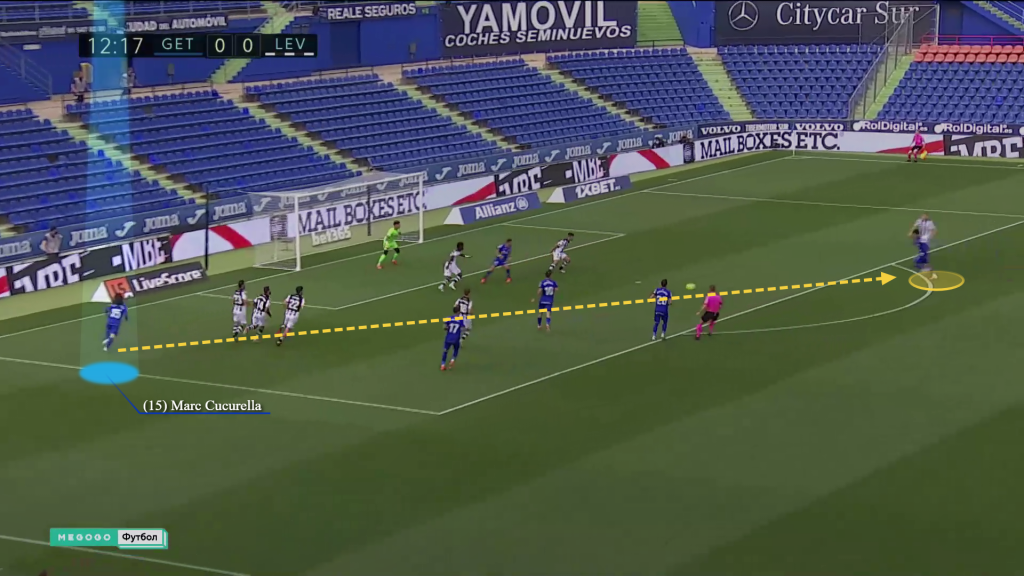 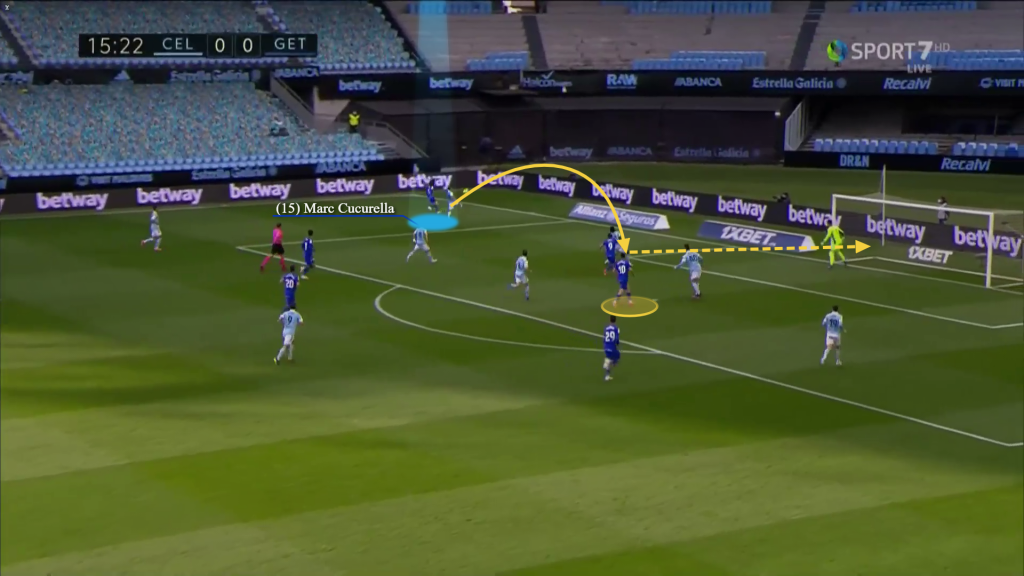 His clever movement and understanding of when to venture into vacated space is another highlight. Quick to notice when a teammate draws their man out and if he can be an option for the next pass, he smartly pounces. Whether it be forming an overload out wide, making a blindside run into the box, embarking on a run in behind or positioning himself for a knock on or flick down, Cucurella’s shown his aptitude in this area. 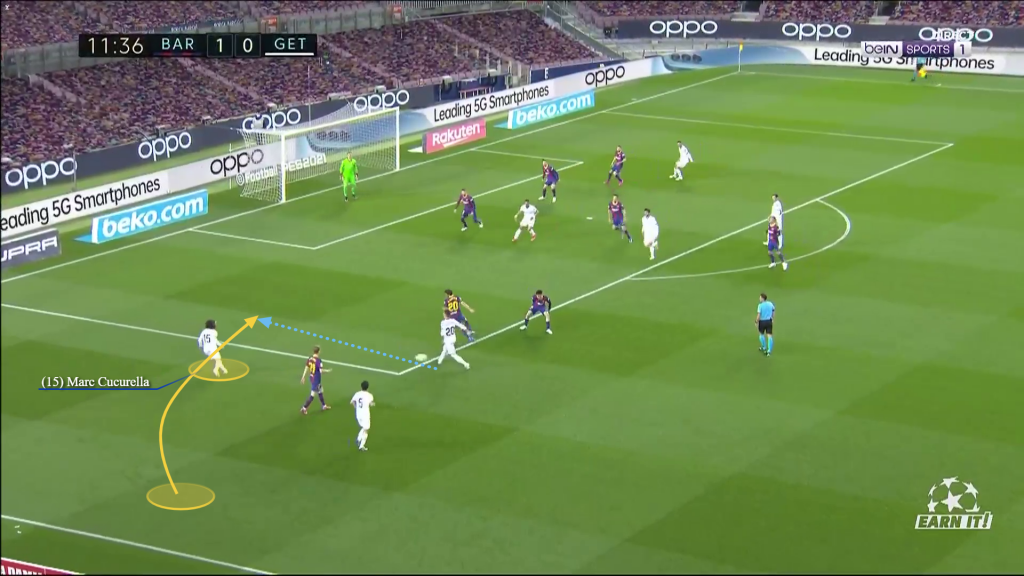 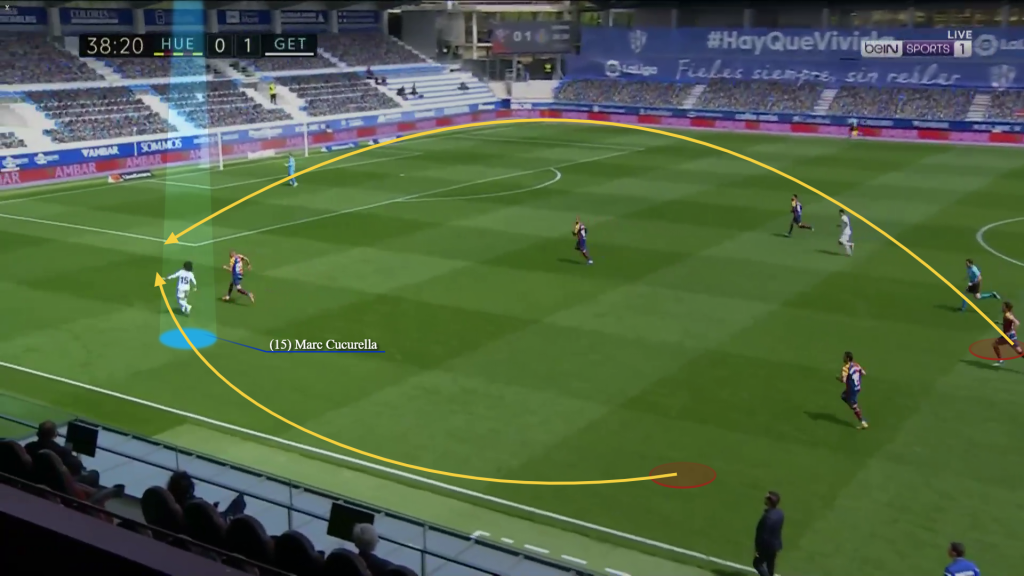 The way he’s performed rotations to mix things up and can create space for others with his movement or pinning of markers adds additional upside and encouragement that he’ll fit into the Potter’s tactically astute framework.

Meanwhile, on the defensive end, he’s a tremendous weapon, for he presses relentlessly and is intelligent when doing so. Proving himself as one of the elite defenders among players in his position, his intensity, work rate and clever angling and directing of his harrying set him apart.

Excelling at timing his pressing just when the pass is on its way to his target, this ensures he arrives to get in the face of his opponent to limit their time to execute their actions. On top of giving his foes minimal time and space, how he uses his cover shadow to block passing lanes behind him compounds issues for his adversaries. 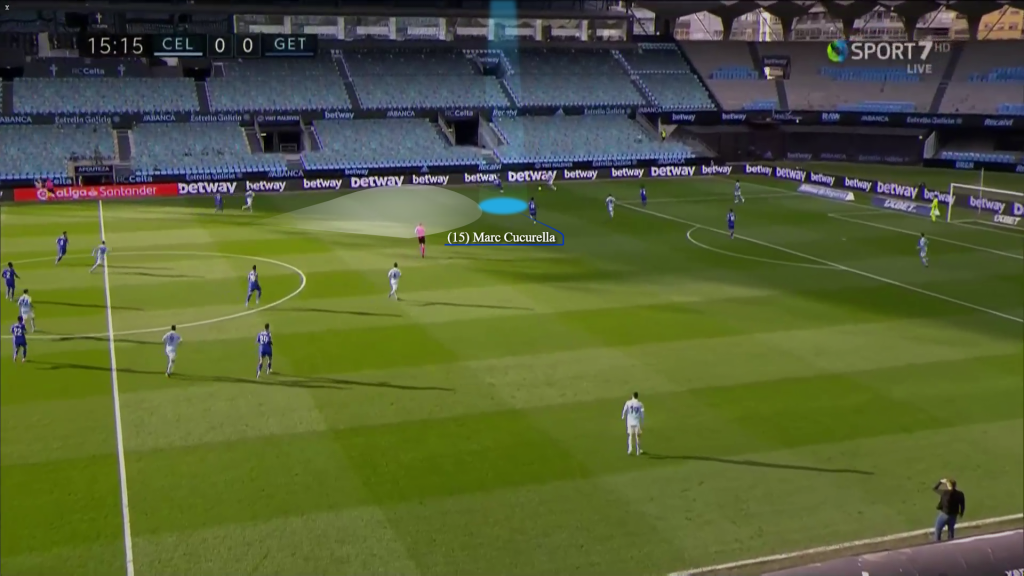 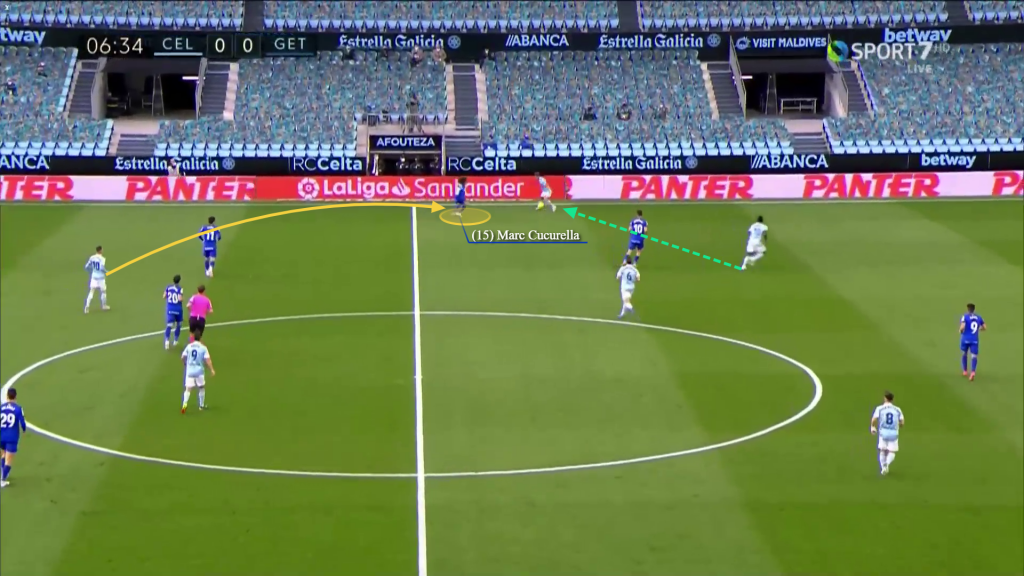 Boasting rapid acceleration from his crouched, powerful posture, he jets across the turf quickly to bring the heat in his quest to regain the ball. Sharp at responding to triggers such as his marker receiving with their back to goal, in an open posture, if a poor pass is on its way, if they’re near the sideline or if they’re on their non preferred foot, this compounds issues for his foes.

Feisty in the challenge, he goes in wholeheartedly with his tackles and interceptions, as he notably imposes himself on his man.

Having played under two excellent coaches in Jose Luis Mendilibar and Jose Bordalas at Eibar and Getafe respectively, who instruct their teams to press vigorously, he joins Brighton extremely well versed in this regard.

Coming to the Seagulls with his best years ahead of him and already establishing himself as an elite operator in La Liga, all the signs are that he can continue his upward trajectory working under Potter’s expert tutelage.

At just 23 and with huge scope for improvement, Brighton’s recruitment team definitely deserve credit for bringing in another hugely talented young player.