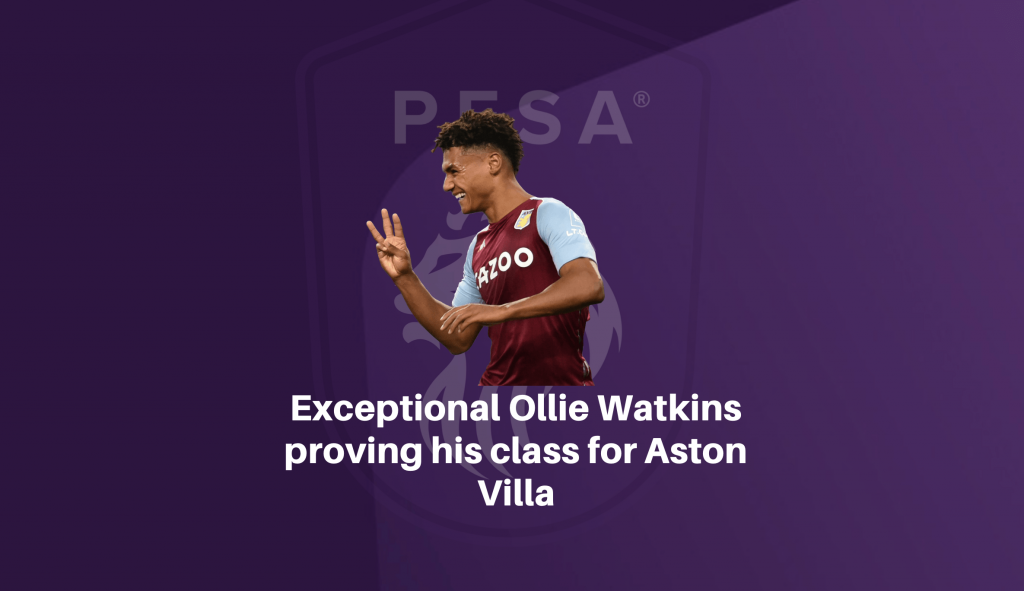 Having just notched his 13th Premier League goal this season during Aston Villa’s efficient 2-1 win over Everton, Ollie Watkins yet again showcased why he’s been one of the signings of the season.

Joining in the summer for a club record £28 million from Championship side Brentford, the Englishman’s adapted exceptionally to the highly demanding Premier League. In a campaign where he has emphatically vindicated Villa’s decision to splash the cash on him, his form has crucially been rewarded at international level too, where Gareth Southgate handed him his debut in March against San Marino, with him marking the occasion with a goal.

Considering he’s only really played one term as a striker prior to leaving for Villa, as he was largely used as a winger, this makes his superb centre forward displays all the more impressive.

Typically deployed as the striker within Dean Smith’s 4-2-3-1, the 25-year-old has led the line with aplomb. Capable of hurting his opposition in many ways, this means he’s been a nightmare for defenders to contend with.

So intelligent with his movement, he’s extremely proficient at identifying openings to exploit within the opposition backline. Quick to spot gaps between defenders, if they’re caught ball watching, are flat footed or tied up with a marking assignment, he’ll pounce rapidly. Moreover, the fact he times his runs so shrewdly when the ball holder is positioned to see him and the ball is on their preferred foot, adds to his nuisance.

It’s also been important to note how he’ll peel off the back shoulder of markers, uses zig zags and double movements to gain separation, embarks on damaging out-to-in diagonal runs to exploit the blindside and uses his sensational speed to heighten his menace. 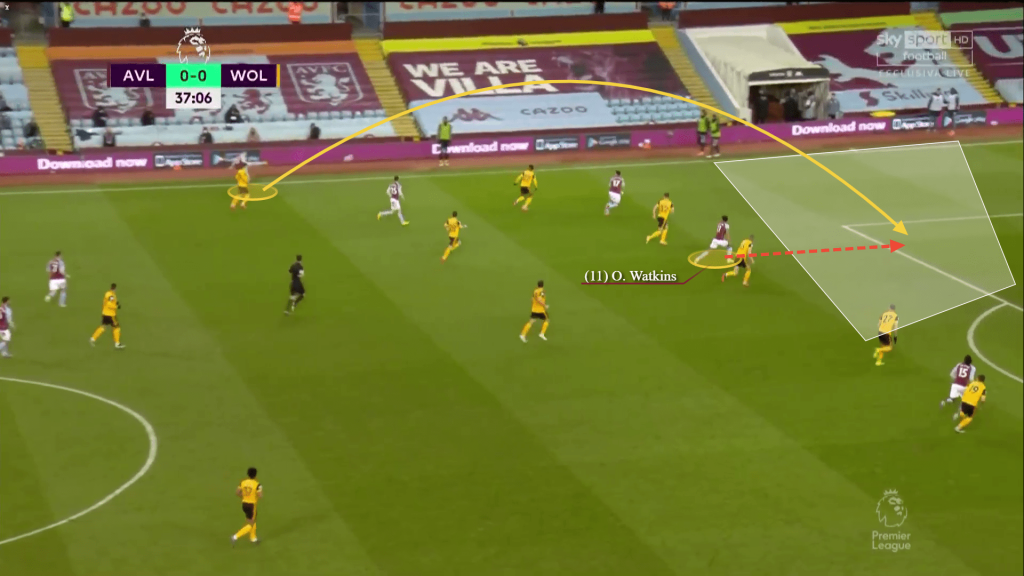 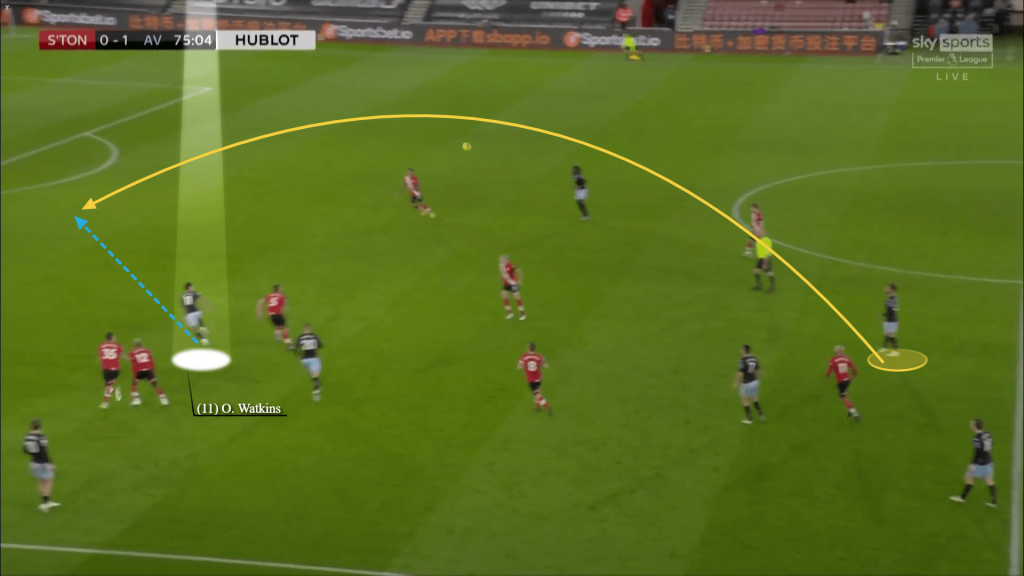 Forever stretching, unbalancing and asking questions of opponents, his deep threat not only sees him well placed to get into promising goal scoring locations, but also helps create space for others by dragging defenders about.

His nous in this compartment notably transfers over to when he motors into the box, with him quick to see where the best spaces to attack are. Whether attacking space in front of the keeper centrally, holding his run as the defence collapses deeper, edging towards the near post or drifting in at the back post, he’s been an elusive man to keep tabs on.

Calibrating his runs effectively depending on who’s firing the ball in, the trajectory of the delivery and where his teammates and opponents are situated, his instinctive reading of the play has served him well. 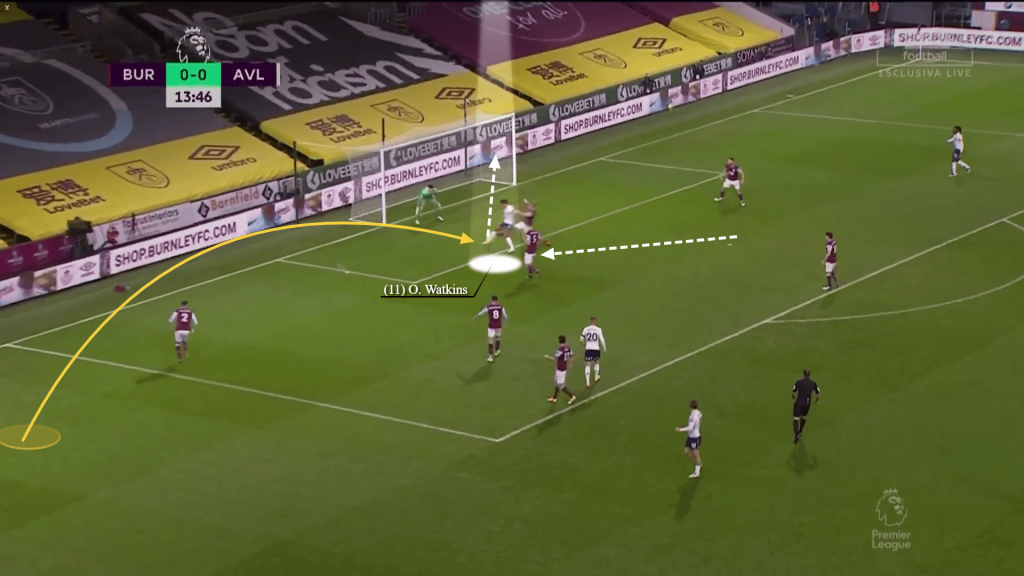 The way he’s astutely taken advantage of gaps in behind onrushing fullbacks and between markers on the counter attack has been another asset for Villa, for he offers them a fine outlet to launch forward and attack unset, retreating backlines.

Meanwhile, he’s proven how useful he can be when dropping deep with his back to goal, for he uses his size and strength to hold the ball up and protect it from his markers. Picking his moments when to check towards the ball, he’s been proficient at finding space between the lines, which has enabled him to link midfield and attack or maintain possession while a viable outlet arises.

When it comes to his finishing, Watkins has provided plenty of evidence what an accomplished finisher he is. The scorer of a wide range of goals, he’s found the back of the net with power, placement, poaching efforts from close range, slick headers and the odd screamer from range. If he needs to, he can clinically finish rebounds and get shots off with minimal back lift, as his awareness and urgency has been admirable. 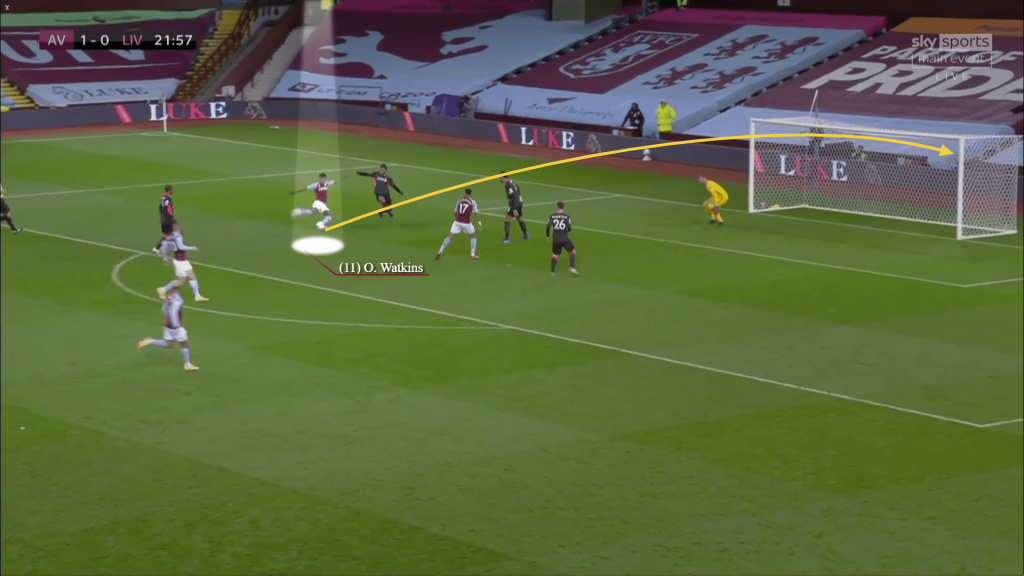 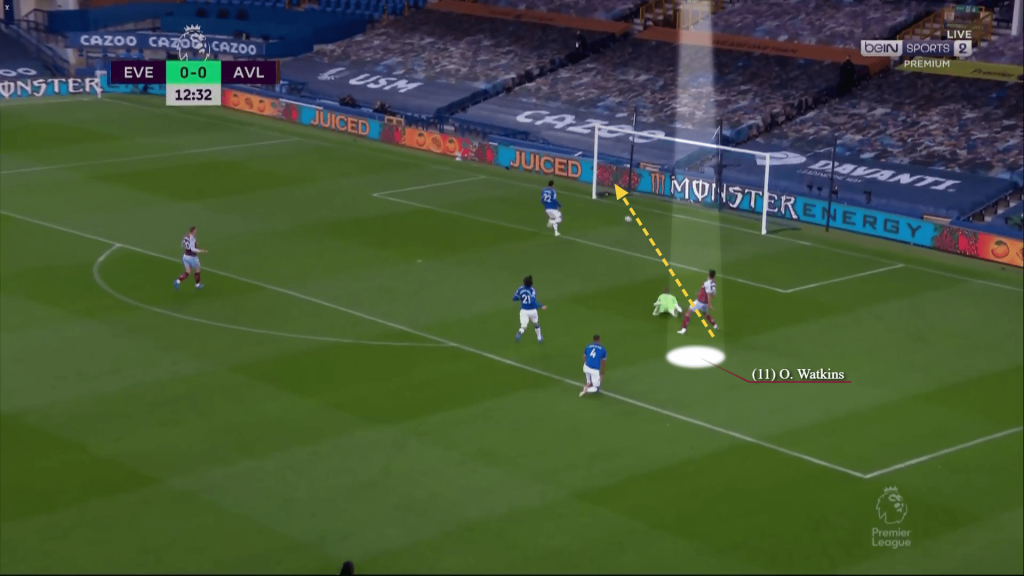 Seeing as he was an outstanding winger, it’s unsurprising that he’s a very useful ball carrier. Skillful and competent at outfoxing opponents with his searing speed, smart feints, neat body swerves and crafty changes of pace and direction, he relishes being isolated in 1v1 scenarios. It must be said, when he has time and space to surge forward on the break, he’s especially lethal, as he gains territory rapidly and disrupts defence units successfully.

Accompanying the aforementioned with his coherent passing, he’s shown he can assist greatly with connecting passages and creating chances for colleagues. Be it via one touch lay offs and flicks, incisive through balls, smart cutbacks and smooth passes to change the angle of attacks, he’s been good at setting up chances and recycling possession. 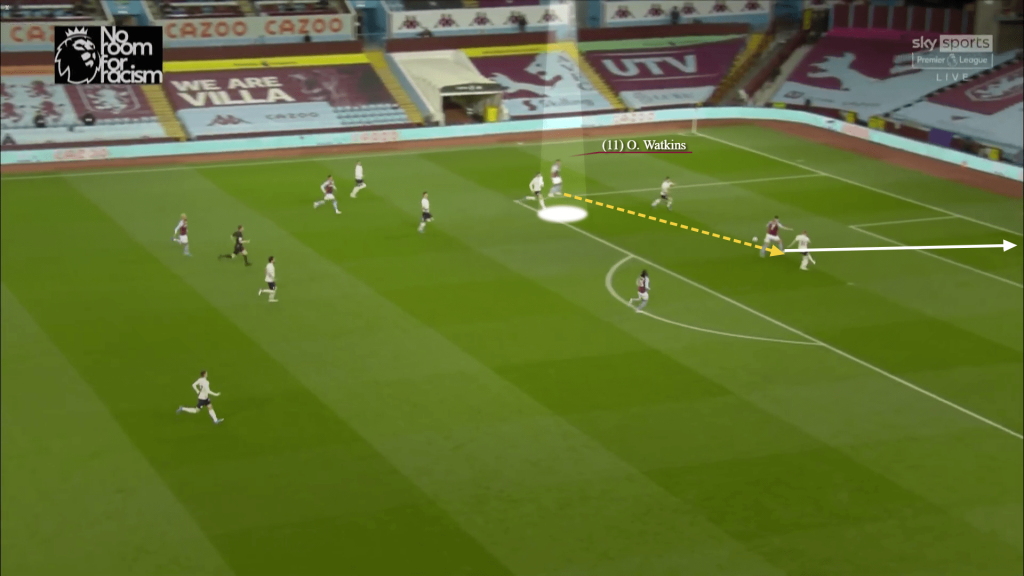 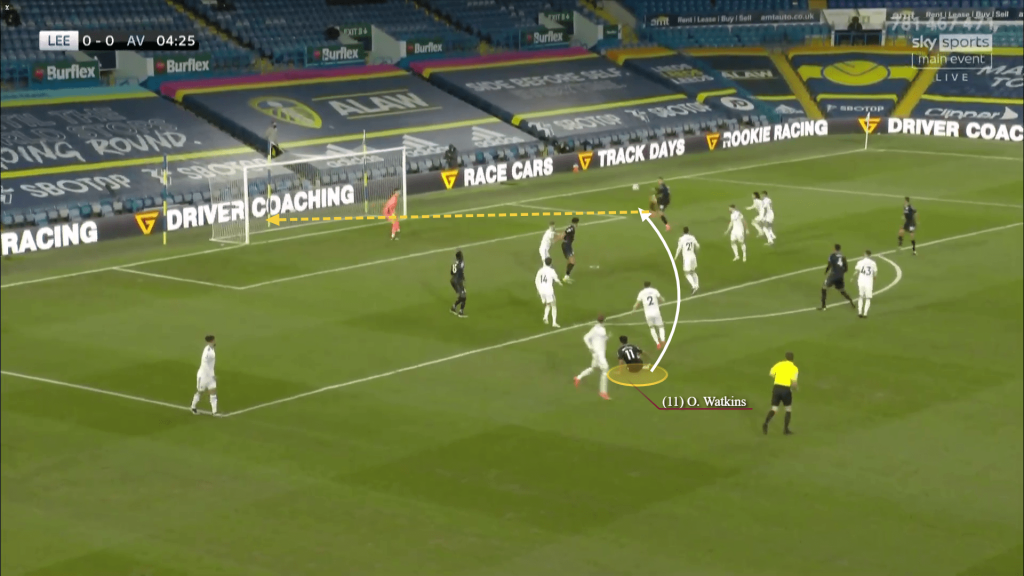 In terms of his defensive efforts, Watkins’ pressing has been outstanding, for his energy has been crucial in causing turnovers and forcing his targets into poor decisions. Proficiently curving his pressure to block passing lanes behind him and using his speed, this compounds issues for his foes, which was illustrated aptly when he dispossessed Mason Holgate before surging upfield to score recently.

His swiftness across the turf sees him slow down counters rapidly and backwards press to win back possession from the blindside of opponents, thus punctuating why he’s one of the premier pressing forwards in the league.

Always looking to get involved and eager to make things happen, the challenging to contain Watkins has certainly been one of the most exciting players to watch in the Premier League. “Ollie has been a very good investment and one I am thankful the club took,” manager Smith explained.

“We wanted a player who fits our profile which is young, hungry with good qualities. We believe he is coachable and can grow in value. He has certainly ticked all those boxes so far and will continue to do so.

“He has not reached a ceiling and is probably disappointed with his goals return even though he is in double figures. That is a sign of the mental state Oli has. Just getting into the England squad won’t be enough knowing Ollie and what he is like. He will want to keep getting better and get on the pitch and start games for England and want to score goals for England, which is the way he works and thinks.”

Although he’s endured some rough patches and missed many presentable chances, this will only spur him on to keep improving.

Going from strength to strength and establishing himself as one of the top forwards in the Premier League, he’ll be hoping to finish the season in style, not only to end the term on a high but also to secure his place in Southgate’s England squad for the Euros.