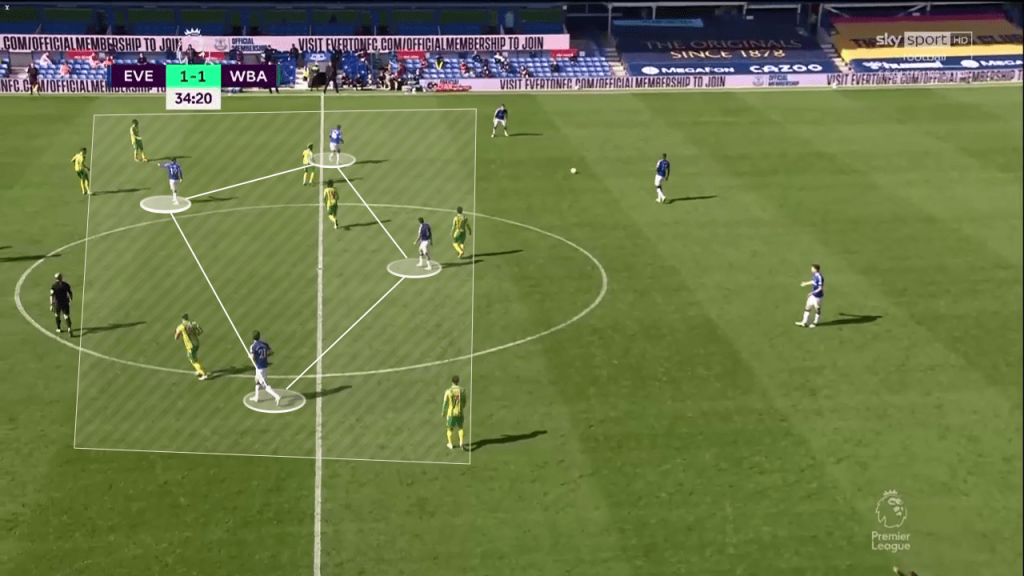 With Carlo Ancelotti recognising the need for an overhaul of his Everton midfield ahead of the new season, this is precisely what he did.

Bringing in James Rodriguez, Allan and Abdoulaye Doucoure for a combined fee of roughly £65 million, the trio have already proven their worth. Knowing Rodriguez from his time at Real Madrid and Bayern Munich and familiar with Allan having coached him at Napoli, these men have had little issue adapting to his methods. Meanwhile, in the case of Doucoure, and his vast Premier League experience has seen him hit the ground running.

“We are working to have a good season and try to be competitive. With these players the squad has improved and I think we are going to compete.”

So far, Ancelotti’s nominal 4-3-3, which often morphs into a 4-4-2 diamond chiefly due to the infield movement of James Rodriguez from the right flank, has worked wonderfully when all his guns are fit.

Allan and Doucoure have then taken their place in central midfield alongside Andre Gomes, as the quartet have been a key driving force for the Toffees on both sides of the ball.

To start with their offensive output, and many impressive signs have been evident at this early stage. Keen to dominate and be on the front foot, this has provided an insight into their interesting mechanics.

So hard for opponents to come to grips with due to their persistent movement and asymmetric shapes, they’ve done a brilliant job of manipulating foes’ defensive blocks. Possessing a strong understanding at this early juncture, the way they’ve rotated positions smoothly has been a highlight.

As can be seen in the example below, the multilayered rotation, which sees Allan switch with Gomes, then James swap with Gomes, illustrates their promising understanding. 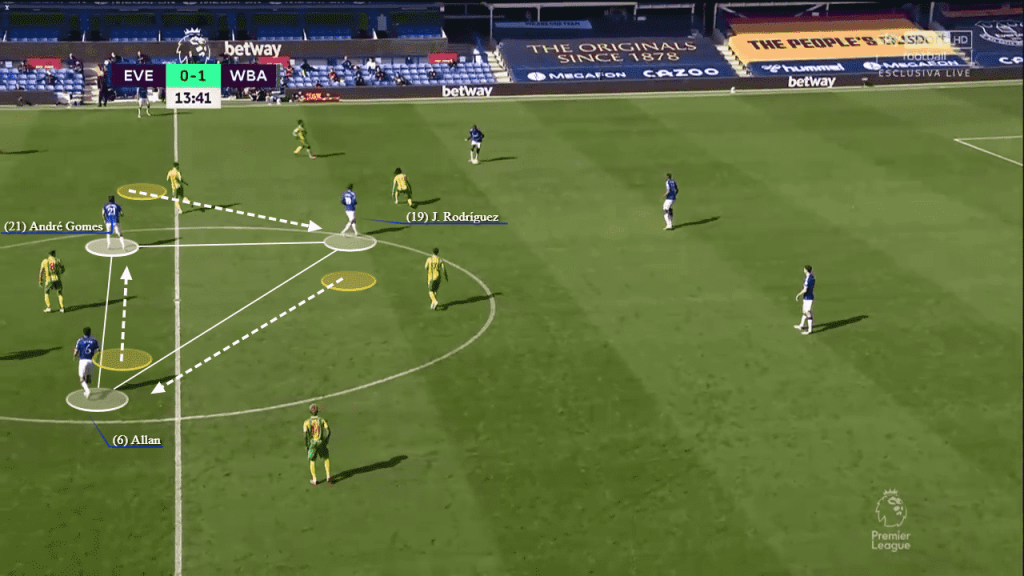 Indeed, their positioning and knowledge of their roles has been key in generating key overloads in build-up and in central areas, as they’ve beaten the press. Moreover, the eights splitting smartly to draw out markers, so passing lanes into the forwards can be created, has been another notable feature. 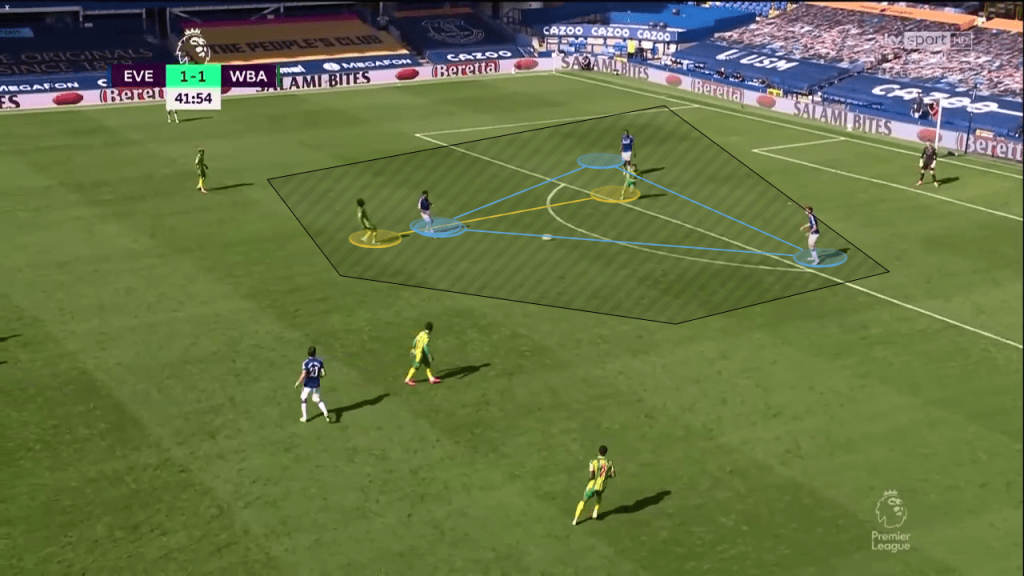 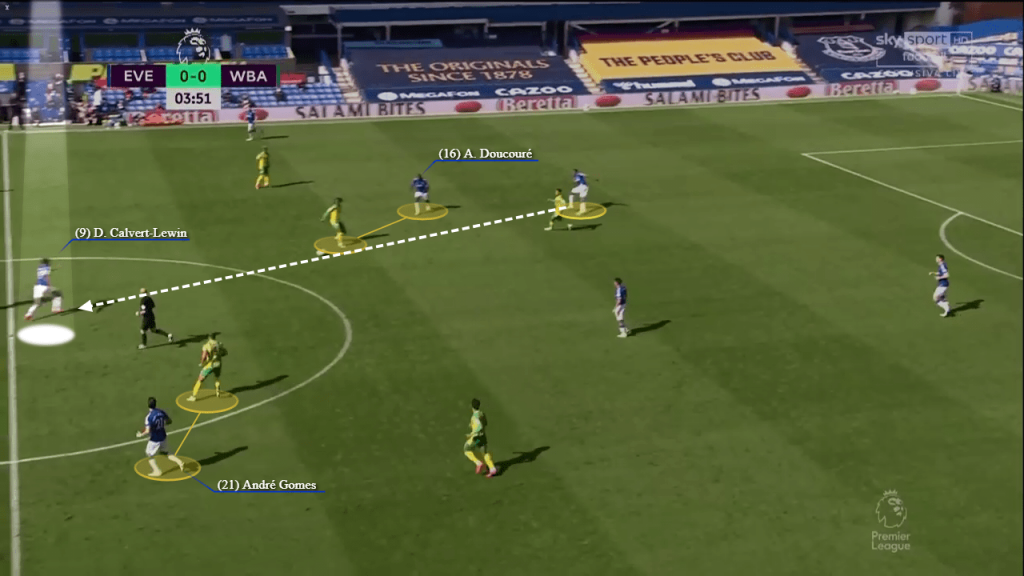 Also pinning and drawing foes out of position with driving dribbles and smart decoy runs, adversaries have been effectively unbalanced, thus allowing Everton to access spaces in between the lines and in the half spaces. It’s also important to note when their attackers have received in these areas that Everton’s mids will offer viable options to receive lay offs in ideal forward-facing postures. From here, they can assess their options and move the ball quickly upfield. 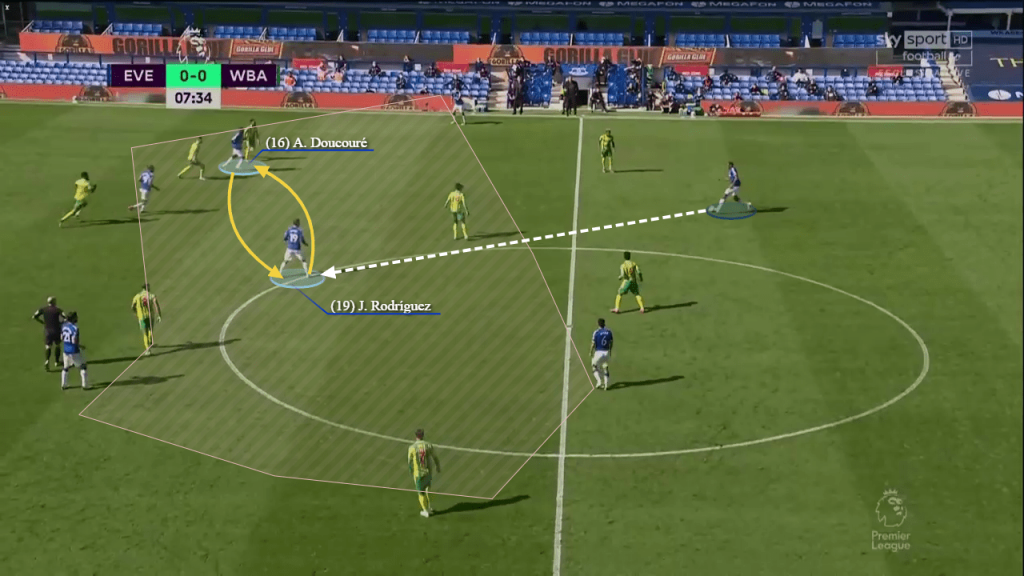 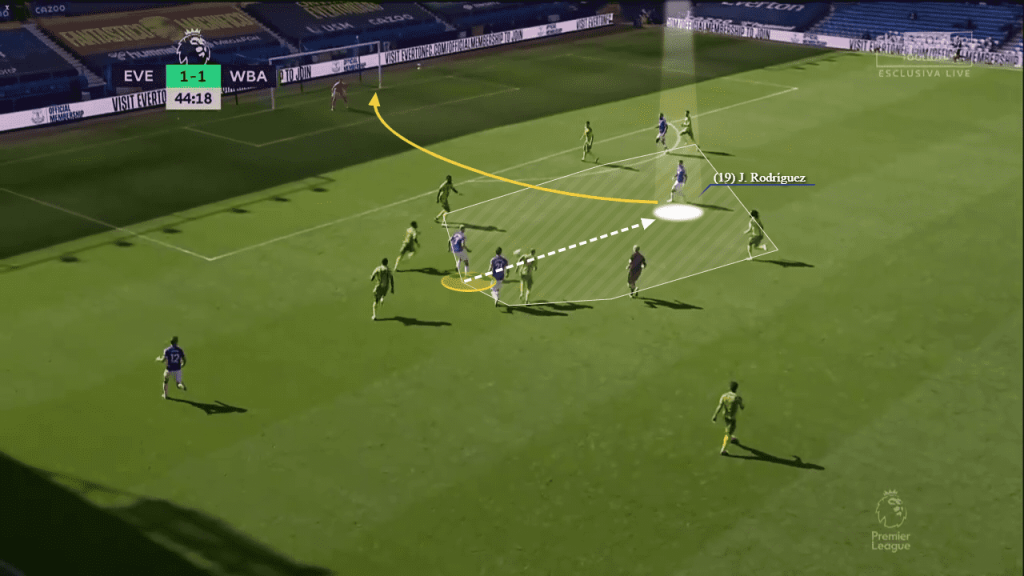 The aforementioned has been especially beneficial when either a midfielder or forward has come short, which has subsequently lured out an opponent, to produce space in behind for either a winger, fullback or a midfield runner from deep (something Doucoure specialises in). 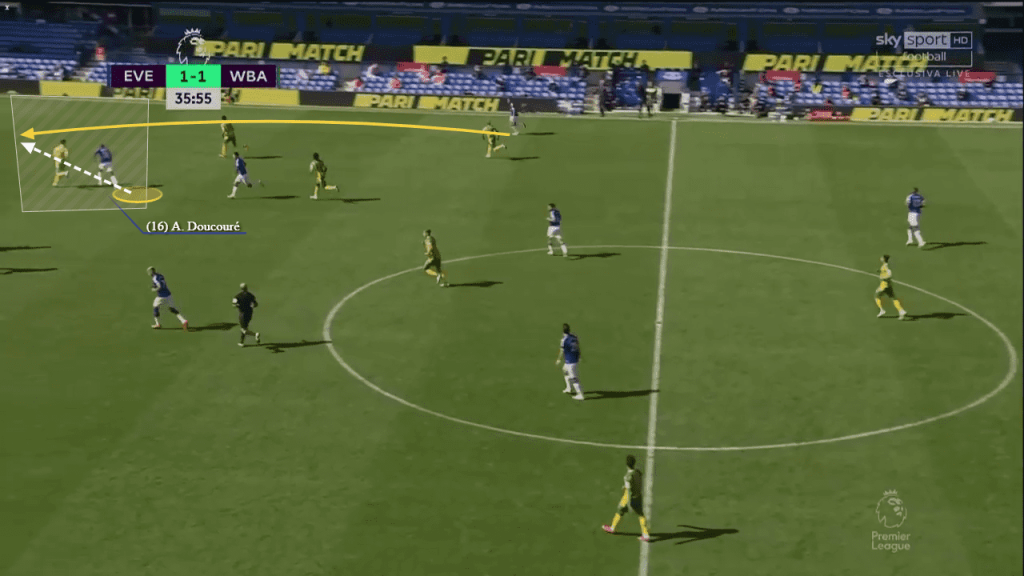 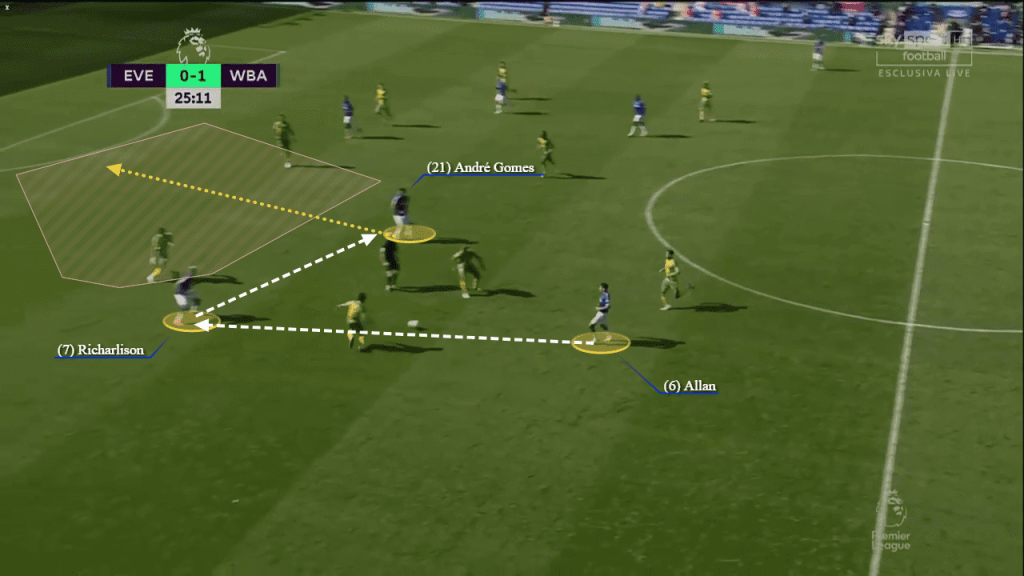 Further upside has arisen from how they’ve implemented the overload to isolate principle, where they’ll push to one flank to ensure their opposition shifts across. Then, once this has been achieved, a rapid switch will be struck to the fullback or winger on the far side, who can be isolated vs. their opponent to attack the final third.

Already showing a strong understanding of their roles and responsibilities, Everton’s offensive framework’s been littered with upside. With Allan the holding midfielder, Doucoure in the right central mid slot with plenty of licence to embark on penetrative runs from deep, James in a free role on the right wing and Gomes as the left centre mid usually playing slightly deeper than Doucoure to offer control, they’ve found a nice balance.

Meanwhile, on the defensive end, the new men have added some much-needed grit, intensity, energy and aggression. With Doucoure’s athleticism and long legs and Allan’s positional sense and ferocity in the challenge, Everton have been a formidable force in the middle of the park.

Factor in their pressing prowess, where they’ve been rapid to press and counterpress to limit opponents’ time on the ball and force turnovers, this has amplified their worth. How they’ve used their cover shadows to block passing lanes behind them when they’ve harried warrants mention too.

Not to be outdone by the tireless, ball-winning machine in Allan and the engine of Doucoure, James has also put in a real shift. Tracking back diligently and joining in the first line of press with gusto, the Colombian star’s definitely pulled his weight. By chiming in with 2.76 interceptions per game, one tackle pg and 1.38 pressing recoveries pg, this has demonstrated his willingness in this phase.

Although it’s still early days for the trio of recruits, who have all joined in the prime of their careers, the signs are extremely promising that they can propel Everton to another level this campaign. Complementing each other so well and bringing some much needed experience and quality into Ancelotti’s team, the Toffees have transformed into a more balanced, energetic and dangerous outfit.

Now boasting one of the most impressive midfield units in the Premier League, Everton are primed to enjoy a fantastic season under Ancelotti’s expert tutelage, as there’s been no doubt his presence and reputation has been a real game changer in attracting the big names to Merseyside.