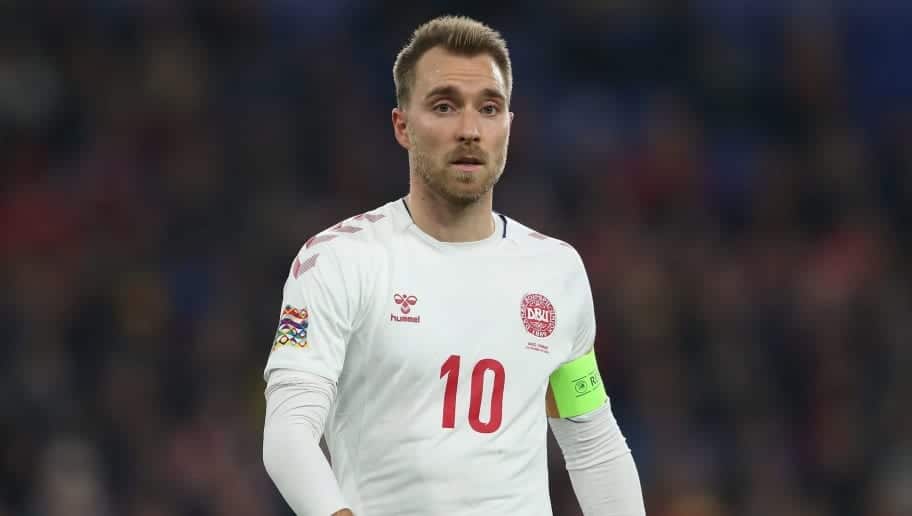 Christian Eriksen yet again demonstrated his incredible talents on his way to inspiring Tottenham Hotspur to an accomplished 3-1 victory over Leicester City.

In a match where he supplied a masterful assist for Davinson Sanchez’s opener, his ninth of the season, and blasted home a peach of a goal from outside the box, the Dane’s impact was unmistakable. 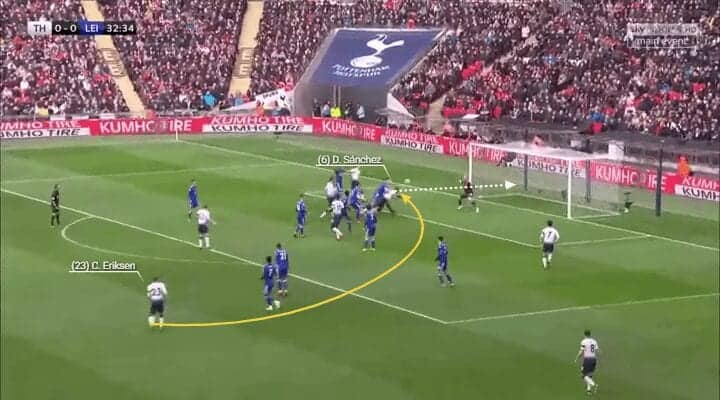 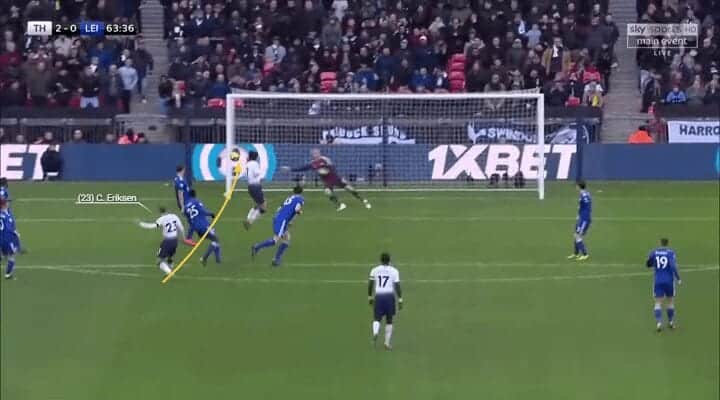 Having been performing below his usually lofty levels in recent weeks, this was a timely return to form for the 26-year-old ahead of Spurs’ massive Champions League clash with Borussia Dortmund of which they took all the glory!

Operating from his central attacking midfielder station, Eriksen demonstrated why he’s so important in terms of connecting play, manufacturing openings for himself and creating opportunities for others.

Starting with his calculated movement, and he did a customarily crafty job of identifying openings within the Foxes’ structure to exploit. Using his persistent head checks to update his mental imagery of his surroundings, sharp timing and nous to move out of opposition cover shadows, this enabled him to give his teammates constant options to progress attacks. Exceptional at finding vacant openings in between Leicester’s lines of midfield and defence, in the half spaces, out wide or when dropping deep into true central midfield locations, Claude Puel’s men struggled to deal with his neat variations. 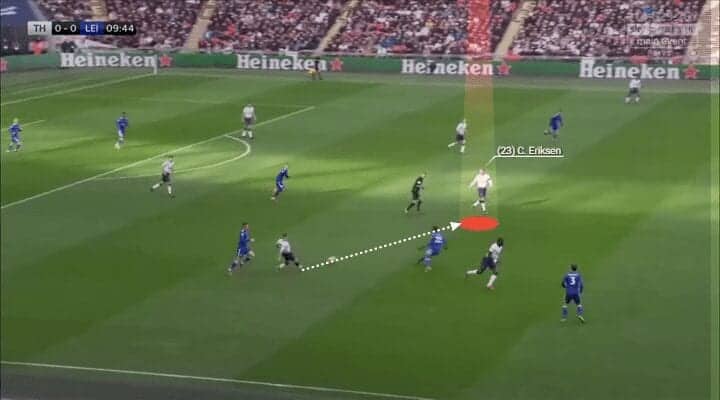 Furthermore, his astute rotations with his fellow attackers, chiefly Son Heung-min but also Fernando Llorente, were also crucial in manipulating their adversaries’ deep block. Prime examples arose when the South Korean would check towards the ball, which would then serve as a cue for Eriksen to push up and maintain depth to Spurs’ attacks. He did so with aplomb through with his smart runs in behind, where he targeted the gaps in between defenders and took advantage of them being caught watching a forward or the ball. 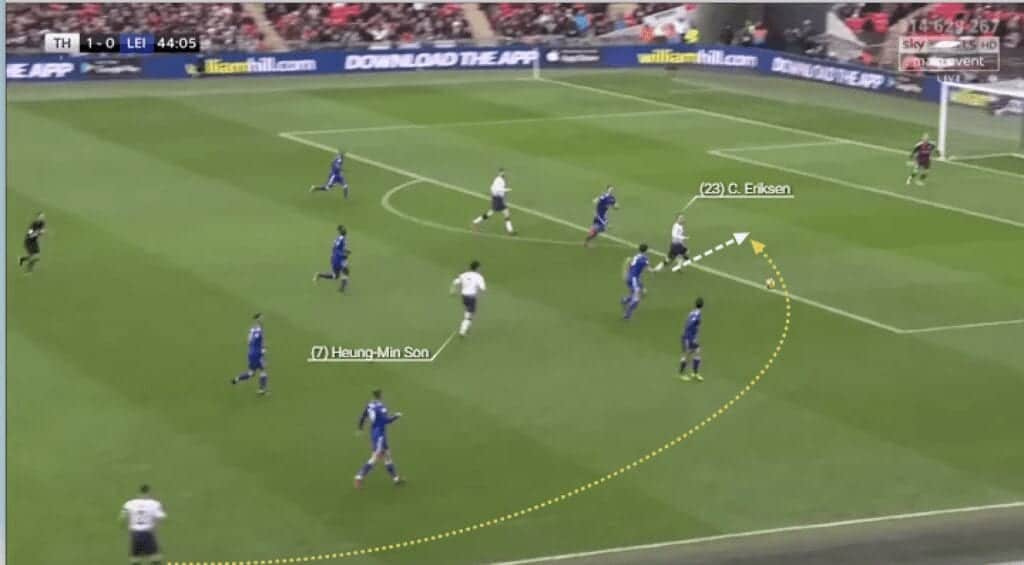 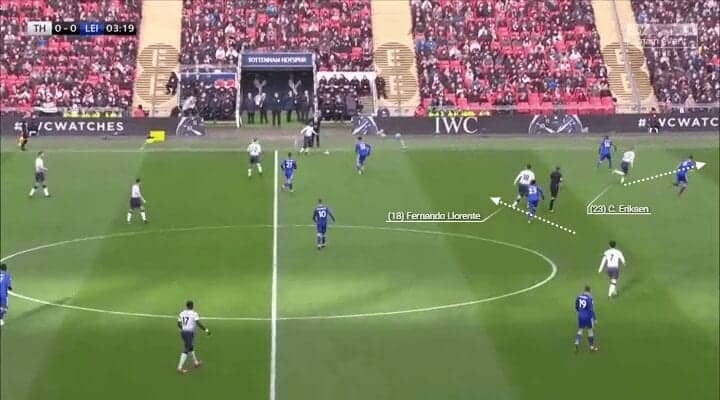 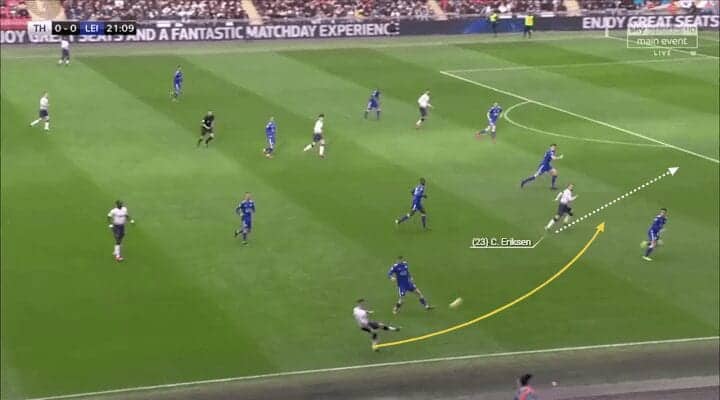 By often positioning himself in close proximity to his forwards, Eriksen served as an excellent link man to Llorente and Son, thus meaning they were rarely isolated, as he could feed them and use his razor sharp technique to put them into promising locations. In addition, he’d vitally provoke pressing actions from the Leicester defenders, something that helped grant his frontmen the separation they were after against a stubborn Leicester block.

Blessed with exquisite touch and control, the former Ajax maestro’s ball handling was terrific too, with this allowing him to control possession quickly, wriggle away from challenges and unbalance his foes with a slick feint, dribble or change of direction. 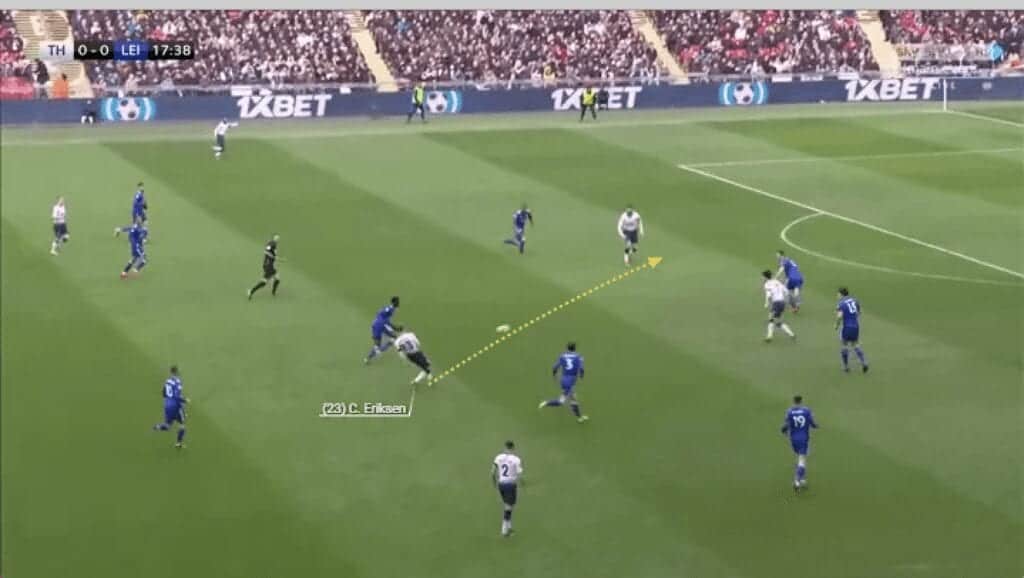 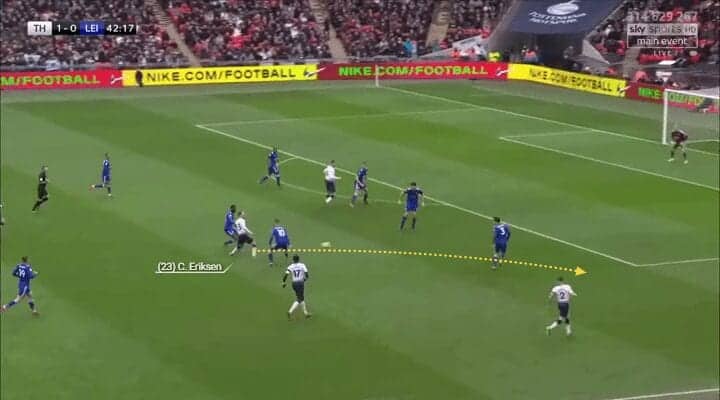 Coalescing beautifully with his teammates and producing two decisive contributions, Eriksen’s game changing capabilities were plain for all to see, as he gave Spurs so much clarity and creativity going forward.

By the numbers, his three shot assists, two touches in the box, two shots, one key pass and four accurate passes into the final third supplemented his goal and assist wonderfully.

With Eriksen’s future a hot topic of discussion, with Real Madrid reportedly keen on bringing him to the Spanish capital in the summer, his manager urged his star to remain focused on the present and keep performing at this level, saying: “We’ve spoken a lot about that, now we need to keep going, for him to continue performing in his best and of course I told you before he’s such an important player for us. We’ll see what happens.

“I think I’ve used a few metaphors in the past about Christian, remember related with my family and my dog. He needs to feel freedom to take his decisions. I think keeping going, I’m so happy with him and we’ll see what happens in the end.”

Whatever happens down the line will certainly be a fascinating development, but for now he’ll unquestionably be an integral figure as Tottenham are pushing to achieve great things both domestically and in Europe.