Emmanuel Dennis taking the Premier League by storm with Watford 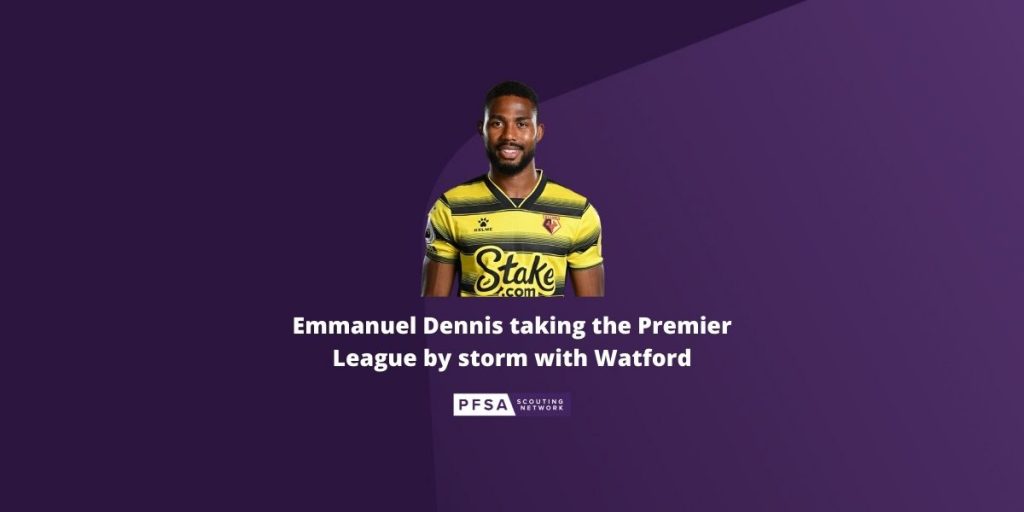 Since joining Watford in the summer from Club Brugge, Emmanuel Dennis’ impact has been nothing short of remarkable.

Already scoring six goals and supplying five assists, the Nigerian’s taken the league by storm with his output while helping Watford put some vital points on the board in their fight for survival.

Getting off to the perfect start by finding the back of the net against Aston Villa on his Premier League debut, he’s supplemented this with domineering displays against Leicester City, Norwich City, Everton and Manchester United. His incredible performances in the Hornets’ amazing wins over Manchester United and Everton were particularly memorable, for he grabbed two assists and a goal in both clashes.

Leading the way for Watford in terms of goals and assists, the electric attacker, who excels both as a striker or on the wing, has proven a real handful for defenders all over.

Transferring his finishing prowess into the EPL, the 24-year-old’s been hugely effective at taking his opportunities so far. Whether finding the back of the net with composed 1v1s with the keeper, finishes from tight angles, neat tap ins, quality headers, powered efforts or using placement, Dennis has been firing on all cylinders for Claudio Ranieri’s men. 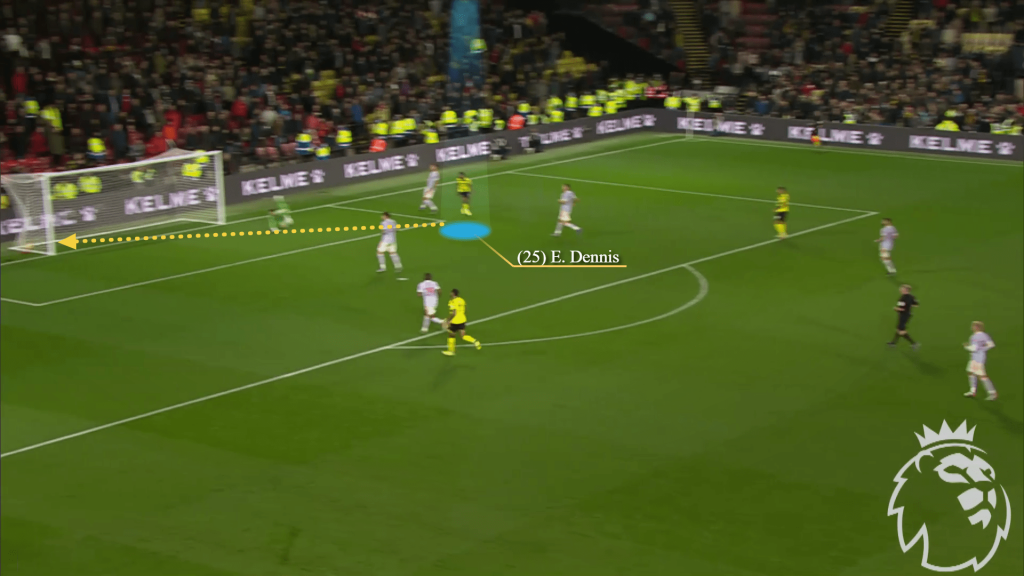 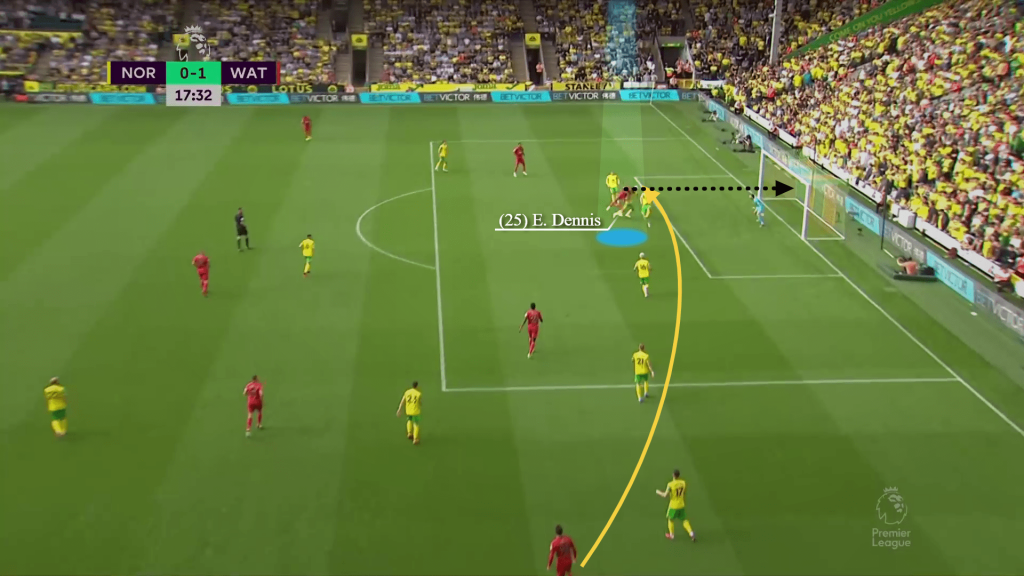 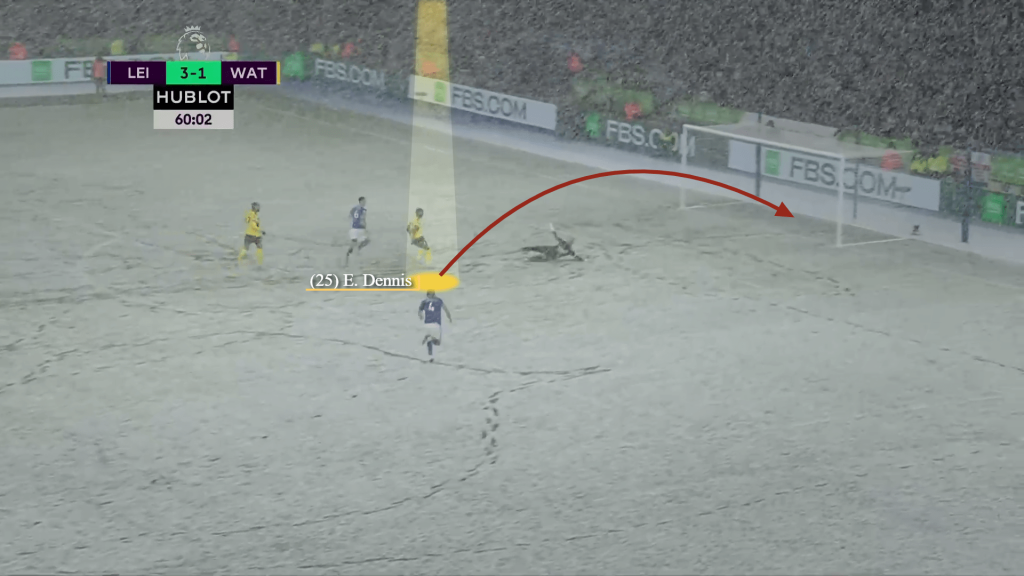 So confident when in range and not afraid to pull the trigger, Dennis has recorded a solid 0.51 goals per 90 from an Expected Goals reading of just 0.26 p90. Not bad at all considering he regularly plays in wide areas.

A good reader of the play, sharp at picking up the ball’s flight and alert to the tendencies of his teammates, these instincts have ensured he takes up good positions to enhance his chances of scoring.

Awake to his opponents’ positioning inside the box, the way he finds separation to be an option has been a highlight as well, for he notices if they’re ball watching or preoccupied before exploiting vacant areas to be an option. 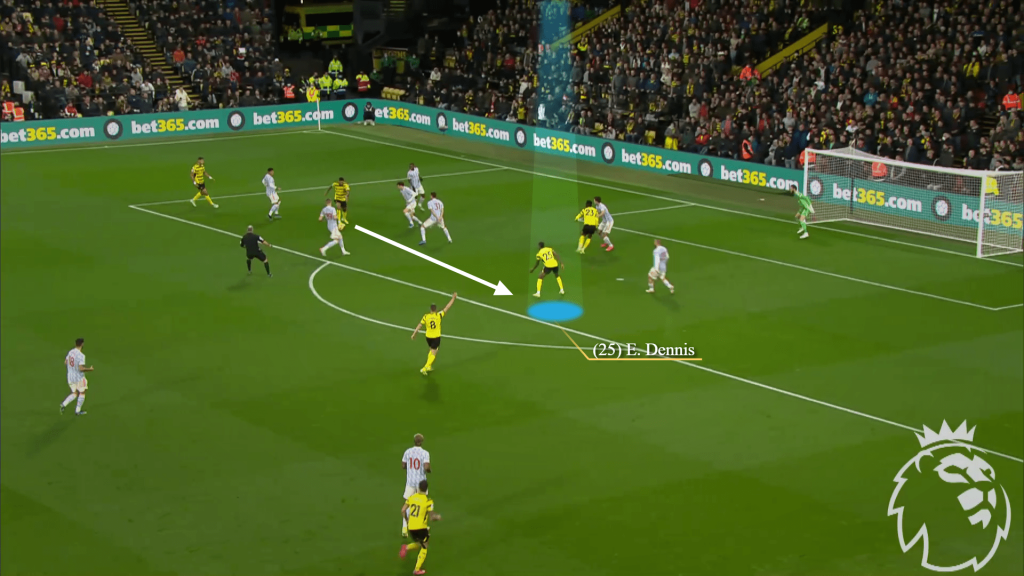 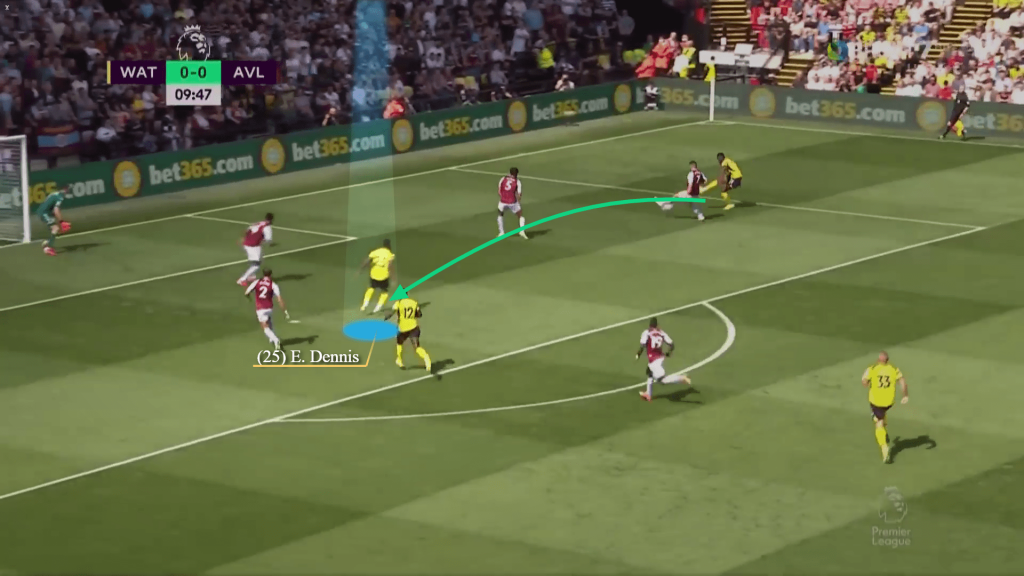 The former Club Brugge star’s a major threat running in behind too, for he not only uses his blistering pace to make headway but also his smart timing of his runs. Ready to pounce once a gap is available and the ball is on a teammate’s preferred foot, he gets going rapidly to get the jump on his man. How he curves and angles his runs so he can remain onside, plus exploits the blindside of markers to gain a dynamic advantage, have been extra keys for him. 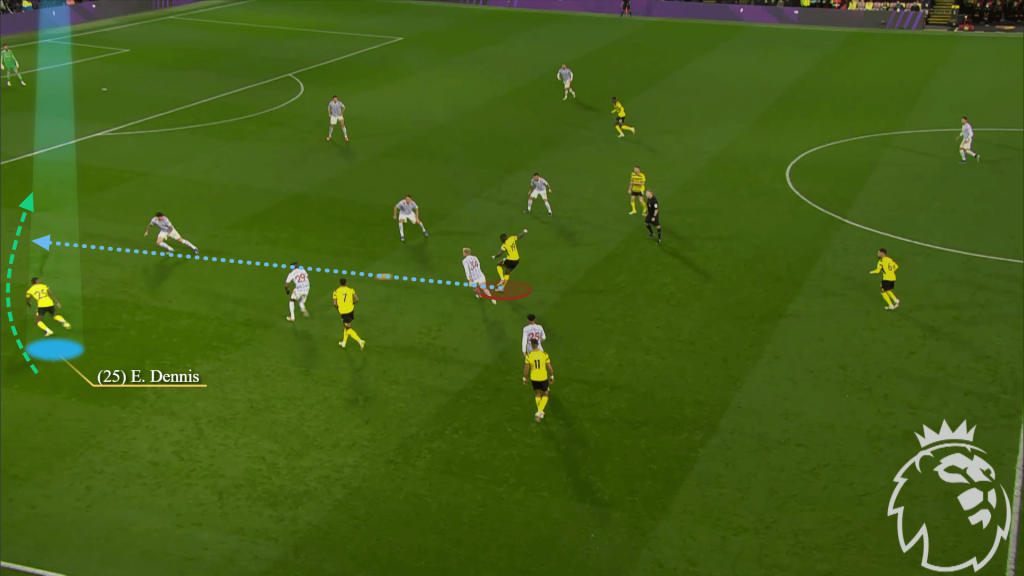 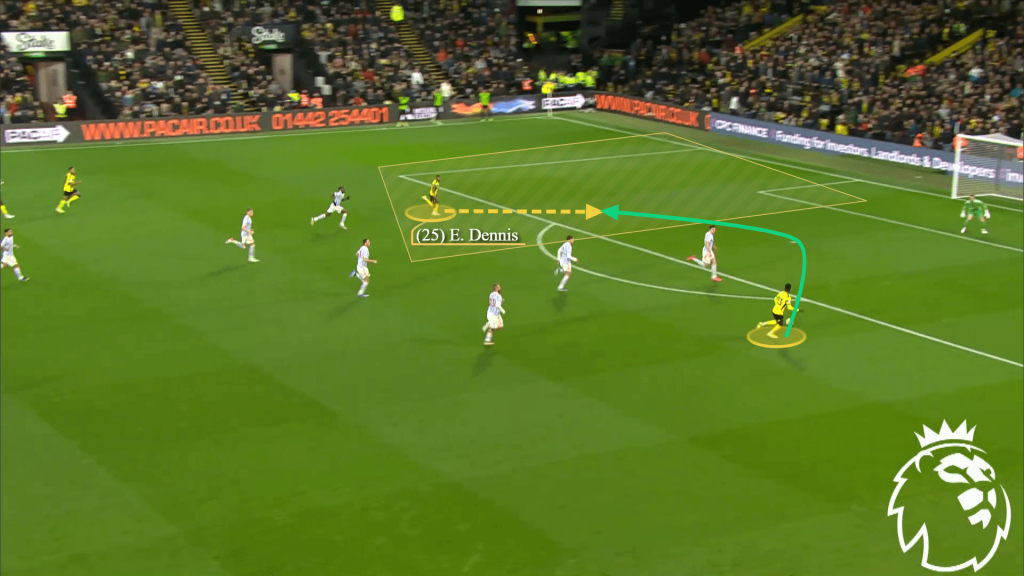 Executing frequent rotations with his fellow attackers, this compounds issues for defenders by altering their reference points and disturbing their rhythm.

Very direct and offering his team an option to get up the field with speed, his runs in transition have also been important so Watford can stretch defences to generate promising scenarios on the break.

A key byproduct associated with his movement has been how it draws, occupies or pins markers, which can then open up space for his colleagues to use through their own runs or ball carrying. 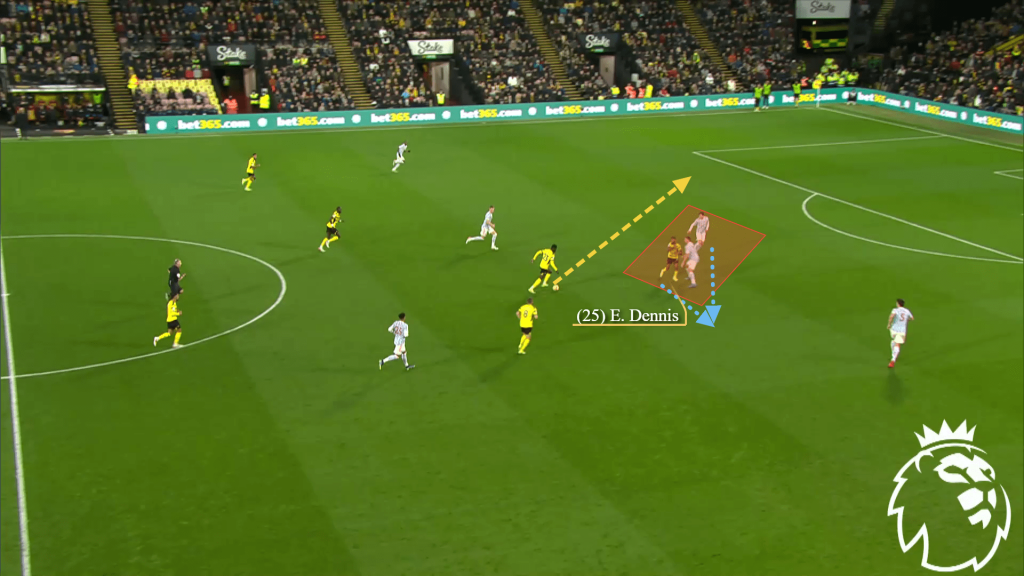 Even though he poses the most danger bursting in behind, the way he uses his underrated heading ability to help his team win second balls or offer a good option in the area, plus drops deeper to link play, have offered extra upside.

A menace on the dribble, where his unique technique, pace and agility ensure he’s an unpredictable customer to contend with, Dennis is a challenging adversary in this regard too.

Good with his first touch and possessing a nice repertoire of moves, including faked shots and passes, shimmies, stepovers, feints and hesitation moves, foes certainly need to be on their toes to handle with him. Strong on the ball and pretty well balanced, it’s been admirable how he protects the ball under pressure and can weave away from danger.

A competent passer to boot, he’s proven how effective he is at creating chances. Laying on five assists so far, Dennis has obliged runners with measured through balls on the ground and in the air, accurate crosses and cutbacks and some nifty layoffs. 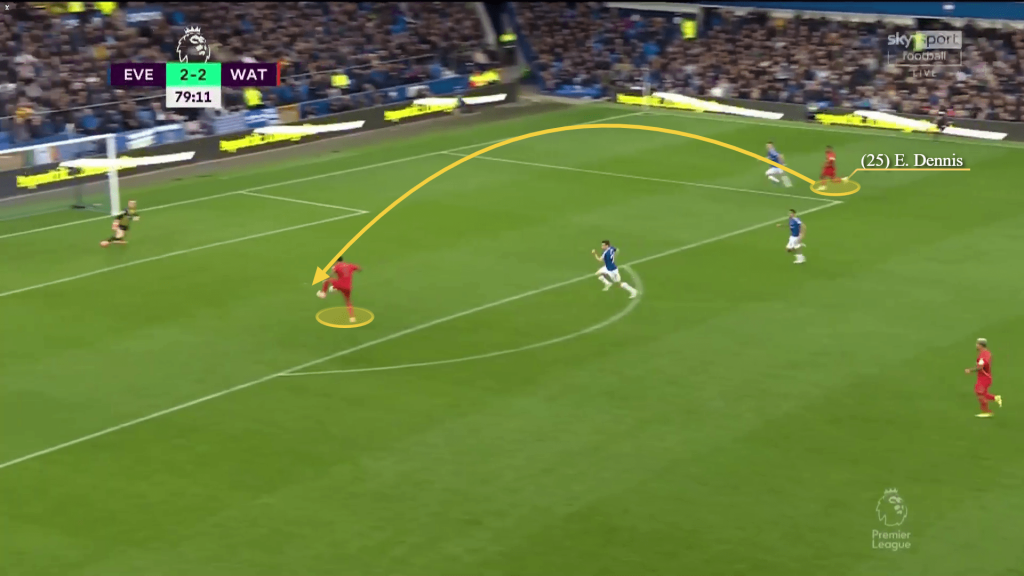 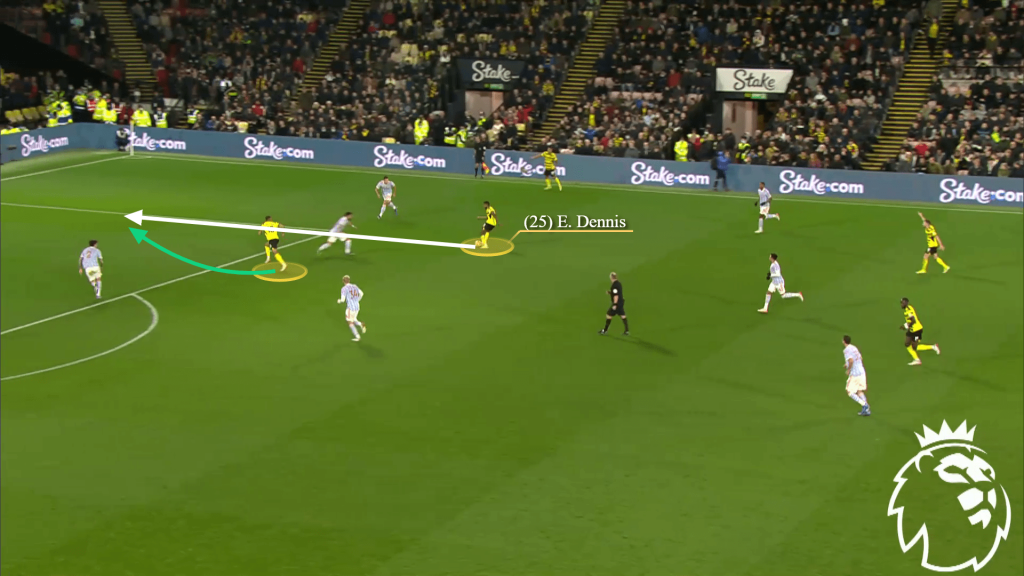 Producing the goods offensively for Watford, there’s no doubting he’s been one of the signings of the season so far. “[Dennis] is a very talented player. He’s fast, has good skill, always runs straight to the goal – I love these kinds of players,” Ranieri told the club’s official website.

Joining for just €4 million from Club Brugge in the summer, the man with plenty of Champions League experience is clearly loving life with the Hornets. “I’m enjoying every bit of being here. From the first day, it’s been love from the players and from everybody, so I’m really happy that I chose to come here, so I’m happy,” he explained.

He then added this on the rigours of the Premier League: “It’s really tough; the intensity is really high. But I’m a very fast player, I love running, so I’m finding it easy, but there are a lot of quality players. Most players want to be in the Premier League. I’m here and happy.”

Adapting outstandingly to what many believe is the best league in the world and having already scored against the likes of Manchester United, Chelsea, Leicester City, Everton and Aston Villa, it’ll be fascinating to keep tracking his progress as the season continues to see if he keeps up his elite level.