Dewsbury-Hall emerges as a key driving force for Leicester 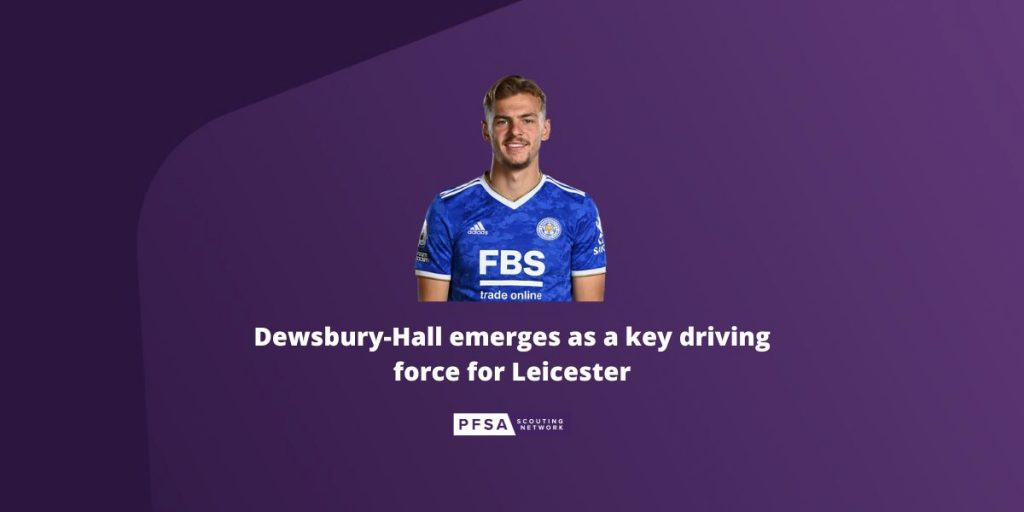 Considering he had never played in the Premier League prior to this season, it’s been quite remarkable watching Kiernan Dewsbury-Hall thrive with Leicester City this campaign.

While he made his league debut off the bench back in August vs. Norwich City and was forced to settle for minutes off the bench and be content with cup action, since making his first PL start vs. Aston Villa back in December, the 23-year-old hasn’t looked back.

Making 24 starts in all competitions thereafter, his rise to prominence has been extremely impressive, with him quickly gaining the belief of his manager. Growing into an integral member of Brendan Rodgers’ squad and slotting brilliantly into midfield, his form has been a highlight both domestically and in Leicester’s UEFA Europa Conference League run. “Since he came into the team he is everything that represents a team of mine,” Rodgers explained.

“He is very honest to the game. He has great industry. He runs, works and presses, and he has quality. He has scored in Europe but we said to him that, as a No 8, his job is to create goals and score goals.

“He’s made a real impact with his honesty and quality. There is no question he has become a very important player for us — his intensity and urgency in the game. I felt we needed a freshness. The likes of him, Youri and Madders, having played the other night, they are very pivotal players for us.

“He’s been relentless, really. You see his hunger and his desire and his quality.”

Such an asset going forward, the classy, polished and efficient Dewsbury-Hall has been a real driving force with the ball at his feet. Very smooth and elegant on the dribble, he weaves away from danger smartly with trademark twists and turns, makes room for himself with tidy shoulder drops and feints and can outfox foes with subtle pieces of skill using his tight ball control.

Quick to process situations and assess his options, it’s been admirable how he protects the ball by altering his receiving posture while waiting for a viable option to arise, with his press resistance seeing the composed midfielder typically make coherent decisions. Ranking in the top 13% for progressive carries (6.15 per 90) and the top 16% for dribbles completed (1.26 p90) among players in his position across Europe’s top five leagues illustrates his menace here.

Full of imagination and quality in his passing too, the 23-year-old’s chance creation prowess has added another dimension to the Foxes’ work going forward. Boasting terrific vision to spot runners and the range of passing to hit his targets, there’s been so much to admire about his output in this aspect.

Capable of splitting open defences with pinpoint through balls on the ground, ideally weighted deliveries over the top, line breaking passes to find teammates between the lines and unlocking backlines with crisp interplay in close, he has a pass for any situation. Moreover, his raking switches of play, enticing crosses and cutbacks (from dead balls and open play) and how he recycles possession if the progressive option isn’t on has amplified his value. 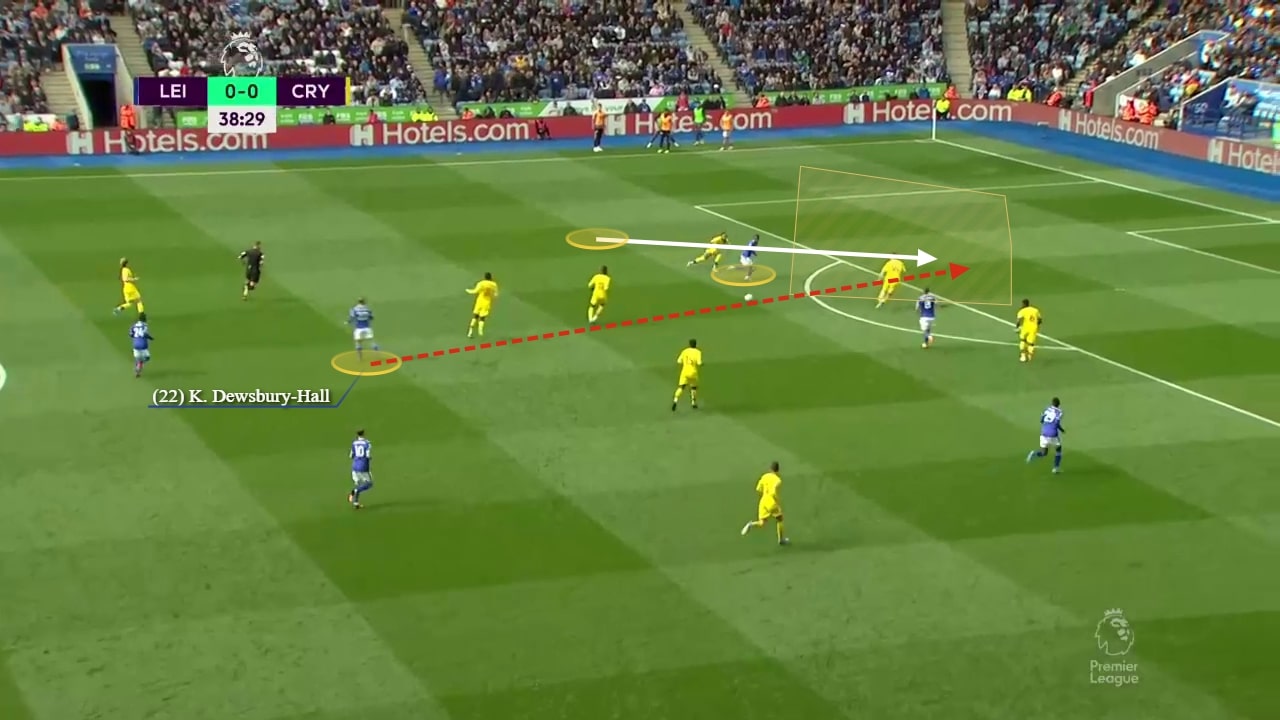 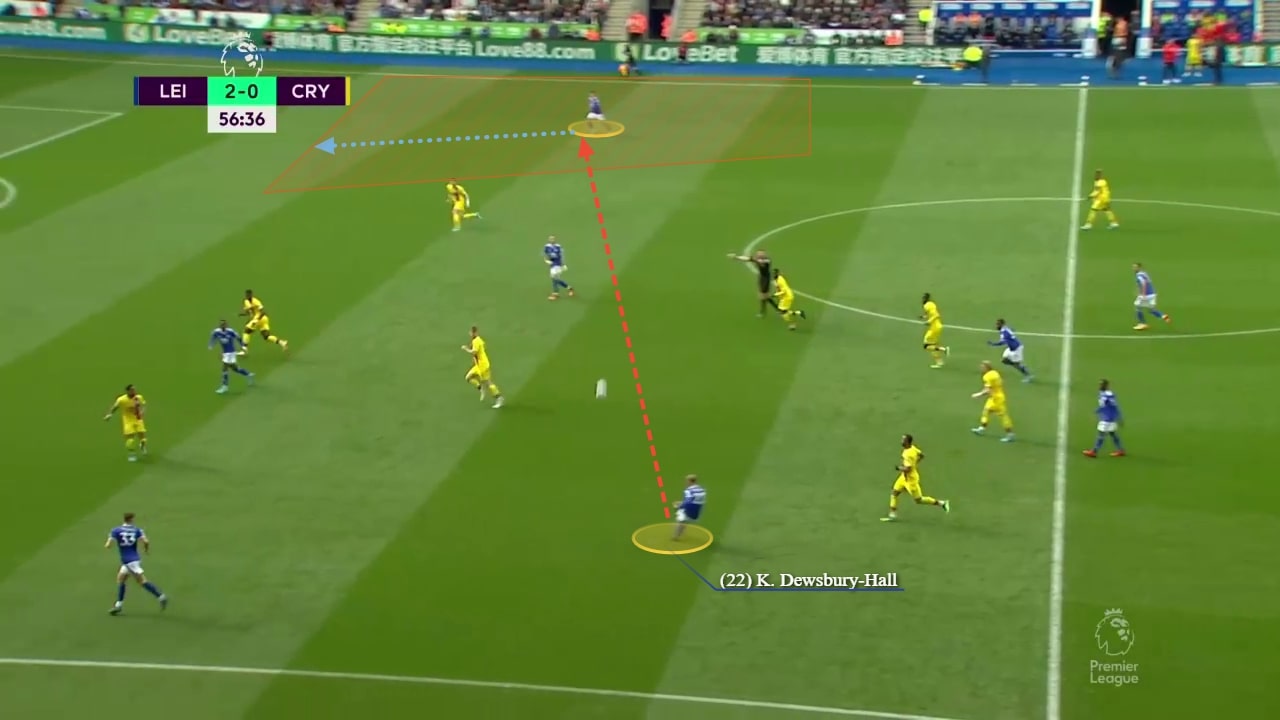 A master at disguising his passes with his eyes and body shape, this notably helps him catch defences off balance to set free teammates.

Also proving he has an eye for goal and isn’t afraid to launch shots on net if in range, the man with a wand of a left foot’s goal against Crystal Palace showcased his scoring threat. Parlaying power and placement, Dewsbury-Hall’s shooting aptitude is highlighted by the numbers that state he ranks in the 23% for shots (1.36 p90), top 26% for non penalty goals (0.10 p90) and top 36% for non penalty expected goals (0.08 p90). 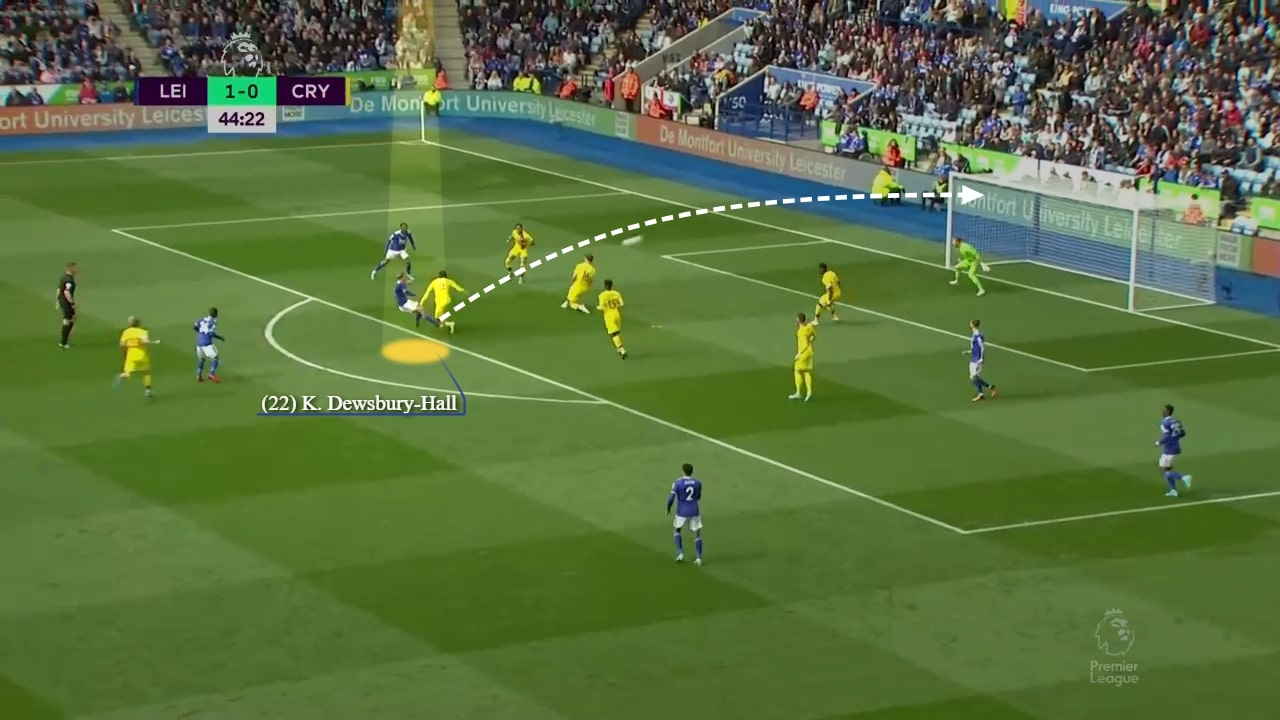 His intelligent movement then brings it all together, for he’s very adept at exploiting spaces all over to help his team have solutions to progress attacks. Forever scanning and roaming the pitch for openings, he’s especially excelled operating between the lines both centrally and when in the half spaces.

Fast thinking and a tireless runner, the way he motors across the turf to provide options has ensured the nearby ball holder typically has support. With defenders often preoccupied by Leicester’s attackers and him a master at dropping off the blindside of midfielders, it’s been very impressive how he evades markers to get into such dangerous positions to wreak havoc. 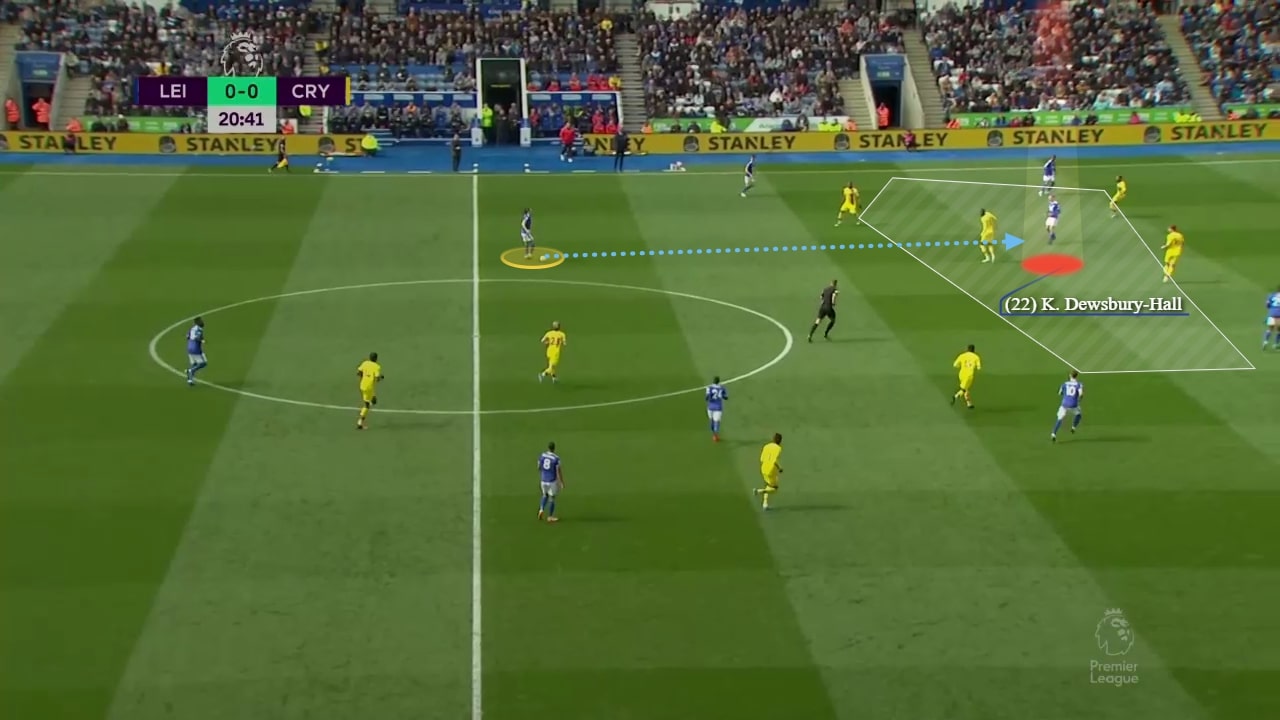 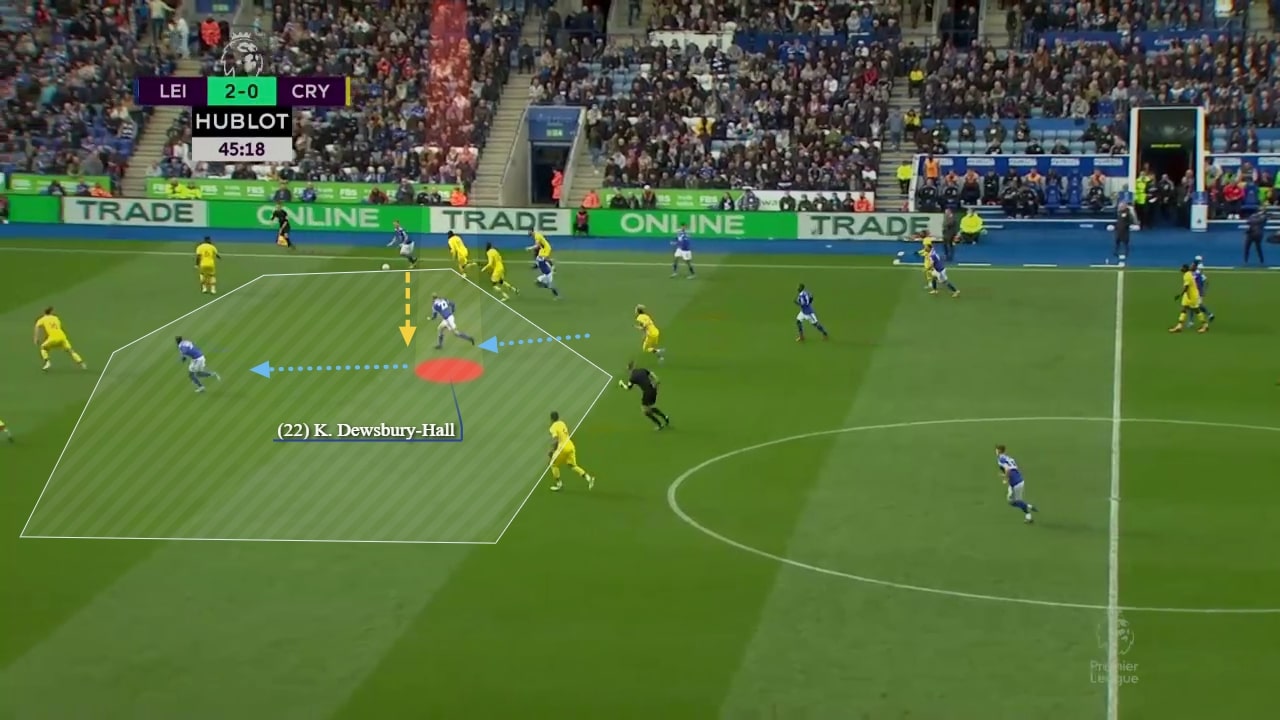 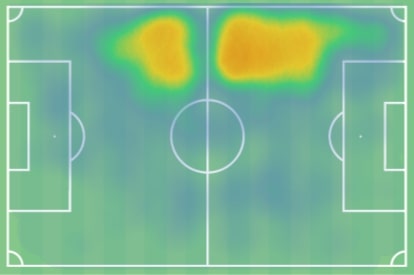 Picking when to form overloads during build up and once control has been established, Dewsbury-Hall does a good job of being the free man or engaging in third man combinations to break the press. 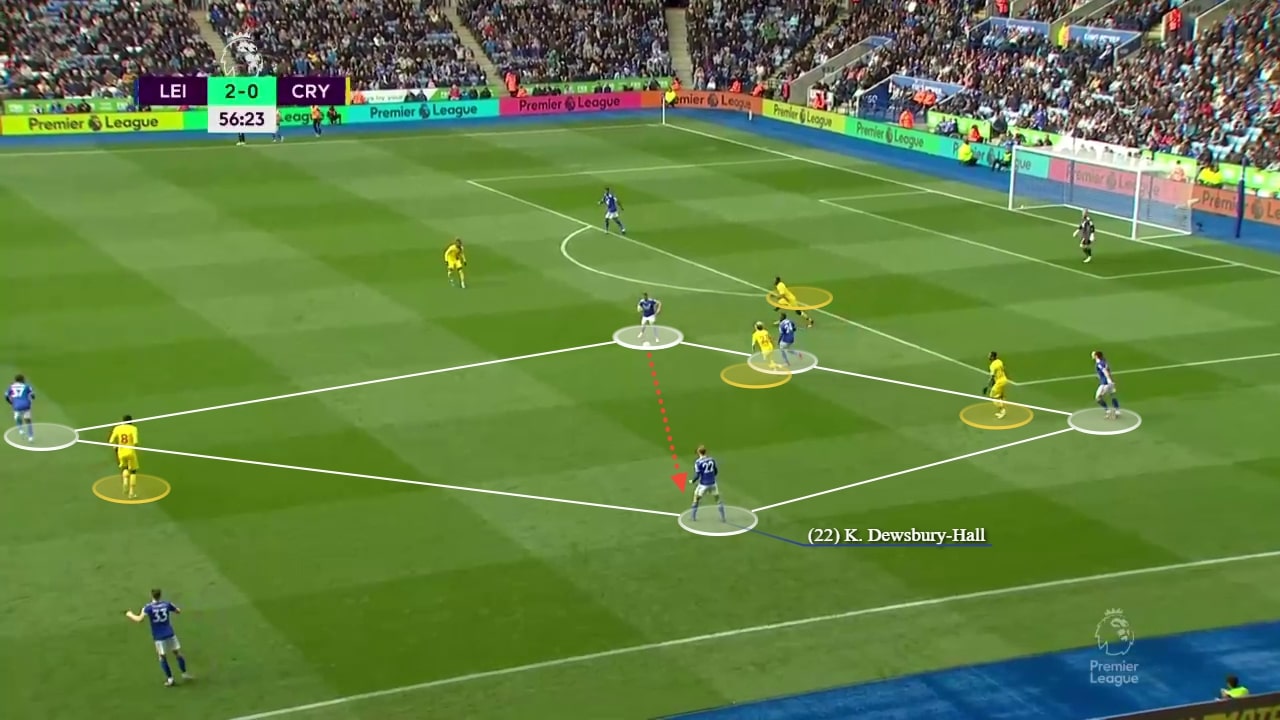 It also warrants mention how he rotates with his fellow midfielders and attackers to add some variety and unpredictability, which destabilises defensive units. On occasion, his interchanges with his nearby fullback have been interesting too, with his drops deep allowing him to receive possession with more time and space to dictate the tempo and ping passes under less pressure. 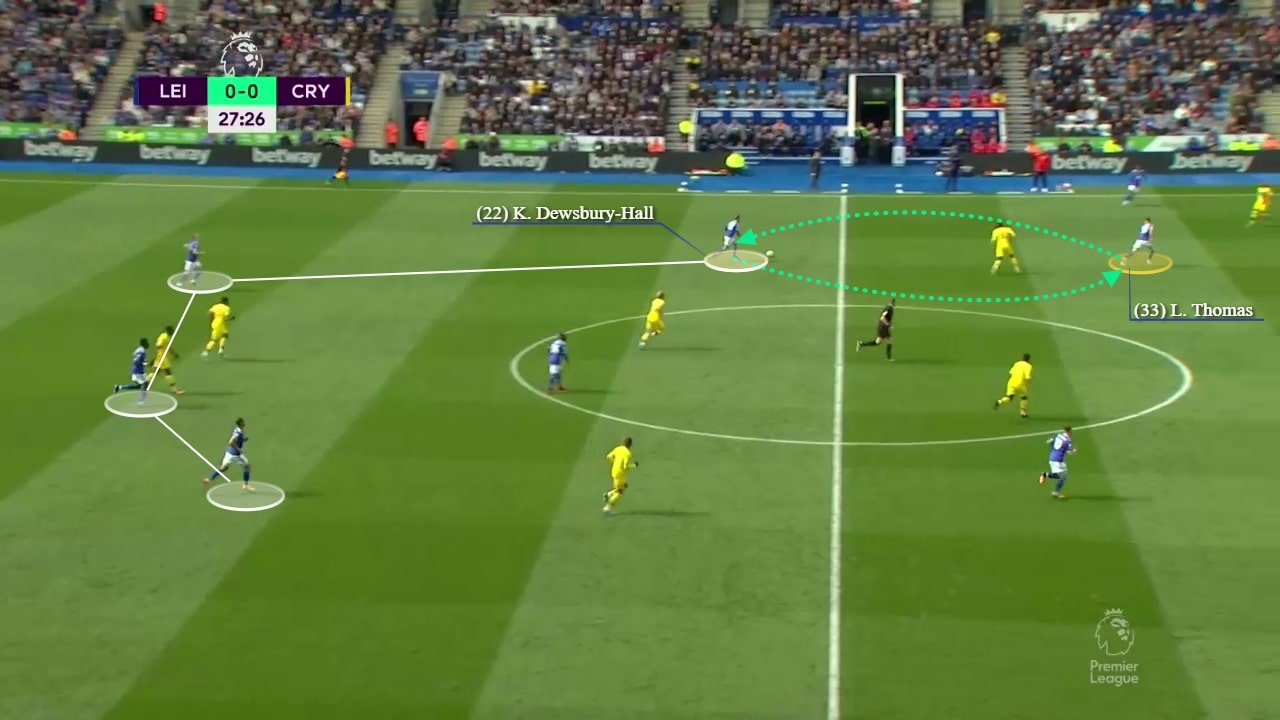 Dewsbury-Hall’s penetrative runs down the channels and into the box from deep have amplified his nuisance. Timing these surges cleverly to attack gaps between defenders, opponents are often powerless to stop him due to them either being preoccupied, too late to track him or because they completely miss him. 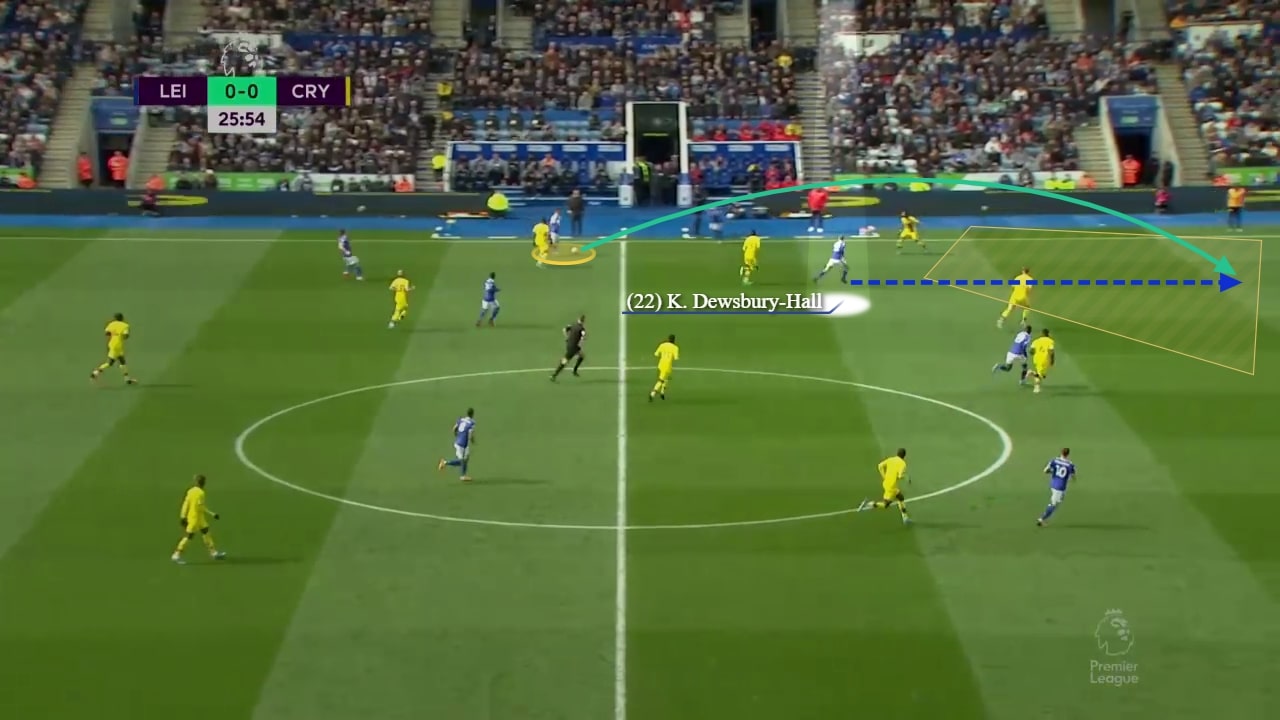 His wonderful goal against Palace owed plenty to one of his astute bursts, with the Eagles unable to deal with his late arriving run. 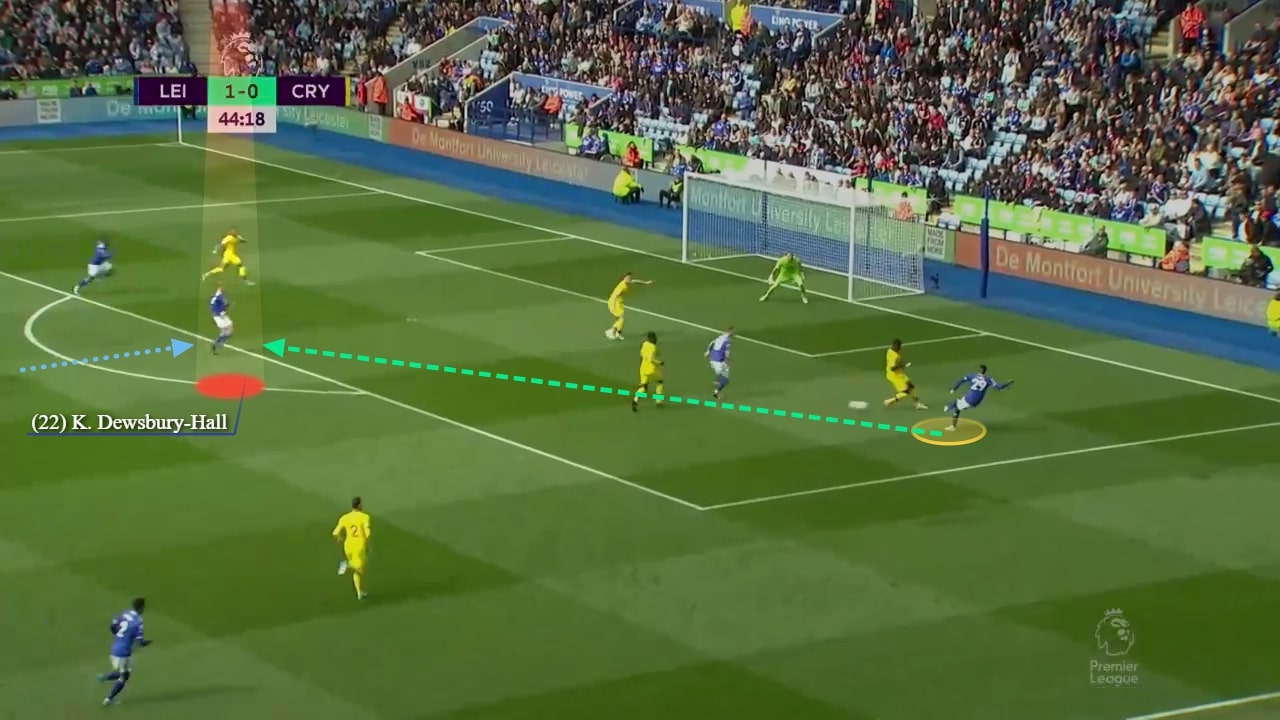 Coalescing slickly with his colleagues and a brilliant space finder individually, it’s little surprise he’s in the top 8% for progressive passes received (4.19 p90).

Meanwhile, there’s no doubting what a vital component he is on the defensive end too, for his energy, intensity and aggression ensure he leads the press and sets the tone for his colleagues to follow.

Harrying foes not just with gusto but also with nous, his angled pressing sees him further compound issues for enemies courtesy of how he uses his cover shadow to block passing lanes behind him. In doing so, opponents are often forced wide and have minimal options to progress through. As a result, this forces low percentage passes, rushed clearances or allows the Englishman to recover the ball while his targets dally on the ball. 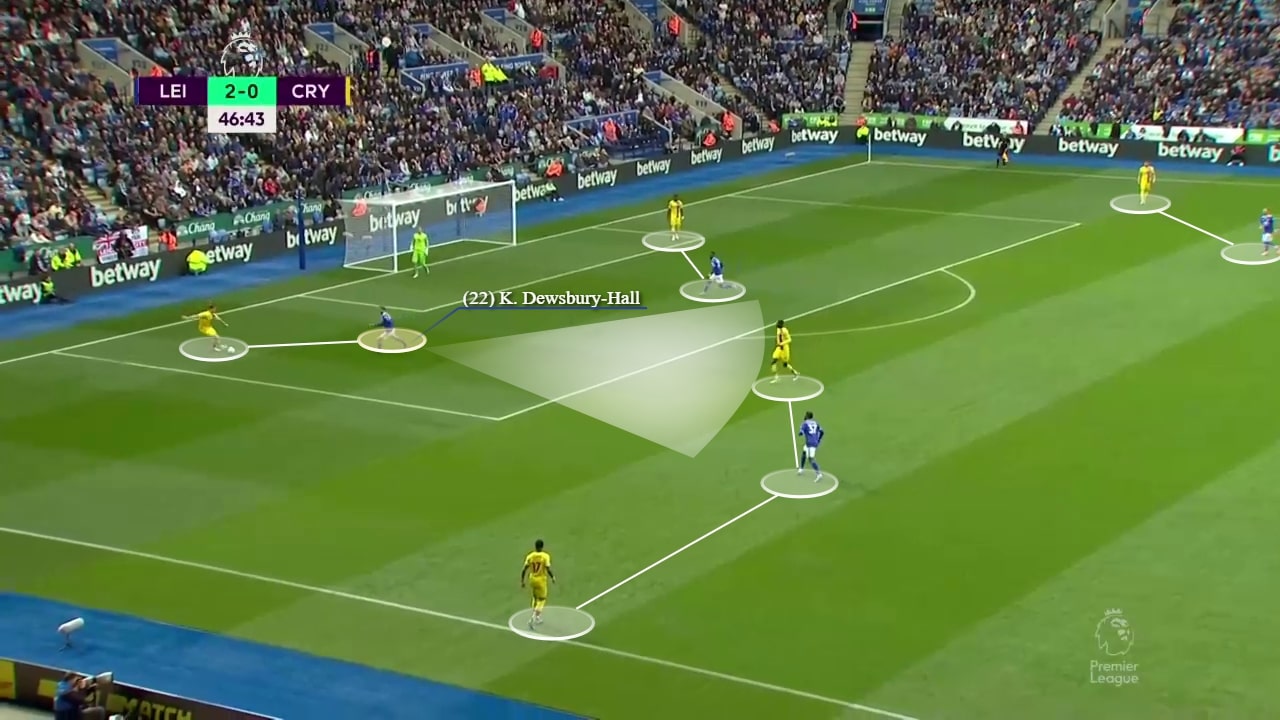 So attentive to triggers such as back passes, passes across goal, when the ball goes wide, underhit passes and when an opponent receives in an open body posture or with their back to goal, this increases his chances of making recoveries.

Right in tune with Rodgers’ demands, it’s been good to see how he holds his pressing both to create traps (gives the opposition a perception a free man is on) and so he has access to multiple opponents while he waits to see where the next pass goes.

Fierce in the tackle, positionally sound and giving his all for the team, the Foxes’ elite ball winner ranks in the top 30% for pressures (20.43 p90).

Relishing his incredible run in the first team and riding the crest of a wave, the emergence of Dewsbury-Hall has unquestionably been one of the highlights of Leicester’s campaign. “I’ll probably reflect at the end of the season. Now, games are coming thick and fast. I can’t really afford to sit back and look. I’ve got to be focused and recover, and be ready for each game,” he said.

“We’re coming to a very important part of the season and everyone knows that. I feel like we’re in a good place at the moment, we’ve got a lot of the squad back and we can really kick on and have a great end to the season. I’m just happy to be playing and doing as well as I can for the team, then come the end of the season, I’ll see where I’m at.”

While the man who joined the Foxes at the age of eight is focused on finishing the term in style, much talk has suggested he’s ready for an England call up and should one day become club captain, which serves as a testament to his consistent excellence.

Determined, relentless and always striving to improve, watching how he continues his progression will be intriguing, for he has all the tools to thrive in the modern game.

Despite him blossoming later than many and his path to the top being slightly unconventional, it’s been fantastic to see him finally being rewarded for all his hard work, patience and persistence.