Dalsgaard a crucial piece of Frank’s plans at Brentford 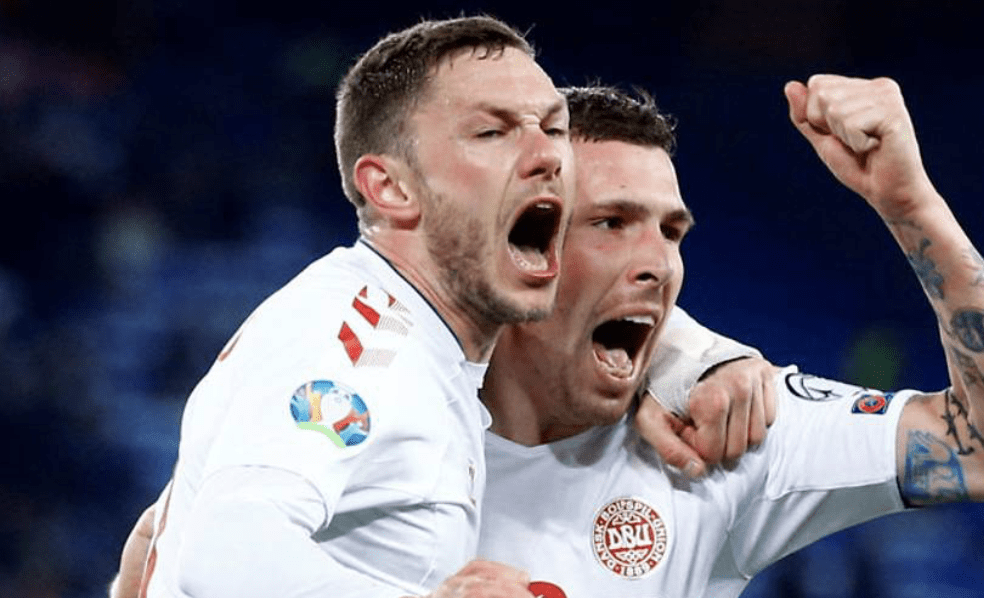 Now into his third year at Brentford, Henrik Dalsgaard’s contribution on both sides of the ball has ensured he’s operating at a very high level for promotion-chasing Brentford.

Performing with quality and consistency, the Danish international recently spoke about how happy he is at the ambitious club and how he’s enjoying his best run of form in his career. “Right now I’m just playing really good football,” he told Bold.dk

“I’m part of the offensive and defensive game. I’ve gotten better at reading the game, so I also help lead my teammates in terms of people taking up the right positions. I have a good level of intensity in the matches and my body is doing really well, which is very important. So yes, this is probably the best period of my career, also because the level is higher than in Belgium.”

With the plan being to help propel the Bees into the Premier League, Dalsgaard’s been a key cog in Thomas Frank’s men winning five of their last six matches, as they currently occupy eighth on the table, touching distance away from the playoff places.

A real weapon on the attacking end, the Danish international poses a regular threat towards the Bees’ offensive efforts. To kick things off with his movement, he loves getting forward at every available opportunity. Embarking on his runs sharply to effectively stretch opposition rearguards horizontally and vertically with his high and wide positioning, this subsequently causes a disconnect in opposing backlines while ensuring he can receive in time and space. Moreover, not only does this allow him to stretch defences but also to receive in isolation scenarios to be an outlet for switches. 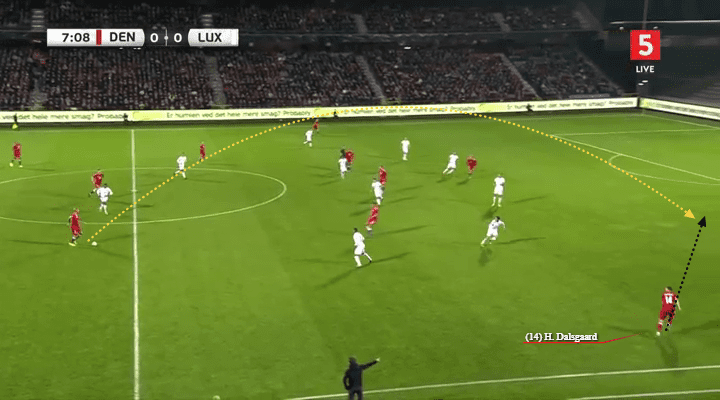 Dalsgaard’s complimentary movement with his teammates is extremely beneficial for his team too. Using opposite movements, where a colleague will drop deep and he’ll push on, some neat rotations, third man runs and crafty blindside runs, this has only added to his worth. 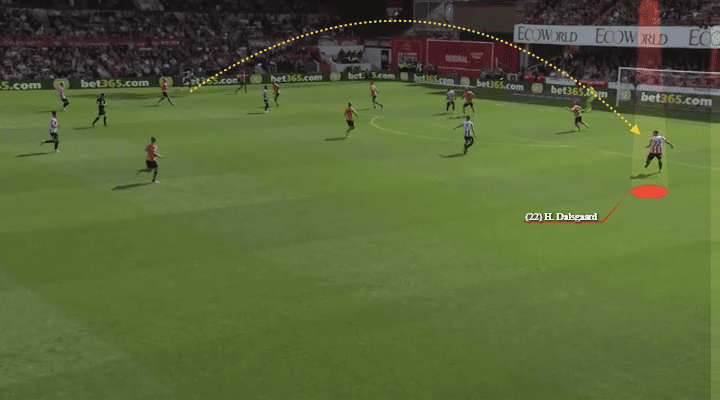 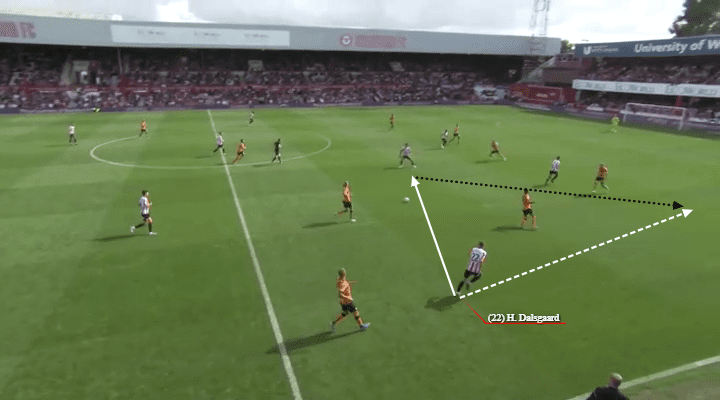 Placing defences under pressure with his threat, which also sees him make sharp diagonal runs into the box to be an option for crosses into the box from the opposite flank, his movement’s been a real highlight. 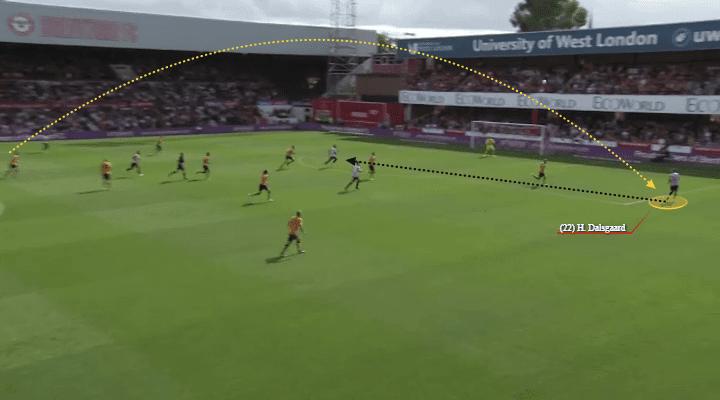 In slower, more patient build-up, the way he’s generated some handy overloads to help his team progress by forming 4v3 and 3v2 superiorities out wide has been key too.

Once the ball is at his feet, there’s been much to like about how he carries the ball upfield and uses his distribution to connect, orchestrate and create chances for his team. A competent dribbler and crosser, he relishes driving upfield before generating room for himself to fire in some sharp crosses and cutbacks into the box. Able to pinpoint runners at the back post, edge of the box, inside the box and at the near post, his variety has been a bonus. 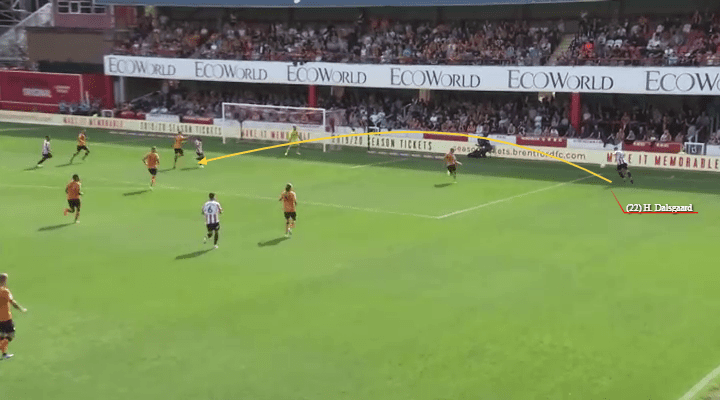 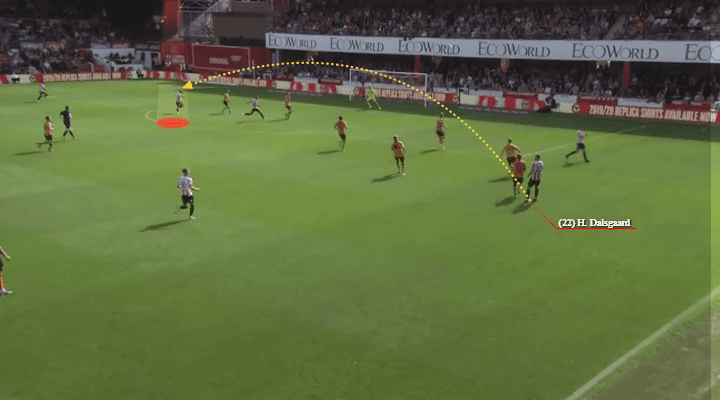 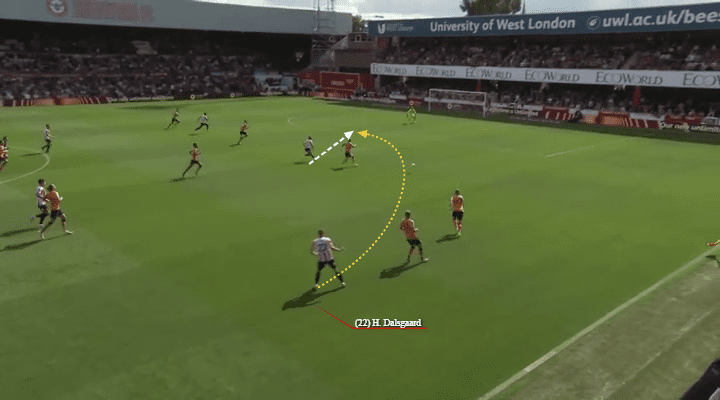 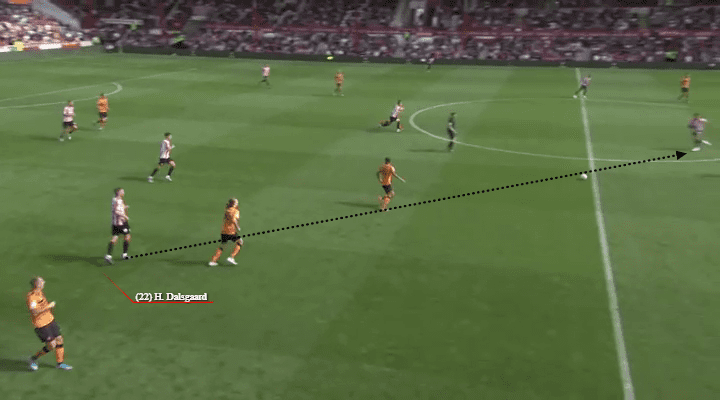 Tucking into his defensive duties with dedication, Dalsgaard tracks runners diligently whether they drop deep or look to get in behind. Intent on getting touch tight so his man struggles to enjoy an easy touch or turn him, his proactivity is key towards his success. Possessing good judgement when applying his interceptions, which is aided by his long legs to reach out and nip in, the imposing right sided defender is certainly a tough man to get the better of.

Good in a wide array of situations, the experienced 30-year-old’s producing the goods on both ends, with his nous and leadership also proving vital for Brentford.

While he might not be the most eye-catching operator at Brentford, there’s no doubting what an important contributor he is, with his consistency, reliability and how he performs his role brilliantly seeing him serve as a vital cog in compatriot Frank’s wheel.