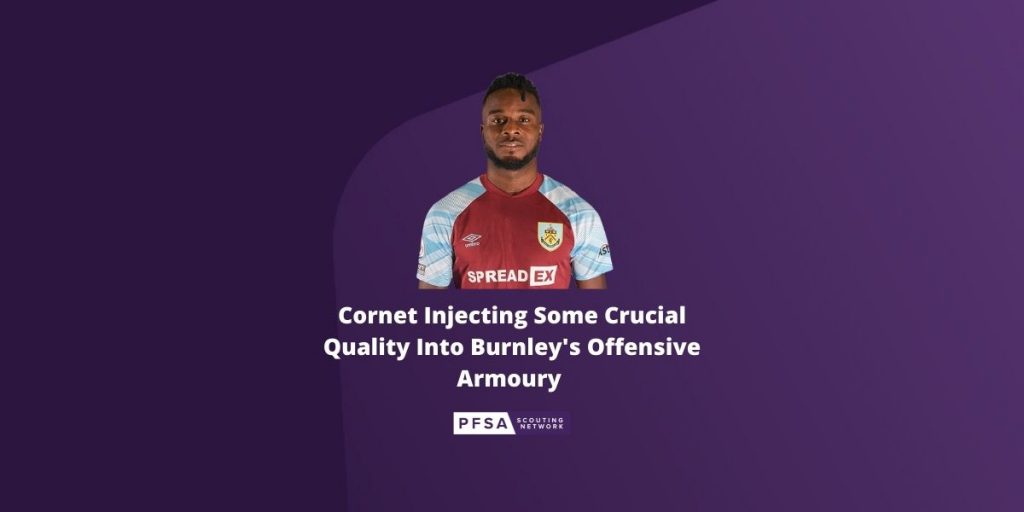 Bagging four goals already for Burnley in just 368 minutes of league action, Maxwel Cornet’s impact for Burnley has been nothing short of spectacular.

Vindicating emphatically Burnley’s decision to splash the cash on the Ivorian who cost £12.9 million from Olympique Lyon in the summer, he’s been one of the signings of the season so far.

Injecting some much-needed quality, creativity and ingenuity into the Clarets’ efforts in the final third, he’s given them just the spark they needed.

Announcing himself to the fans with a smashing volley vs. Leicester City, he then backed that up by scoring a classy brace against Southampton and grabbing another in Burnley’s tremendous win over Brentford. 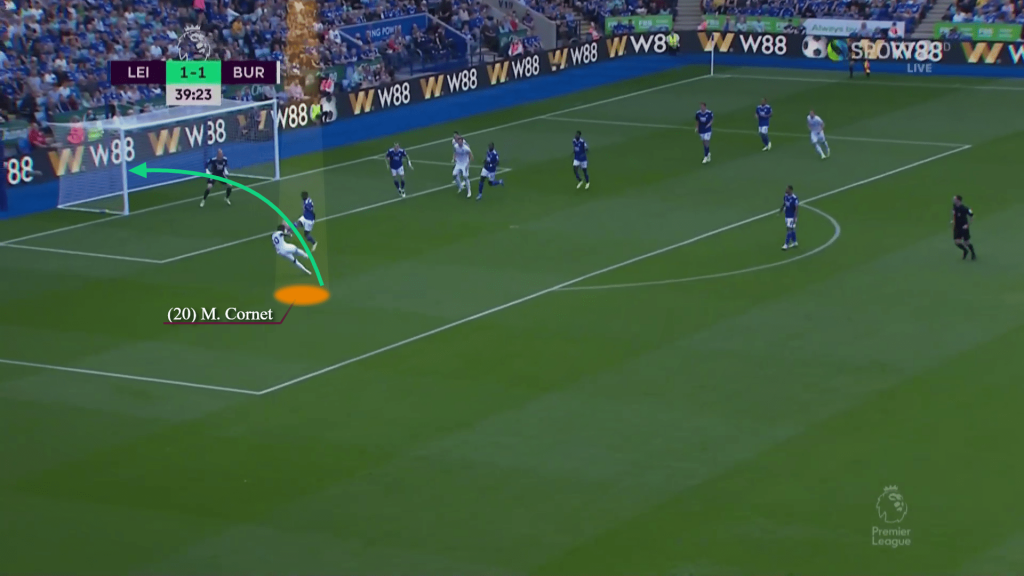 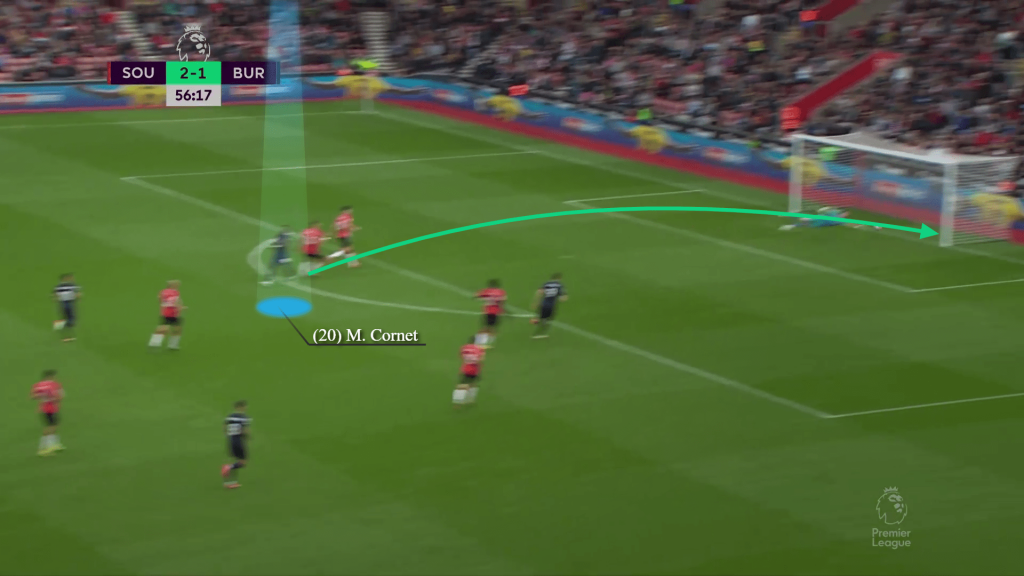 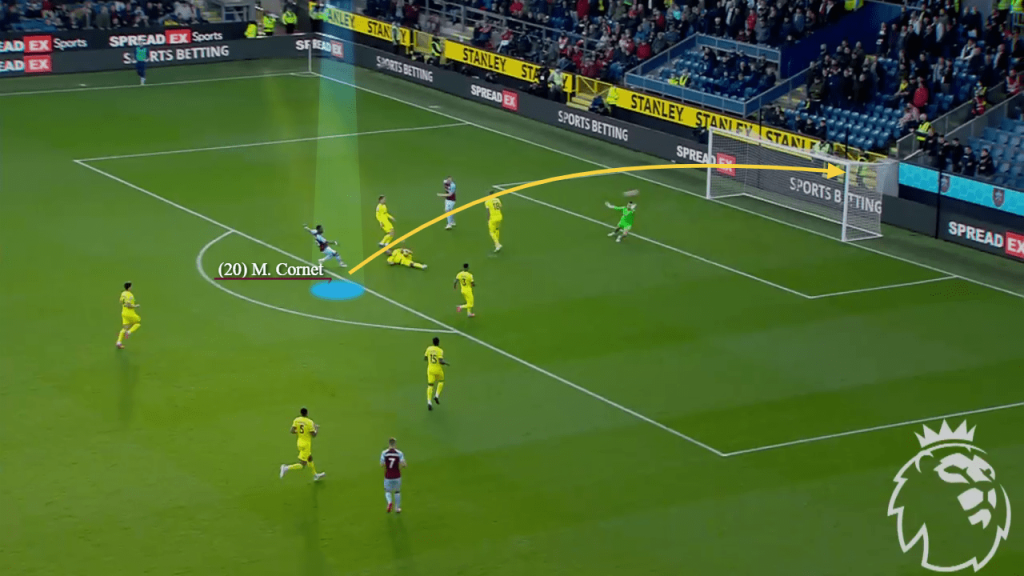 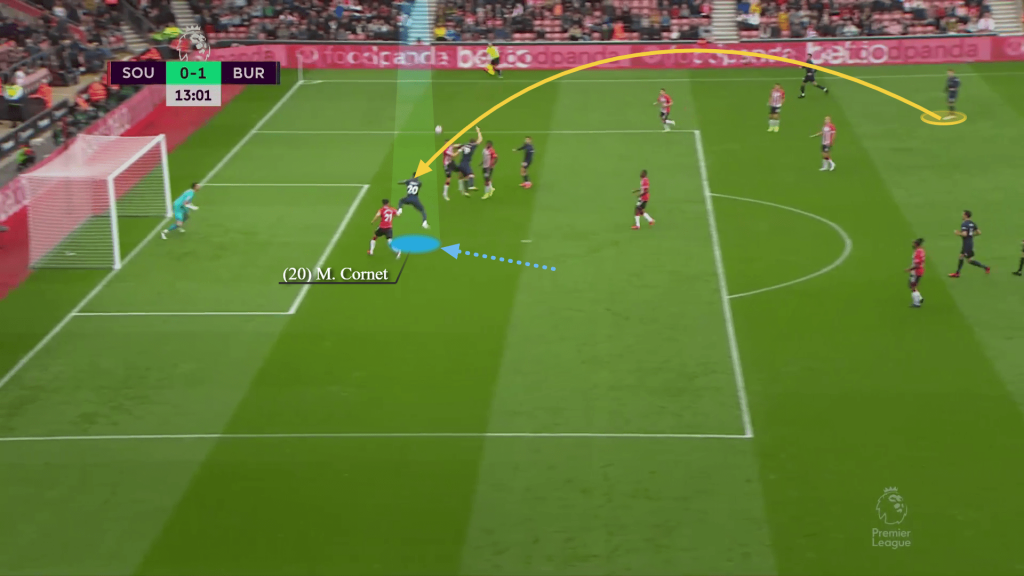 Teammate Chris Wood spoke glowingly on the impact the Frenchman’s had at Turf Moor. “He is lively, he is fresh, has exuberance that we probably needed at this club and has hit the ground running,” he said.

“He’s a fantastic player, sharp in training, showing it on the pitch, scoring goals, doing excellent for the team and ultimately he is a very nice lad and that is why he is fitted in so well with the group.”

A wizard in possession, Cornet’s control and first touch provide him with a sound foundation to be such a threat. Full of intent to drive at opponents or into open space, his pace, agility and skills ensure he not only outfoxes opponents but also gains territory rapidly.

Confident and calm on the ball, it’s been impressive how he can weave out of tight spaces, spin his marker or hold up the ball, where his low centre of gravity and explosiveness help him evade markers or maintain possession. Upon parlaying how he can beat opponents with nifty feints, stop gos, shoulder drops, stepovers, faked shots and changes in pace adds to his value.

His strength on the ball warrants mention too, allowing him to ride challenges while keeping balanced or win fouls in advanced areas due to adversaries having to aggressively challenge him in an attempt to stop him.

As a result of his ball carrying, opponents regularly commit multiple markers to him, which crucially generates a free man and causes the opposition’s defensive shape to be compromised. 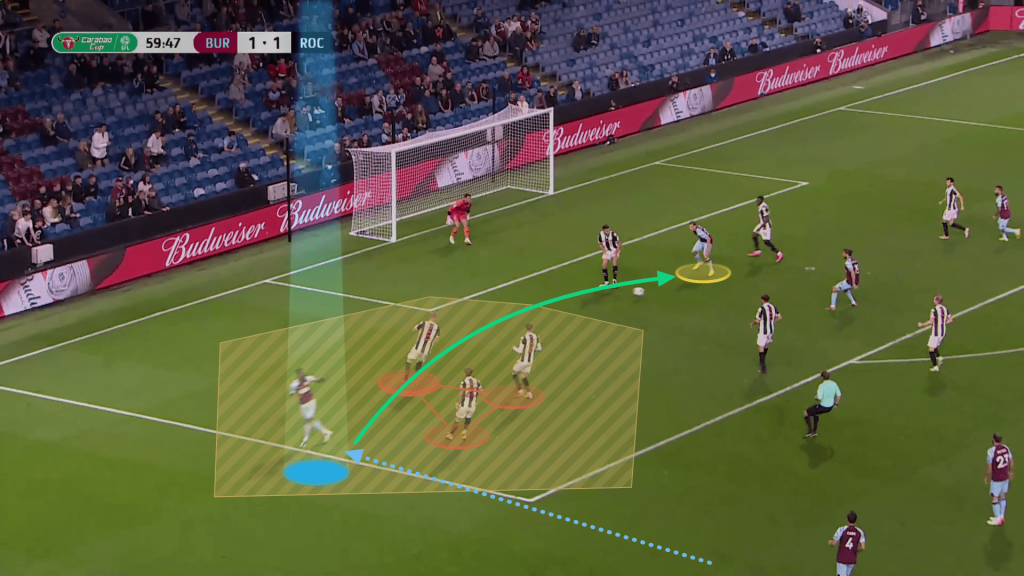 Although Burnley aren’t a team who enjoy much possession, thus meaning Cornet averages just 13.30 passes per 90, it’s been notable how he’s still impacted proceedings with his passing. Aside from combining quickly in close quarters and moving the ball quickly, it’s been good to see him setup openings via his incisive through balls, ground cutbacks and crosses into the box.

An extremely handy set piece taker to boot, this phase of his game has amplified his worth, with his inswinging deliveries and capacity to get nice shape and power on his crosses proving particularly dangerous. 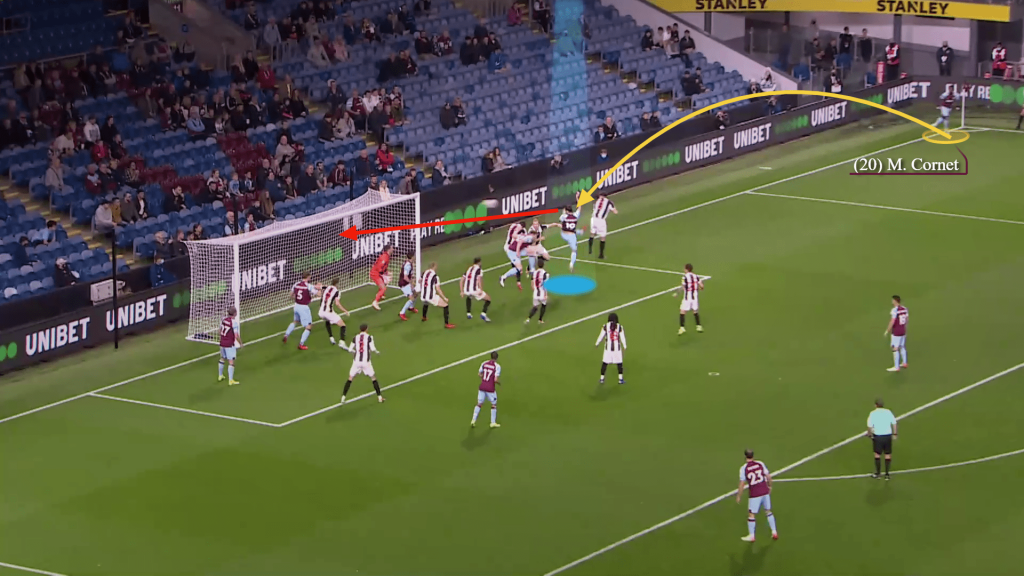 Hardly needing any touches to turn a game, his finishing so far has been remarkable for Burnley so far, with him getting his four goals from just nine shots. Scoring some exceptional strikes as mentioned earlier, his production has been so vital for Burnley, and could be something that might ultimately be the difference between relegation and safety. 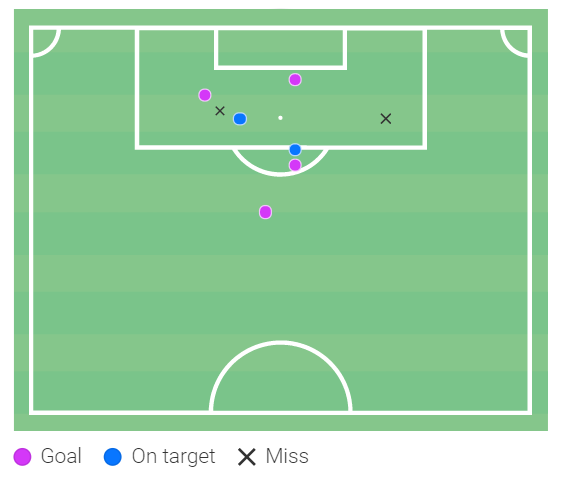 Another of the keys of his success has been his smart movement that’s seen him occupy terrific positions to find space all over the final third.

A major danger with his marauding, smartly timed runs in behind, these have been so valuable. Intelligently angling and curving his runs, this has helped him get the jump on defenders so he can firstly get goal side of his man before latching onto through passes or balls into the area.

Being so expert with his out-to-in runs, Cornet exploits the blindside of markers and gaps between defenders so he can then receive passes in more central locations, which are far more conducive for scoring. Gaining separation from markers nicely so he can’t be impeded initially, once on his bike he’s a tough man to stop. 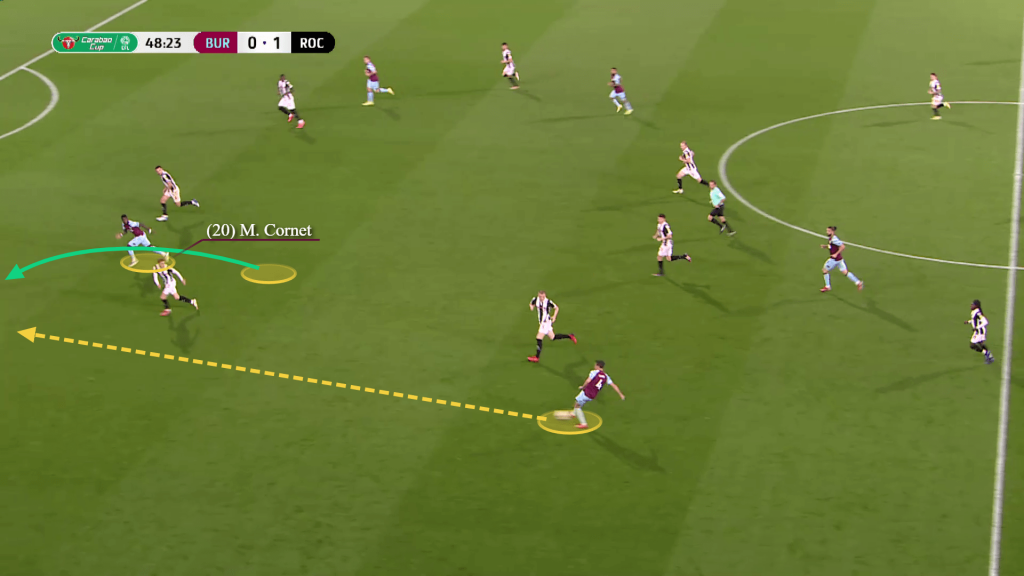 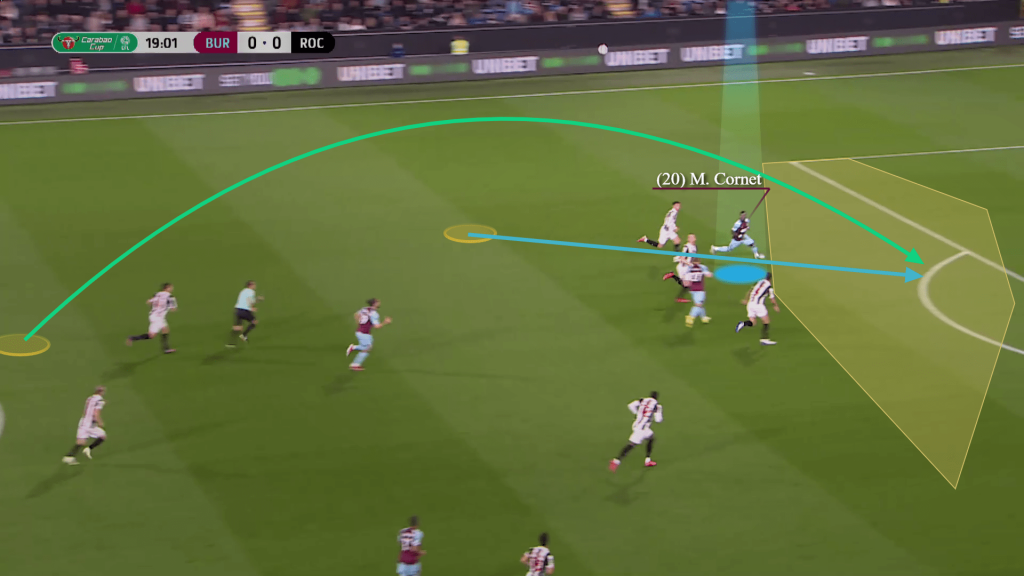 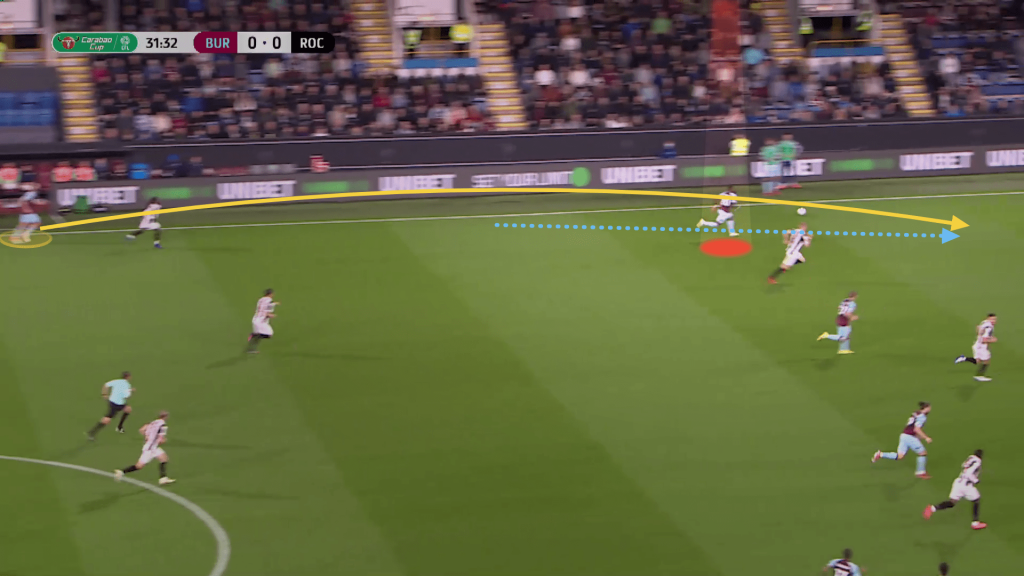 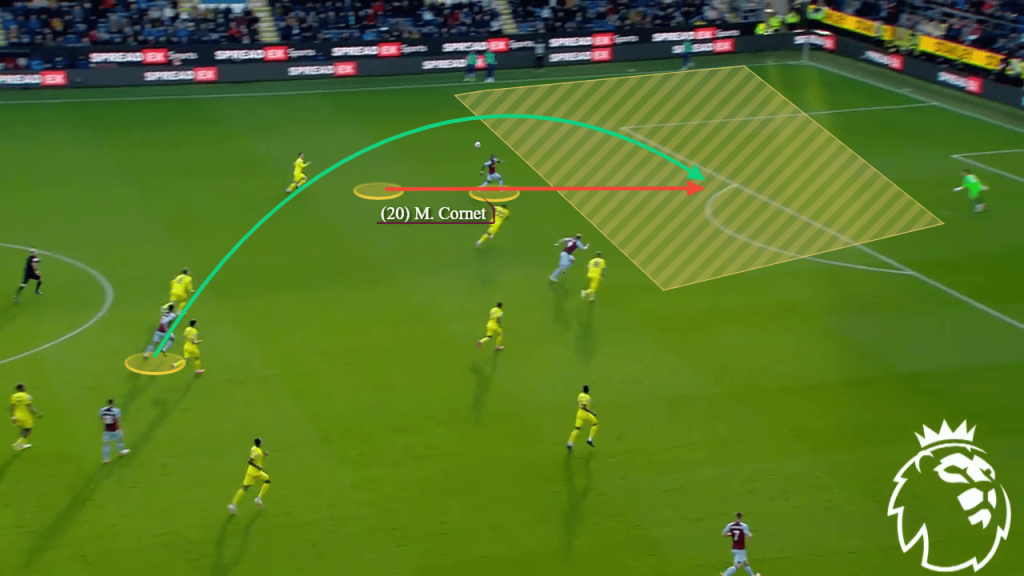 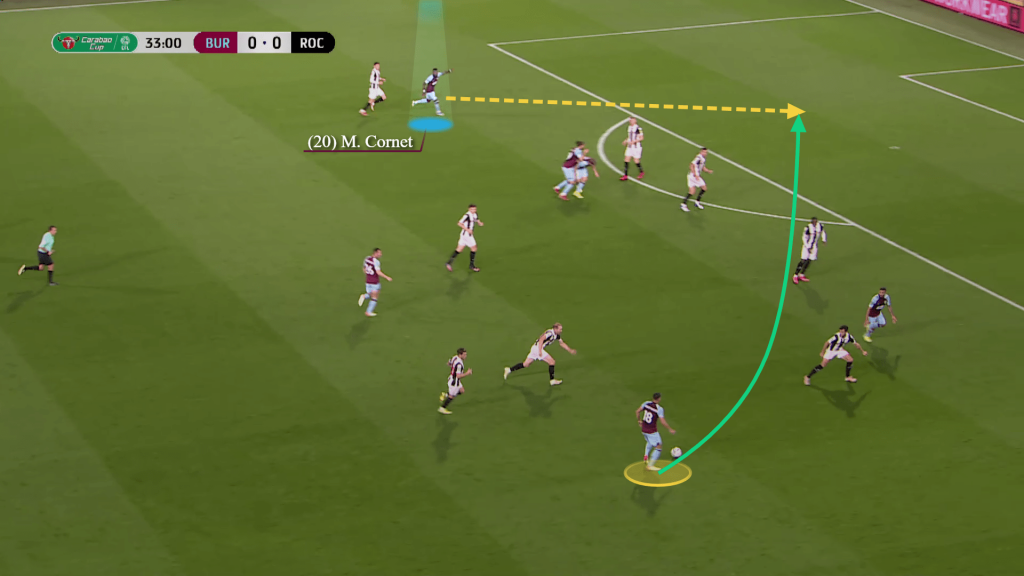 Reading the play well and picking his moments to go, he waits till his teammate can spot him and when the ball is on their preferred foot to enhance the chance of him being found.

Blessed with searing speed, this has certainly been a key string to his bow, with him using this to his advantage especially in counter attacking sequences and when playing against teams that play a high line.

His awareness has transferred into his movement into the box, where he’s targeted spaces between markers, peeled off his man cleverly as they get caught out, dragged deeper or are ball watching and known when to attack the front or near post.

Some extra reasons for upside have arisen from the way he’a found space between the lines, has rotated positions smoothly and that he’s comfortable operating wide and centrally (even though he’s at his best in wide areas). 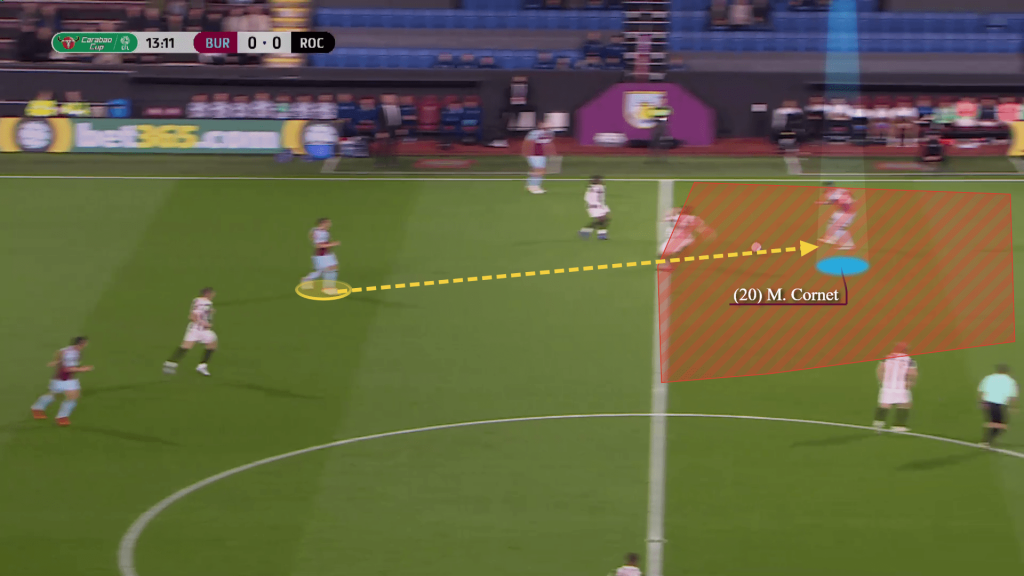 Despite it being early days in his Burnley career, Cornet’s fast start to life and game changing skill set has seen him quickly develop into a fan favourite. Considering Sean Dyche’s men have often lacked inspiration and a touch of class in the final third, it’s understandable why the fans are relishing watching a player of his ilk.

Mentioning how happy he and his family are already at Burnley and how the supporters have made him feel so welcome, his move has ticked all the boxes for both parties so far.

With him set to keep improving his output as he further adjusts to life at his new club, Cornet’s been the perfect acquisition for Burnley. And one that ultimately could swing their hopes of avoiding relegation in their favour to ensure them of yet another season of top flight football.