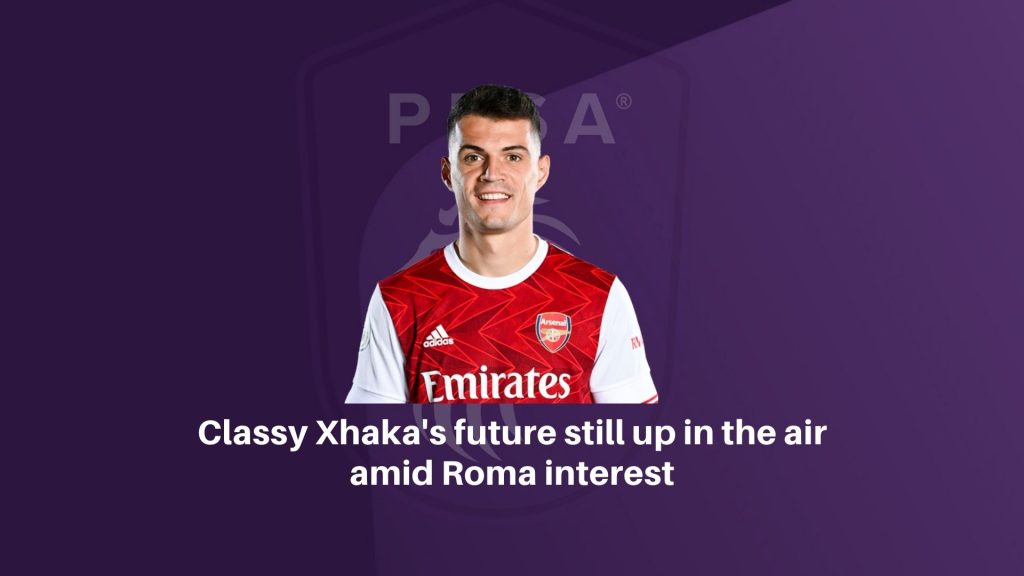 AS Roma appeared destined to have locked in another key signing of Jose Mourinho’s tenure by snapping up Granit Xhaka from Arsenal, but differing opinions on the transfer fee has put the deal in doubt.

Possessing many years of experience at the highest level both at club level and internationally for Switzerland, he’d bring plenty of quality to Roma’s midfield ranks.

Playing with authority, commitment and leadership, these aspects will have further endeared the former Arsenal captain and current Swiss skipper to Mourinho, who loves players with character, grit and a strong mentality. “He’s a natural leader,” asserted Arsenal boss Mikel Arteta.

“He’s someone who is always 1,000 per cent committed, not just for himself but to help all his teammates all the time.”

A player who divided opinion at the Gunners and who is often underappreciated by some sections of the fanbase, joining the Giallorossi would offer the 28-year-old a fresh start although there’s a distinct possibility he’ll remain in North London.

Still in the prime of his career and with many good years left, he’d be raring to go to be an integral component of Mourinho’s plans. Having worked under so many different managers including Lucien Favre, Arsene Wenger, Unai Emery, Arteta and Vladimir Petkovic, he’d have little issue adapting to whatever role he’s given. Proving he’s adaptable and capable of playing in different positions in a variety of systems, his tactical understanding would hold him in good stead to hit the ground running.

Due to his masterful passing range and execution, he’s a huge asset when building out from the back, for his vision and awareness ensure he can pick out passes all over the pitch. Whether over short, long or medium distances, he has a pass to match any situation to go over the press or cut through it.

Blessed with a wand of a left foot, his progressive passing and ability to playmake from deep would offer Roma with a sound foundation to help overcome the press to move up the field. In addition, his aptitude in this regard would help in terms of control and dictating the tempo in midfield.

Able to take multiple defenders out of the equation with a single pass, Xhaka’s penetrative line breaking passing is a highlight. Weighting his passes ideally to pierce opposition structures while still being controllable for his targets has also been a key of his success. 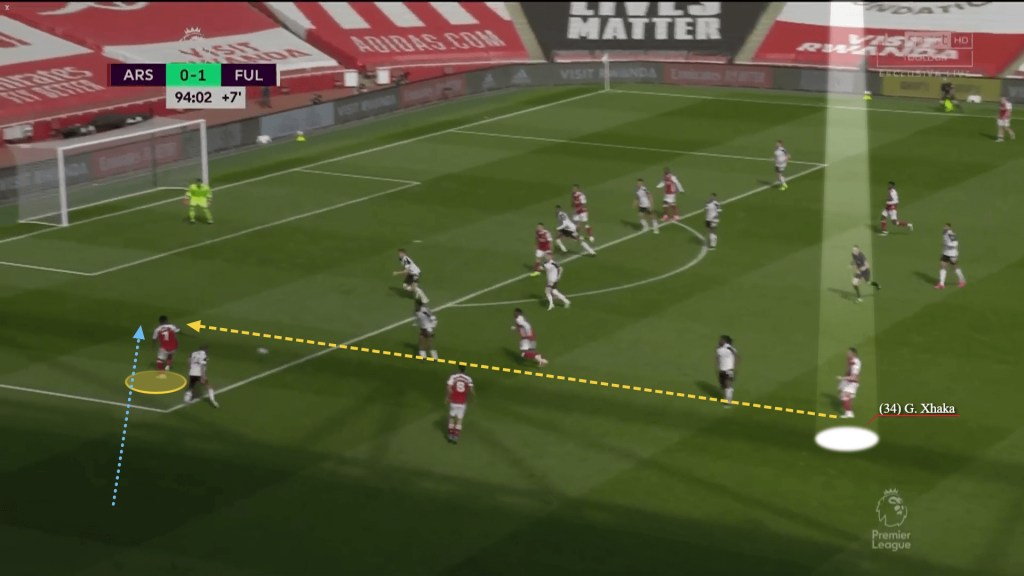 In terms of his long-range distribution, the way he can fire raking diagonal switches to isolate wingers or fullbacks, launch pinpoint through balls in behind and hit measured balls for runners down the channels amplifies his worth. The benefit of his wicked ball-striking technique notably extends to set pieces, clearing danger and when he’s unleashing shots from range. 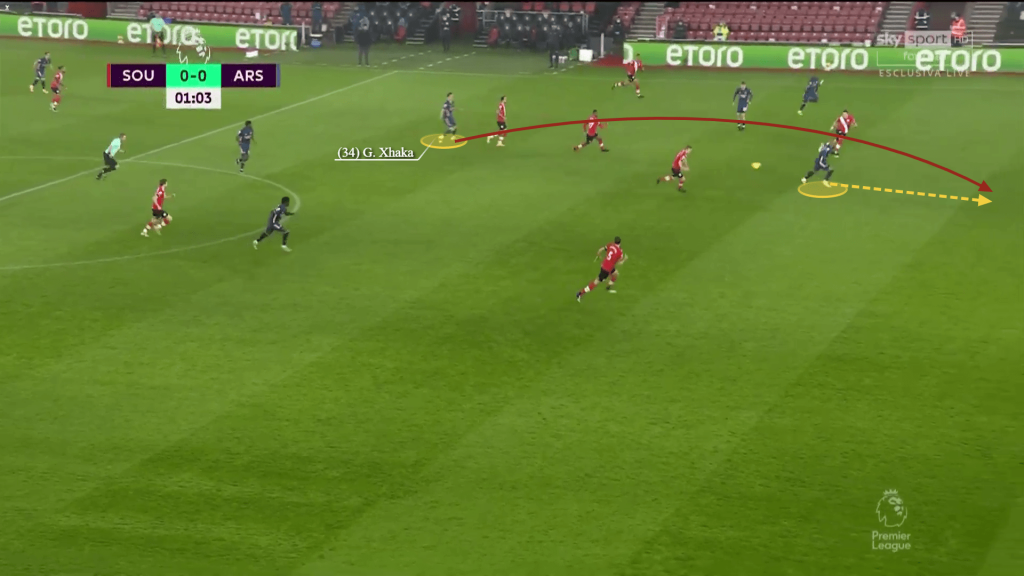 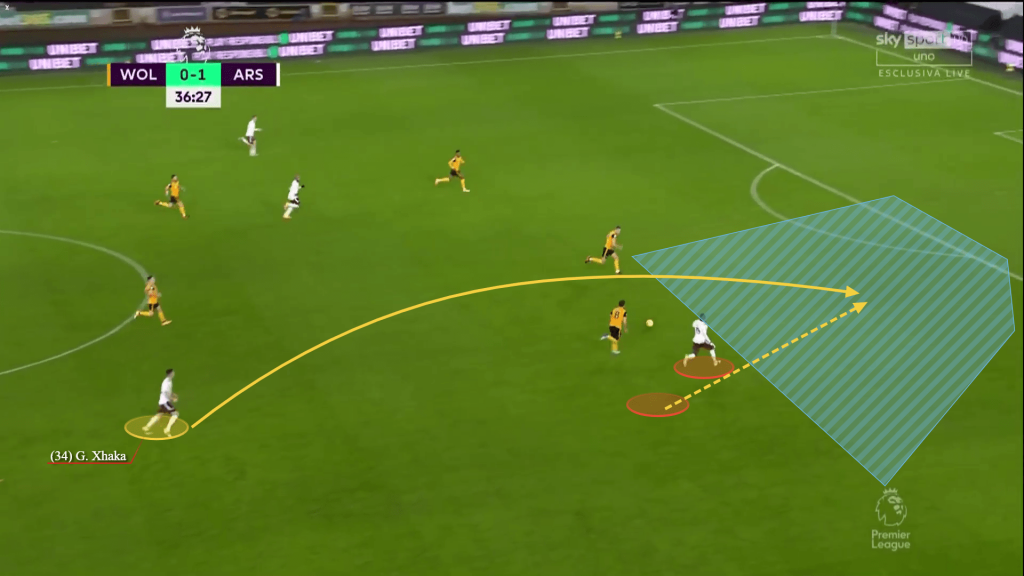 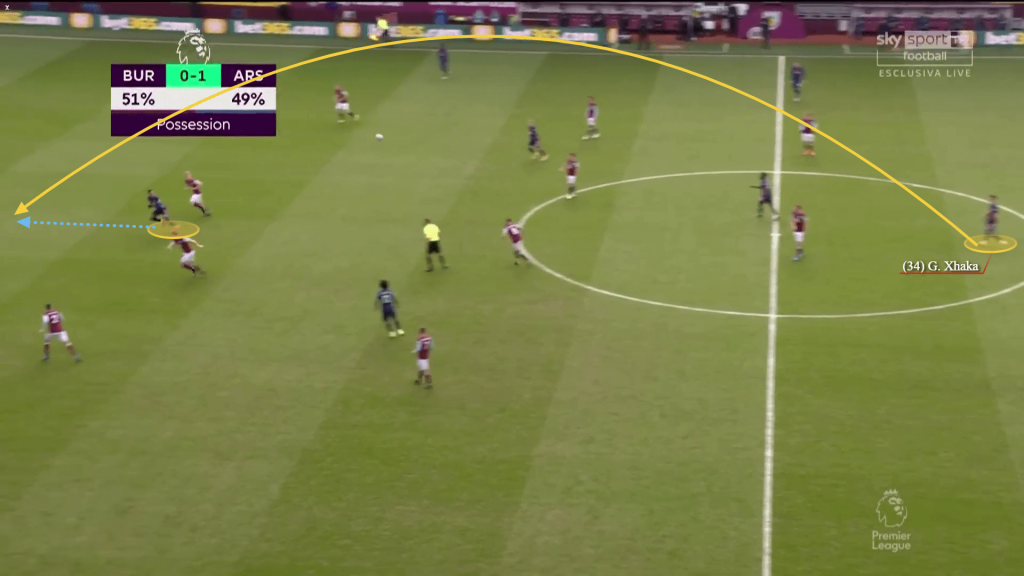 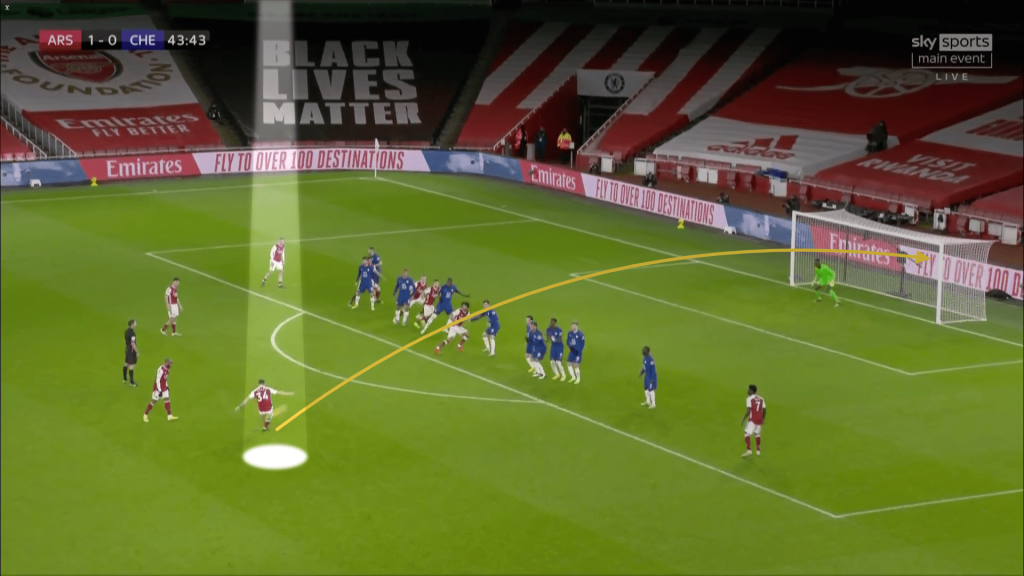 So adept at altering the trajectory and angle of his passes depending on the situation, this certainly adds to his worth, ensuring he can find teammates while avoiding defenders.

Over shorter distances, his ability to combine neatly with teammates in close quarters and quickly recirculate possession while waiting for a weakness in the shape of the opposition are important strings to his bow.

While he’s competent operating in central midfield as an eight or a six as part of a double pivot, he’s shone especially brightly dropping in as a left sided centre back, where he’s afforded plenty of time and space to use his exceptional passing ability to initiate dangerous passages.

From this post in the half spaces, he can enjoy a view of the whole field, which, in combination with his passing prowess, allows him to calmly assess his options before picking out a colleague. Moreover, by pushing back to form a back three, this has allowed Arsenal to gain numerical superiority to make passing out from the back a smoother process. 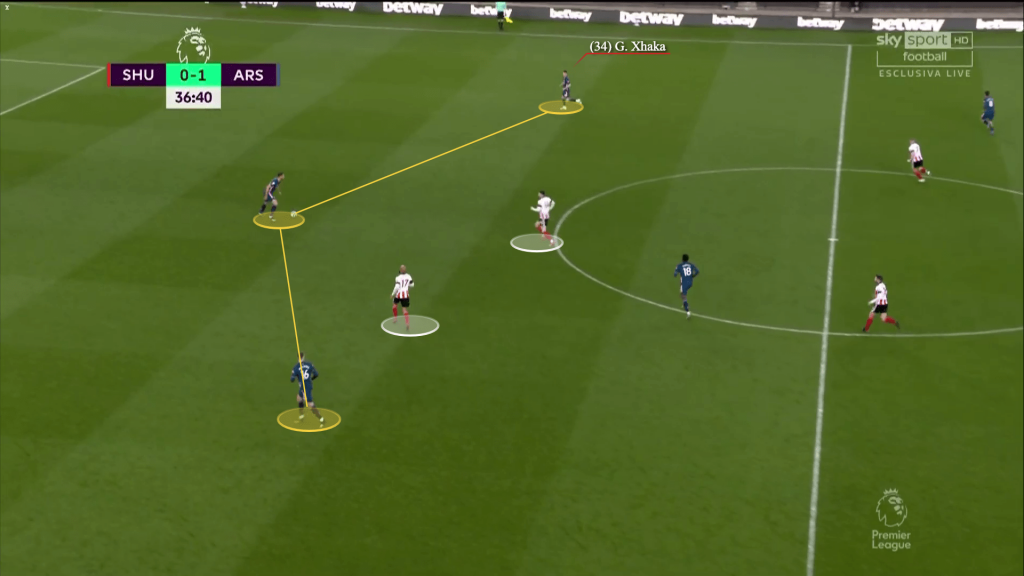 By creating these strategic overloads, Xhaka regularly gets the chance to maraud upfield into vacant spaces, where he then looks to lure out a presser from midfield to open a passing lane, directly find a teammate or help access the free man via a third man combination. 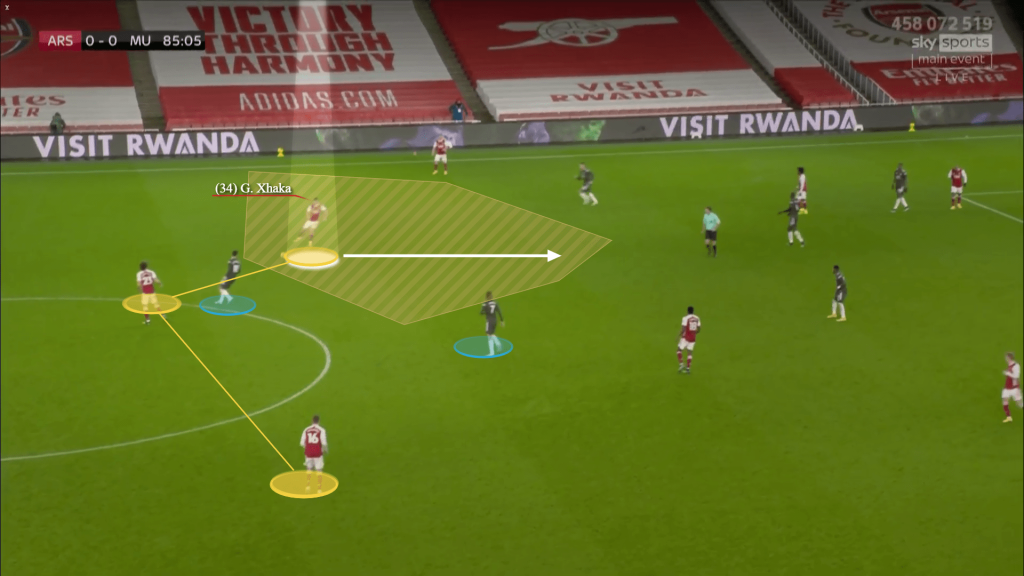 Using this base to progress the ball via his passing and ball carrying so effectively at Arsenal, Mourinho would surely be keen to get the best out of Xhaka by using him in a similar fashion.

As the ball moves up the pitch, Xhaka will do so too, with him offering a good outlet to support wide attacks, recycle possession and manufacture promising scenarios in the final third with his wizardry at picking out teammates.

Although he’s made some high profile mistakes at Arsenal, which he’s been heavily criticised for, his work on the ball is usually excellent, as he’s been largely secure, reliable and crucially able to breathe life into moves with his ambition, imagination and execution.

“He is a guy who plays naturally behind the ball, a bit similar to Petit in the way he plays football,” former coach Wenger explained.

“He likes to sit, give good long balls and be available for the centre-backs. He has a good mixture of short and long balls, and in midfield it is important for us to sometimes stretch defenders. We have a game that is based on shorter passes than other teams, so sometimes you have a player who can kick the longer ball gives us a chance to get some oxygen and some space.” 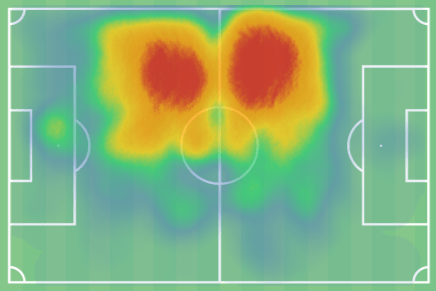 Despite struggling defensively at various stages due to his mobility, lack of speed and rashness in the challenge getting him caught out, the aforementioned role has papered over his issues effectively.

Leaving him far less exposed and alleviating his responsibilities of covering acres of space in central midfield, which was often a result of the team’s tactics leaving him outnumbered, Xhaka has been far better off. Now operating in a defined area of the field, he’s done a fine job of breaking up transitions with interceptions, applying his tackles coherently and covering the space behind his nearby winger and wingback.

Helping his team have far greater balance than under Emery, Xhaka insightfully spoke on how Arteta’s plans have gotten the best out of him, insisting: “The key for a player is to understand Arteta, his philosophy and how he wants to play. I understood this game very quickly. He’s putting me in the positions where I have freedom, where I have the game in front of me. This is what I like. I don’t like the game with my back to the opponent’s goal, I like to see the whole game in front of me.

“That’s something very positive from the coach; he can see how the players like to play, and he saw that very quickly in me. I’m trying to give everything for the team, for him and to give him the confidence back that he’s giving me.”

A player who’s a difference maker both on and off the pitch, Xhaka’s presence at Roma would be valuable on many levels, as the club are looking to return to the Champions League again. Clearly identified as a key piece of Mourinho’s puzzle at Roma, it will be fascinating to see how the tactically astute Portuguese uses Xhaka if he joins.

With excitement ramping up ahead of the new season, signing Xhaka would be a strong statement of intent from Roma that they mean business for the 2021/2022 campaign if they can get the deal over the line.