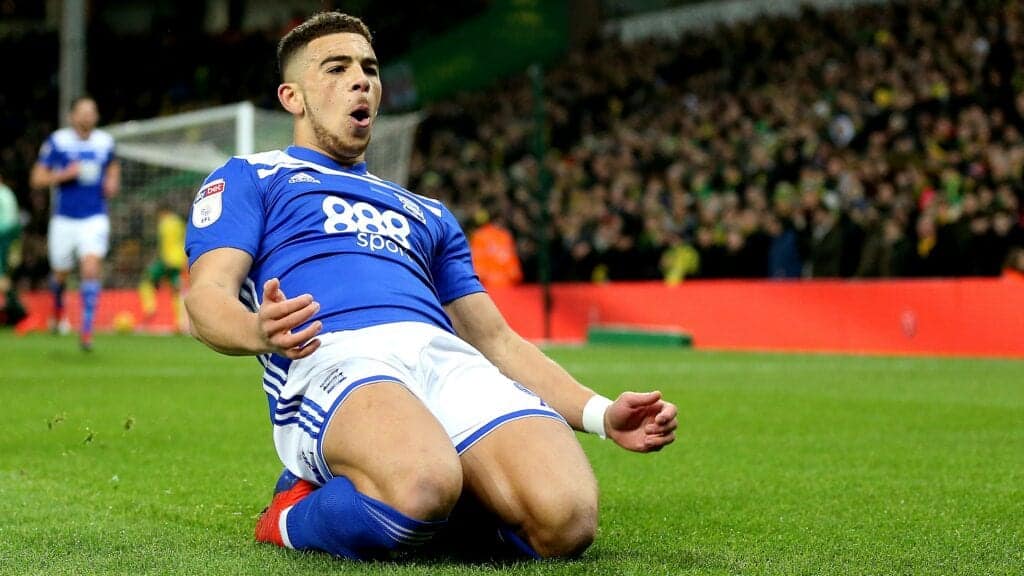 Following a sensational season in the Championship for Birmingham City, where he scored 22 league goals on his way to being nominated for the EFL Player of the Year award and making the team of the season, Che Adams undoubtedly earned his move to Southampton.

Joining the exciting project Ralph Hasenhuttl’s building with the Saints for a fee of £15 million, an amount that represents good value in today’s market, it’ll be fascinating to see how he fares. His tactically astute Austrian manager in Hasenhuttl couldn’t hide his delight when speaking about Adams’ arrival, insisting: “Che fits the profile of player we want to bring to Southampton and is very driven to show what he can do at the highest level.

“We have been monitoring his progress for some time now. He has shown a desire to join us above all other clubs, which shows the positive reputation Southampton has built for developing young players.”

Despite only scoring five goals in his opening 16 league encounters for the Blues last term, Adams then emphatically got going, as he proved his worth by scoring against some of the better teams in the division. On top of finding the back of the net three times vs. Leeds United, he also scored against Norwich City, Middlesbrough, Swansea City, Nottingham Forest (twice), Sheffield Wednesday, Preston North End and scored a memorable hat trick against Hull City.

Playing with intensity, confidence and physicality, the imposing centre forward’s bruising approach made him such an uncomfortable adversary for opponents, as he never let up. Uncompromising and intimidating, the 179 cm hitman uses his strength and aggression effectively when challenging for duels as he knocks markers to the ground, outmuscles them with his arms and bumps them off balance.

The fact the powerful Adams is blessed with wicked pace, an enviable leap and sharp agility only compounds issues for defenders, with him using these traits to devastating effect on many occasions.

Moreover, his capacity to smartly angle and direct his runs in behind or into the box is another huge weapon of his. Combining explosive pace and finesse to pick his openings, he targets gaps between defenders or on their blindside so he can gain an edge by getting crucial separation so he can’t be impeded. This means he gives himself every chance to latch onto through balls, crosses or cutbacks in his quest to find the back of the net. 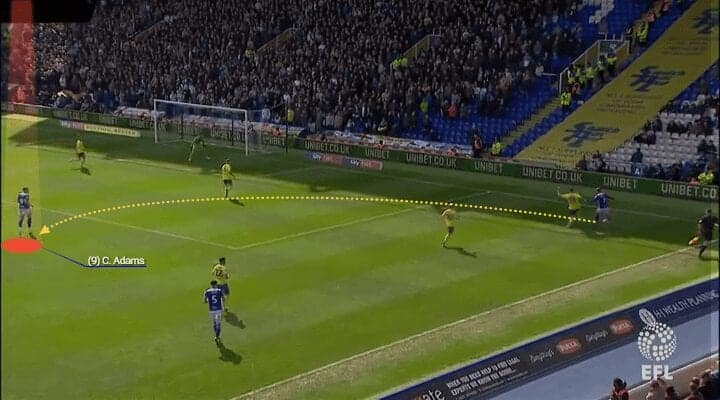 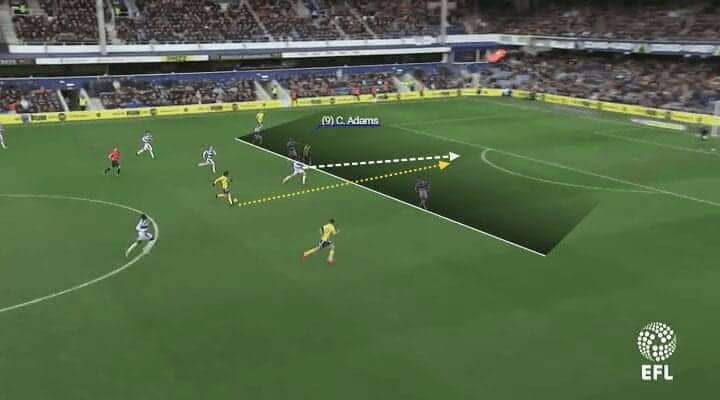 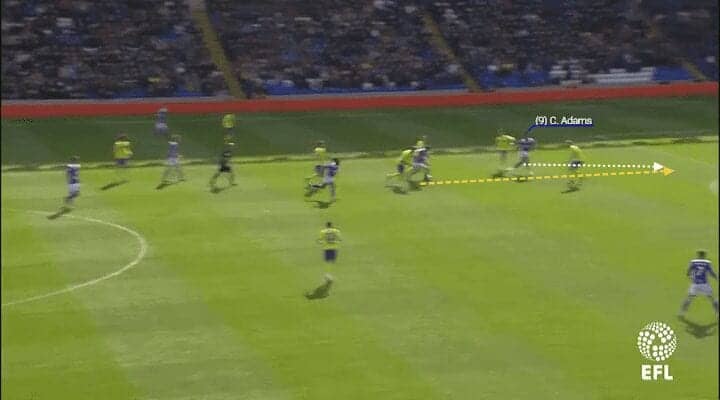 His movement inside the box warrants a particularly special mention, for he uses his striking instincts and reading the play to either attack crosses, hold his run as the defence collapses deep and to tailor his runs according to the ball’s trajectory to maximise his opportunities of applying a fruitful finish.

Thriving alongside strike partner, Lukas Jutkiewicz, at Birmingham, where the formidable duo remarkably bagged a combined 52 goals, their complementary movement also did a top job of generating space. Varying their movement nicely, they used opposite movements shrewdly to disrupt their adversaries’ backlines and continually ask questions on who should mark who, which consequently created space for one of them or their teammates.

Their excellent understanding also saw them be suitably positioned to be prepared for layoffs, flick ons or knock downs from one another. What’s more, the fact one of them would always be playing high and threatening to run in behind notably stretched the space between the opposition’s midfield and defensive lines to manufacture vacant openings in the strategically beneficial 10 spaces.

Picking his moments coherently when to drop deep towards the ball carrier, his hold up play was another string to his bow, which allowed him to not only draw out a defender but also to use his decent play linking skills. Although he’s still developing his technical execution as his touch and distribution can let him down on occasion, he still contributes admirably here.

Showing he can connect moves with some neat and tidy layoffs, one touch passes and through balls, plus use his physical traits to weave out of danger with a nice piece of dribbling, he’s certainly got a solid platform to work with in this regard. 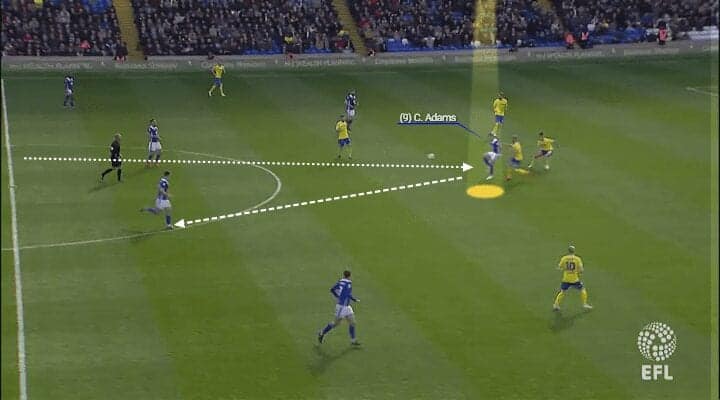 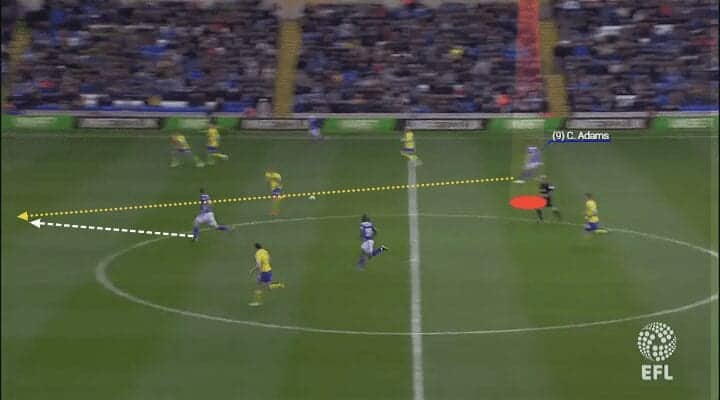 Moreover, his athleticism is a massive weapon on the counter too, where he relishes driving at opponents 1v1 with time and space at his disposal, as he’s quick to put retreating opponents on the back foot.

An impressive finisher to boot, Adams has displayed his ability to score a wide range of goals. Be it poaching efforts inside the box using his sharp reactions and nifty movement, venomous strikes from the edge of the box, superbly placed finishes, composed finishes when isolated vs. the keeper or showing amazing balance to find the net while under pressure, he’s been a real handful. 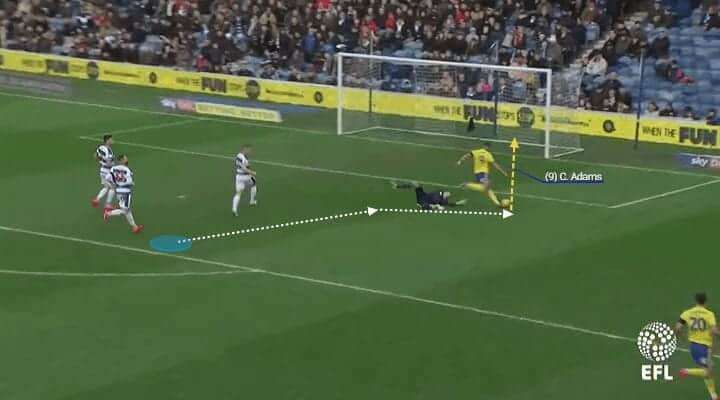 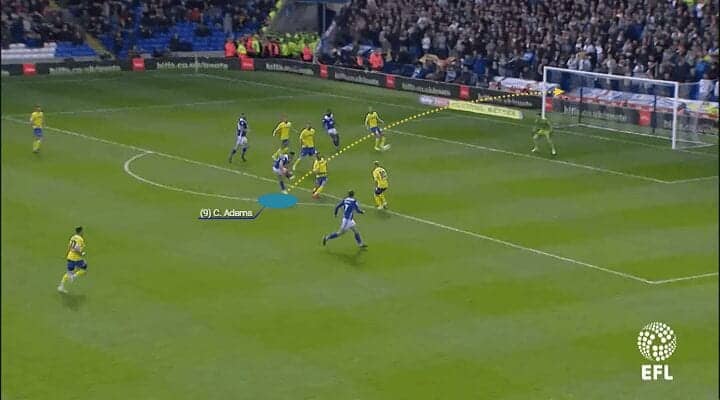 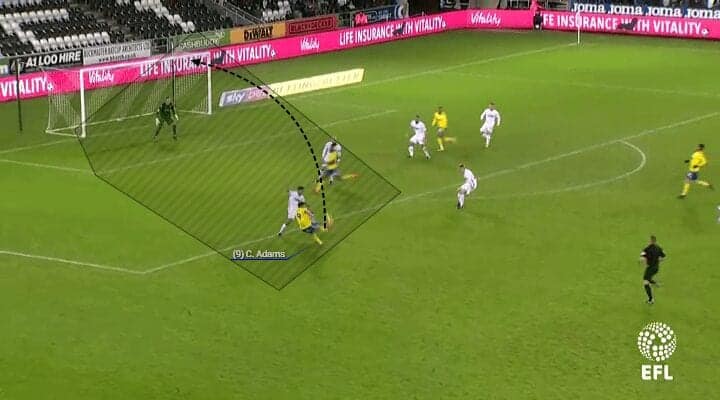 Already a very accomplished player who’s still only 23, there’s every reason to suggest he’ll keep up his incredible upward trajectory, which has seen him rise from non league to the Premier League in a matter of years.

Having handled the step up in class admirably in previous seasons, his biggest challenge yet awaits in the Premier League next term. But judging on his attributes and the mental fortitude he’s shown to get where he is, the talented striker should be right adapting to the demands of the English top flight.