Brownhill firing on all cylinders for Burnley 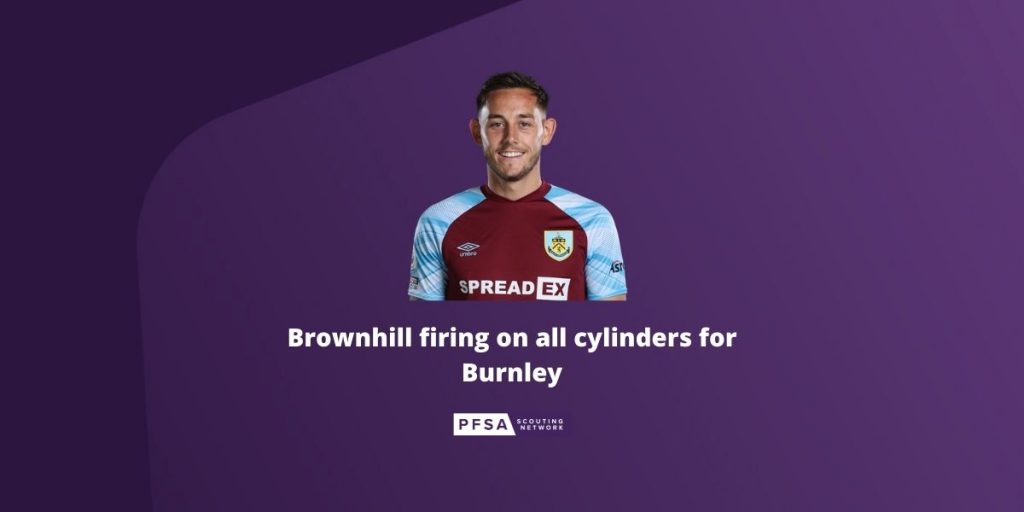 Playing with confidence and clearly enjoying his football at present, the form of Josh Brownhill has been a massive boost for Burnley.

A key figure in Burnley’s recent resurgence, which has seen them only lose three of their last nine matches, the 26-year-old’s performances have helped propel them off the bottom of the table and on the verge of getting out of the relegation zone. “We know where we are on the table, we’re a hard working side and will just keep going,” said Brownhill.

“The lads are brilliant here; we just have to stay together as a unit and hopefully points will soon fall our way.”

Tireless, combative and full of tenacity, his hard-nosed approach on the defensive end sees him set the tone for his teammates to follow, with him serving as an apt embodiment of Sean Dyche’s philosophy. “He (Dyche) asks a lot of his midfielders,” he explained.

“In this division, you tend to play against a three and sometimes even a four. There’s so many bodies that can be around our two in midfield, so he expects a lot of hard work from us. It’s the way he likes to play, and to be in there, you’ve got to work hard.

“It’s a different type of fitness; it’s more high speed running than distance covered, but regardless of which position you play in, you’ve got to work hard and that’s what we do as a team. We’re always defending and attacking until the 95th minute.”

Never one to give an inch in the challenge (on the ground and in the air) and covering the pitch with relentless stamina, he tucks into his stopping work with energy and gusto. Fierce when applying his tackles and always putting his body on the line, the former Bristol City star is very effective at winning back possession and picking up loose balls. 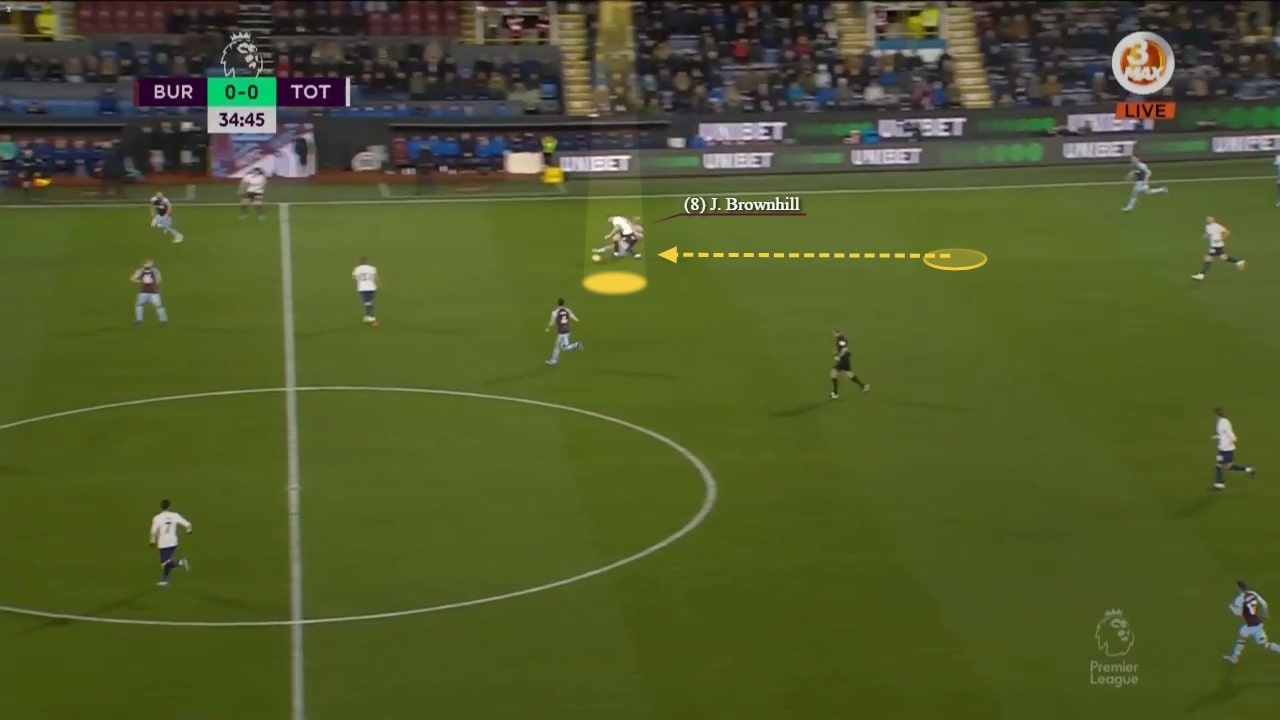 Undertaking marking duties when needed, he knows when to leave his shape to track a runner, support a teammate, form a defensive overload on the flank, respond to pressing triggers or cover for a teammate if they’re out of position. 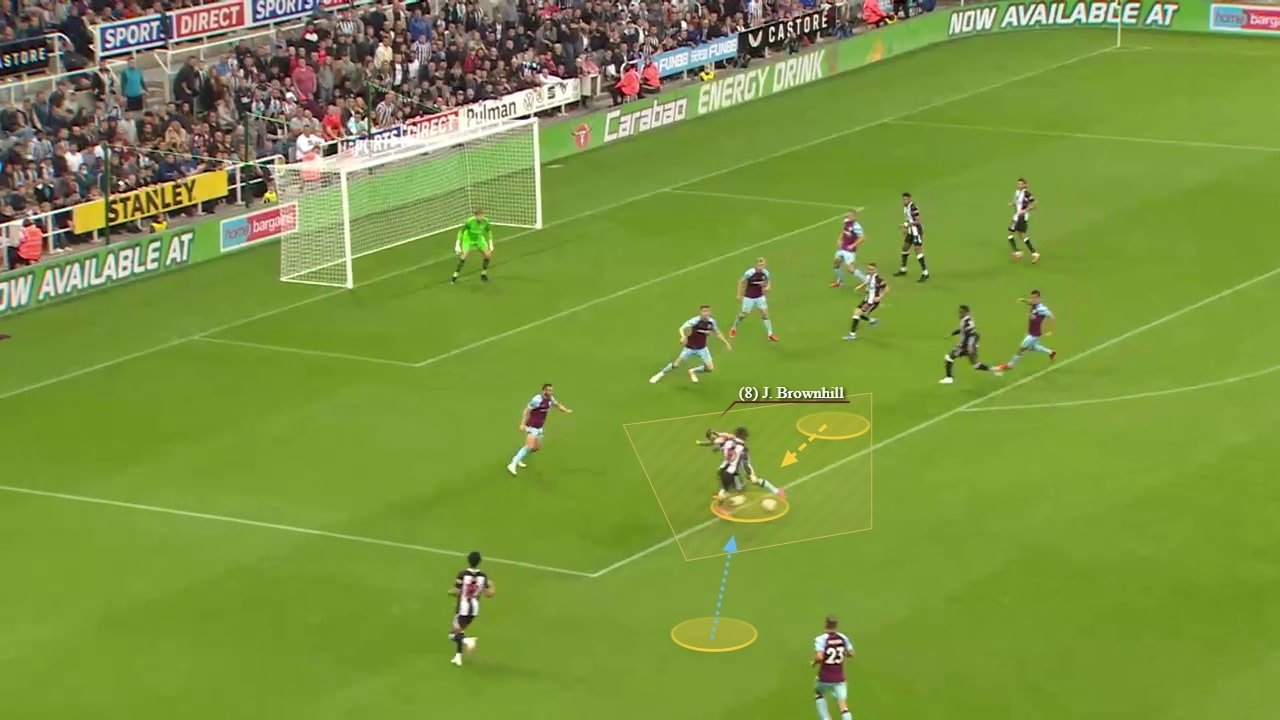 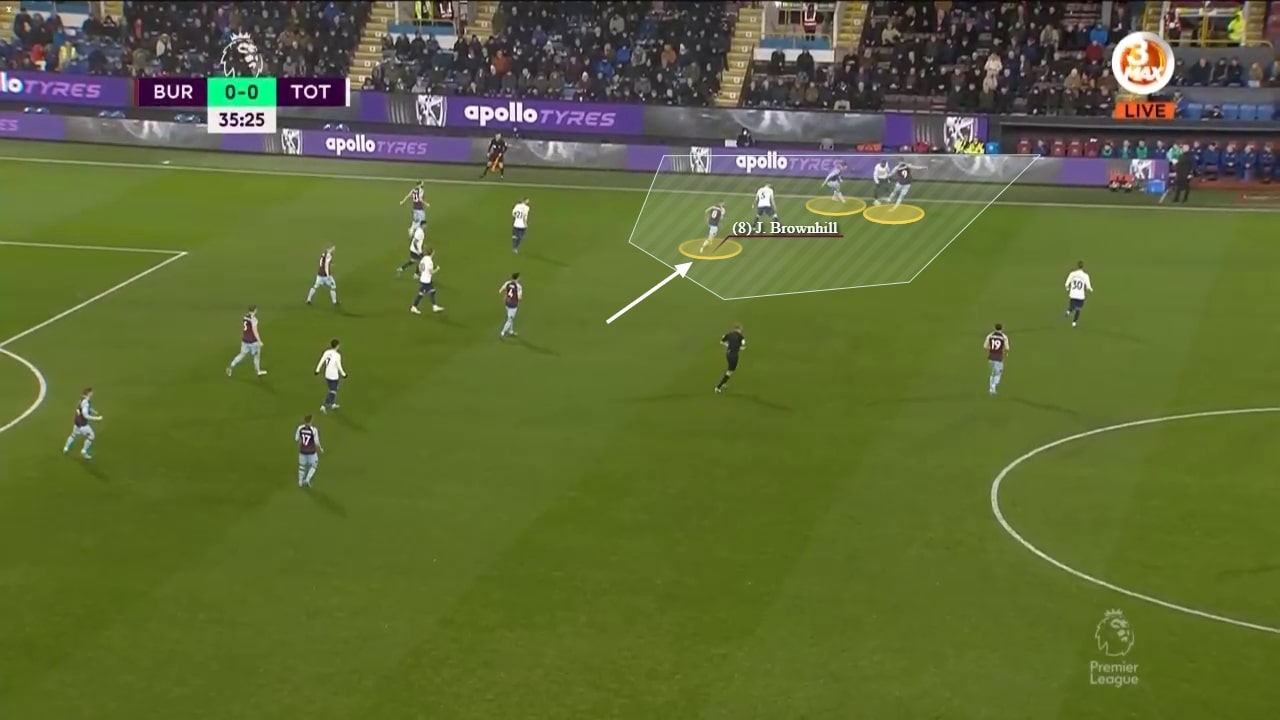 Meanwhile, when he’s zonally marking in Burnley’s disciplined shape, the way he helps his team remain compact by shifting across, dropping back, stepping forward and being awake to opponents has been a highlight. Moreover, how he uses his awareness and scanning has been valuable in protecting his backline and covering dangerous zone 14 locations by using his cover shadow to block passing lanes into key central areas.

Attentive and quick to adjust his positioning depending on the location of the ball and nearby foes, Brownhill’s done a fine job of blending intelligence and brawn in his defensive work. 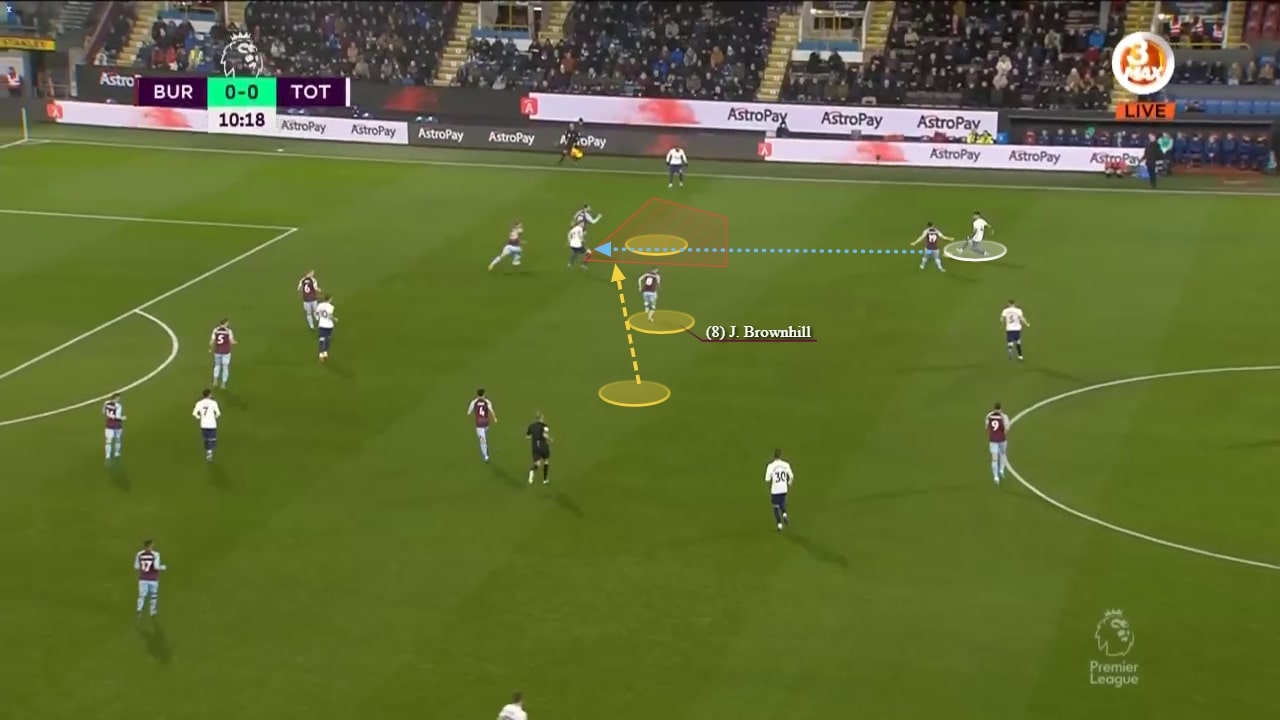 By the numbers, his defensive prowess is demonstrated by the fact he ranks in the top 16% for interceptions (2.27 per 90) and top 25% for aerial duels (1.75 p90) among players in his position across Europe’s top five leagues.

His impact has also been felt keenly on the offensive end in recent weeks as well, where he notably scored his first Premier League goal in his 62nd top flight game against Brighton and Hove Albion.

Backing that up with a game winning assist in Burnley’s memorable win over Tottenham Hotspur, the man who idolises the likes of Steven Gerrard, Frank Lampard and Jordan Henderson (due to his leadership and battling qualities) is posing a vital additional offensive threat. 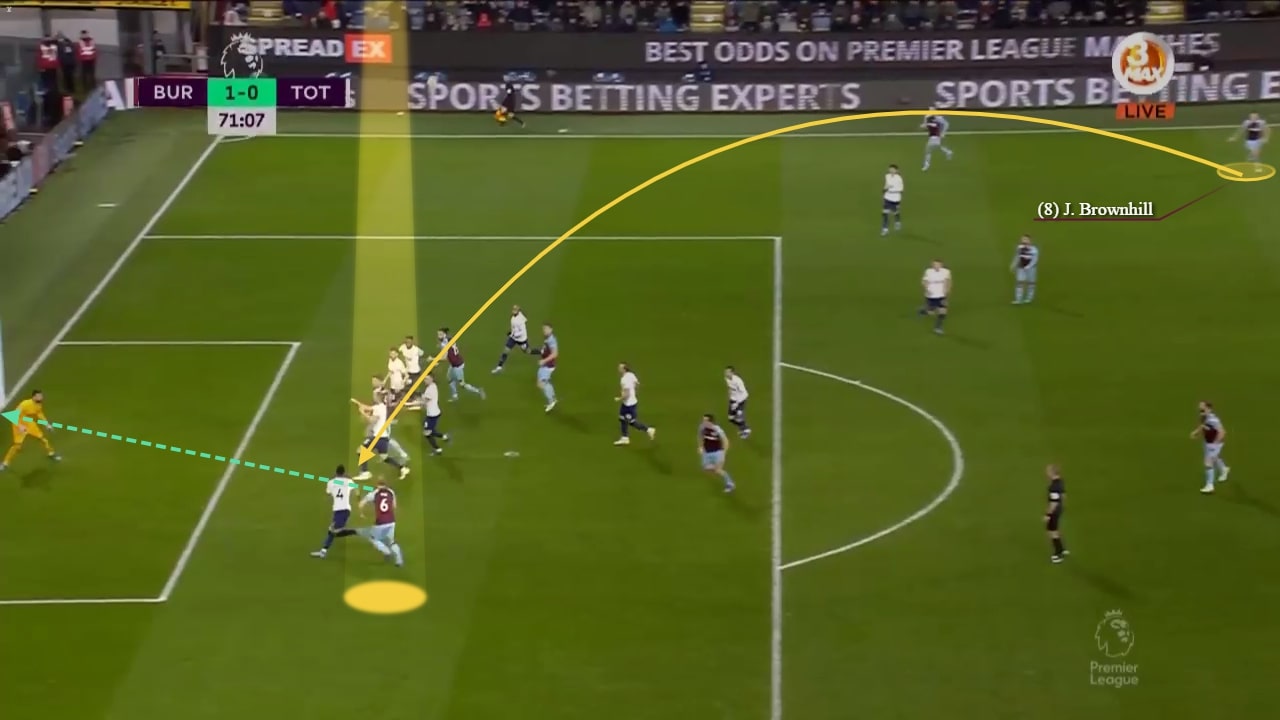 Hitting his straps with his progressive passing via wicked switches of play, line breaking ground passes into the attackers, sharp combination play under pressure and deadly through balls in behind, this has aided Burnley posing a bigger menace.

In addition, his ability to help in build up and recirculate possession coherently adds to his worth with the ball at his feet.

Being proficient at set pieces from dead balls in many areas of the pitch enhances his value and what an asset he is for Dyche’s men going forward. 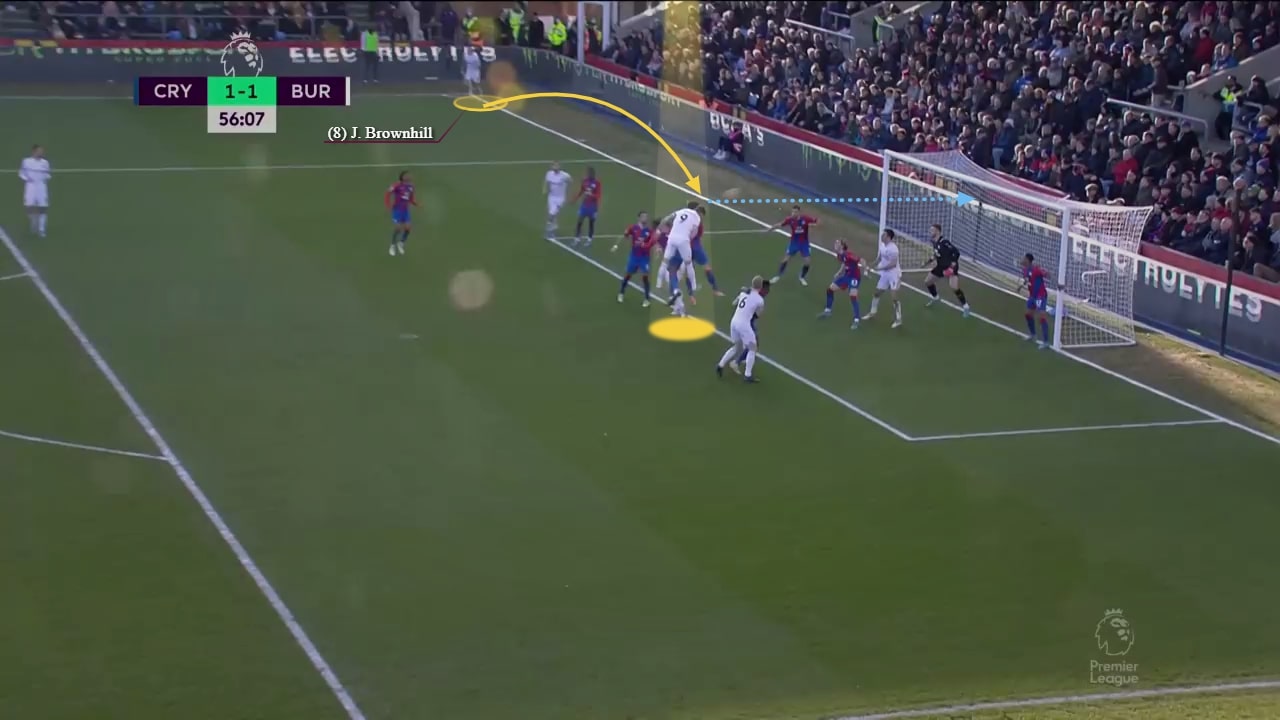 Showing admirable vision, quickly able to spot runners making their move and enabling his team to attack vertically on the counter, Brownhill’s distribution is a key string to his bow.

Some extra upside has arisen from his smart movement to help connect attacks, form overloads (centrally and out wide), burst into the final third with penetrative forward runs and avoid markers with lateral movements to make himself an outlet for the ball holder. Indeed, his clever movement is underlined by his 1.79 touches inside the box p90 (top 22%) and 2.42 progressive passes received p90 (top 28%). 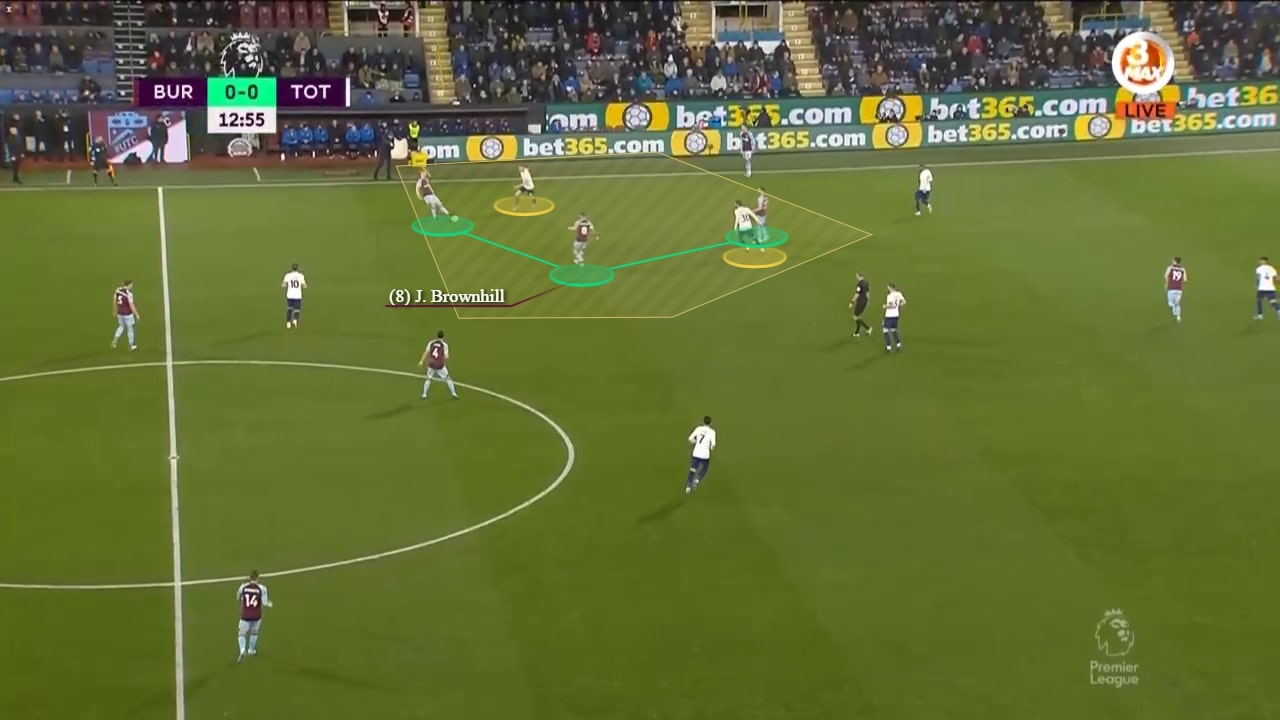 Embarking on some powerful dribbles to either draw out opponents, breeze by them or unbalance defensive shapes, this aspect of his game has compounded issues for his adversaries.

“He’s very energetic, he’s very neat and tidy on the ball, he gets up and down the pitch well and you know what you’re getting when you’re getting a player from Burnley, Sean Dyche, what he expects. And, obviously, he’s proved that he can do this step up, coming from Bristol City, so I’d certainly take him all day,” asserted former Aston Villa midfielder Lee Hendrie.

Improving immensely since his slow start to the campaign and looking right on top of his game, Burnley will be hoping he can continue his purple patch heading into the all-important closing third of the crusade.

Ready for the battle ahead, you can guarantee Brownhill will be doing everything in his power to help Burnley in their quest to avoid relegation.