Brilliant Benrahma lighting up the Championship for Brentford 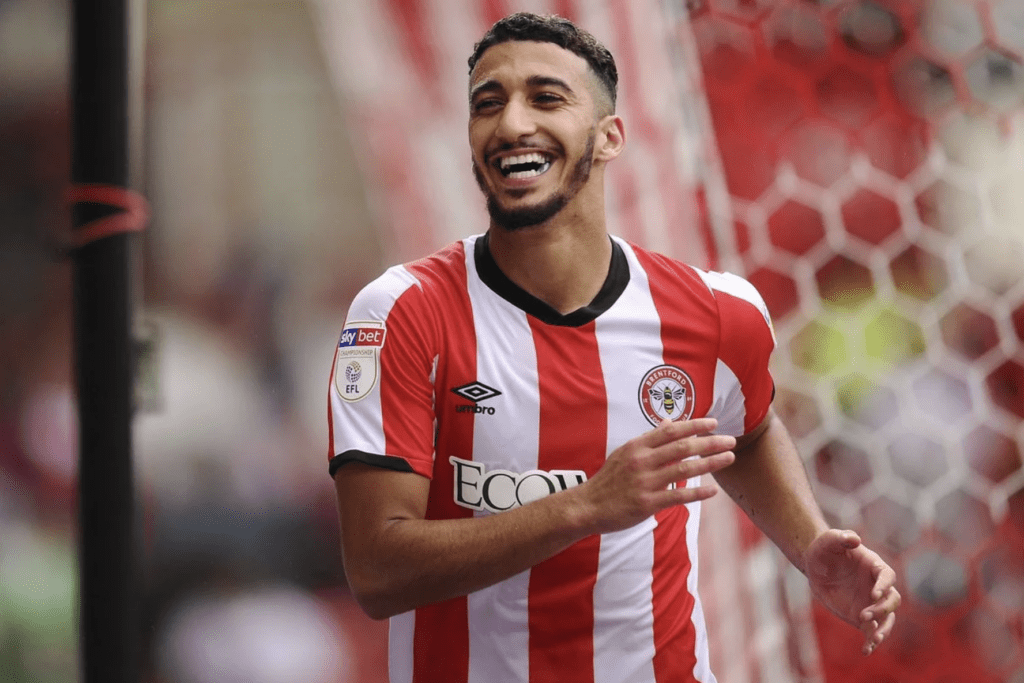 Unquestionably one of the most talented players in the Championship, it comes as no surprise that Said Benrahma is attracting interest from the likes of Arsenal, Leicester City, Tottenham Hotspur, West Ham United and Newcastle United.

Thankfully, however, Brentford held on to their prized asset in the January transfer window, meaning all those transfer talks can wait, as Benrahma’s chief focus will be helping high flying Brentford secure Premier League promotion.

Forming a formidable attacking unit alongside Bryan Mbeumo and Ollie Watkins, the trio have been named the BMW, with them wreaking havoc on Championship defences all over. Registering an impressive nine goals and six assists in 26 league appearances, the Algerian maestro’s been a key driving force for Thomas Frank’s men.

Granted plenty of freedom to interchange positions and get into dangerous central positions by his manager from his nominal wide post, Benrahma’s intelligent movement ensures he’s a tough man to track. Indeed, by strategically drifting in and out of zones all over the attacking third, this places doubt for defenders in regard to who they should mark. Altering their reference points so shrewdly, opponents subsequently struggle to make a decision with clarity, thus allowing Benrahma or a teammate to get free in quality locations.

So good at finding space between the lines, receiving in the half spaces or wide, where he can be isolated and use his wizardry on the dribble to get at his man, dropping deeper into midfield or when surging in behind, Benrahma’s been an elusive man to keep tabs on. 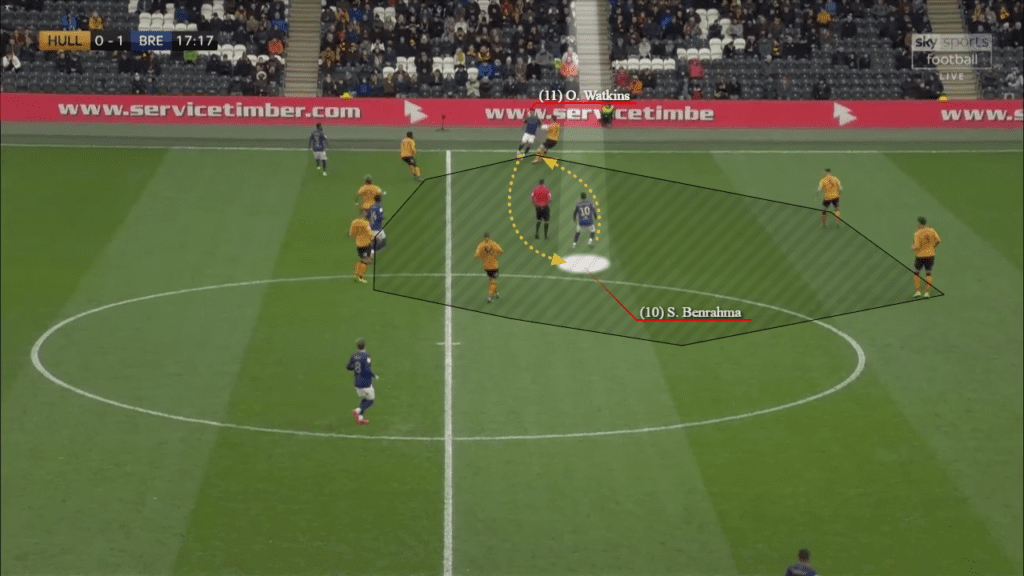 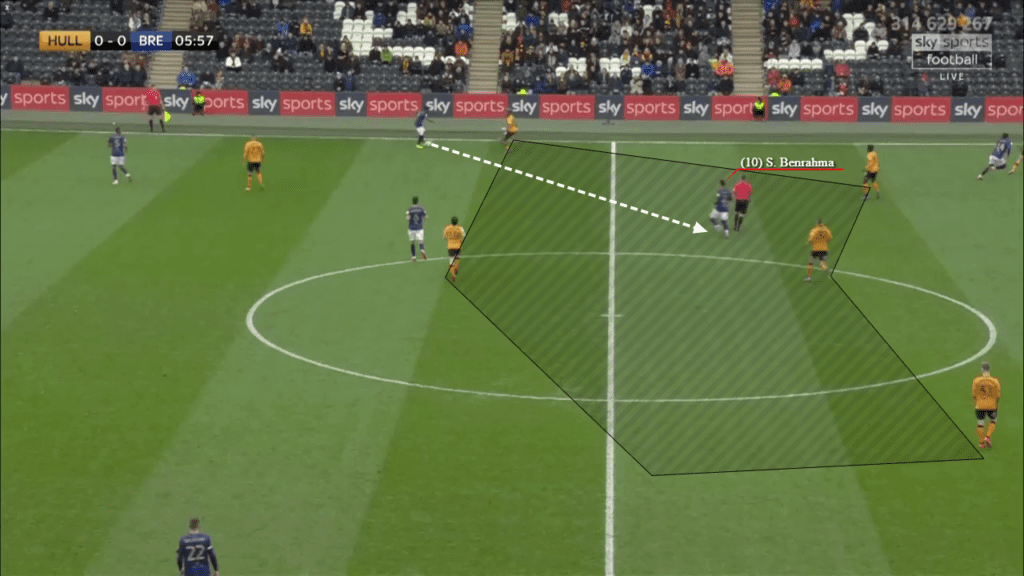 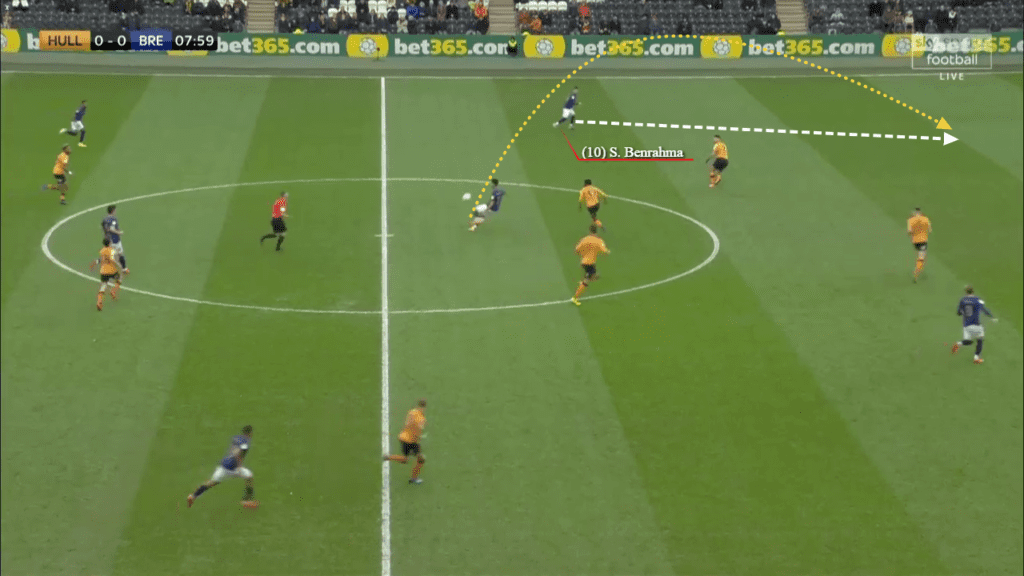 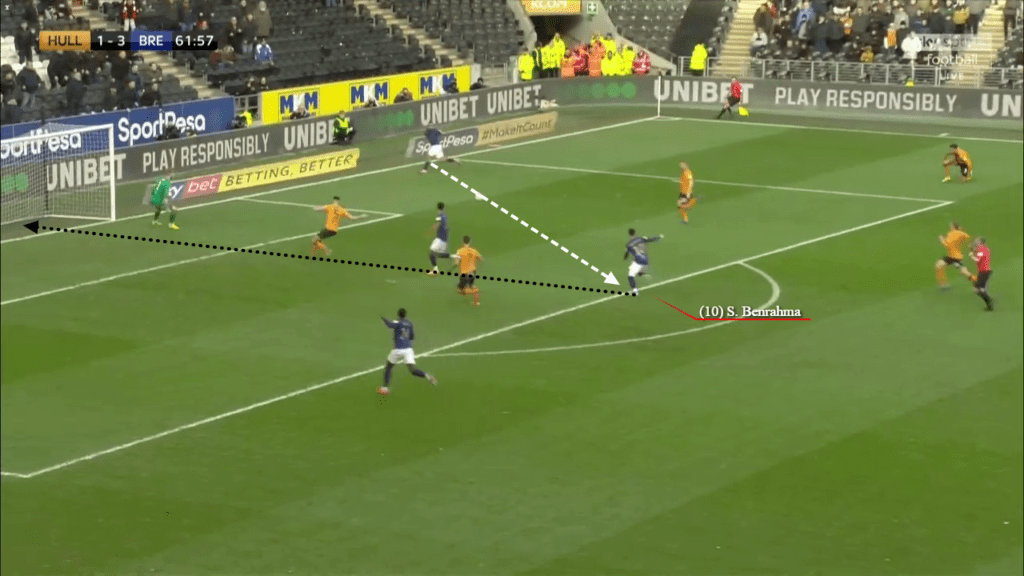 Having generated such strong, complementary relationships with his colleagues, it’s a joy to watch them dovetail together, as their verbal and non verbal communication is at a high level, with them well and truly on the same page.

An absolute genius with the ball at his feet, the former Nice man’s always on hand to produce moments of magic with his aptitude in this regard. Blessed with good awareness due to his scanning, plus a slick first touch and super tight ball control, this gives him a formidable base from which to undertake his work. So ingenuitive and full of imagination and confidence when taking on his man, he uses nutmegs, stepovers, feints, pass and shot fakes and electric changes of pace and direction to outfox his trackers.

So hard to read due to his vast repertoire of skills and the sheer speed at which he executes his actions at, this, in combination with his brilliant strength and low centre of gravity, only further complicates things for his foes. Moreover, the latter sees him remain balanced when placed under pressure and able to hold his ground while opponents challenge him. A key byproduct of this, is that it means his markers often have to bring him down in their quest to stop him, which allows his team to win free kicks in dangerous positions (another compartment that Benrahma shines in).

The technically elite Algerian supplements the afore with his creative passing that he chiefly uses to animate things for his team in the final third. Whether combining intricately in close quarters, sliding in incisive through balls, hitting dinks over the top, breaking the lines or striking wicked crosses and cutbacks, his threat is amplified by his distribution.

A player who’s not afraid to attempt ambitious passes that can unlock defences, his confidence in his ability is very admirable, as his vision and capacity to engineer openings out of nowhere is a real game changer. Often weighting and timing his passes superbly, the likes of Mbeumo and Watkins have clearly relished the fine service he provides. 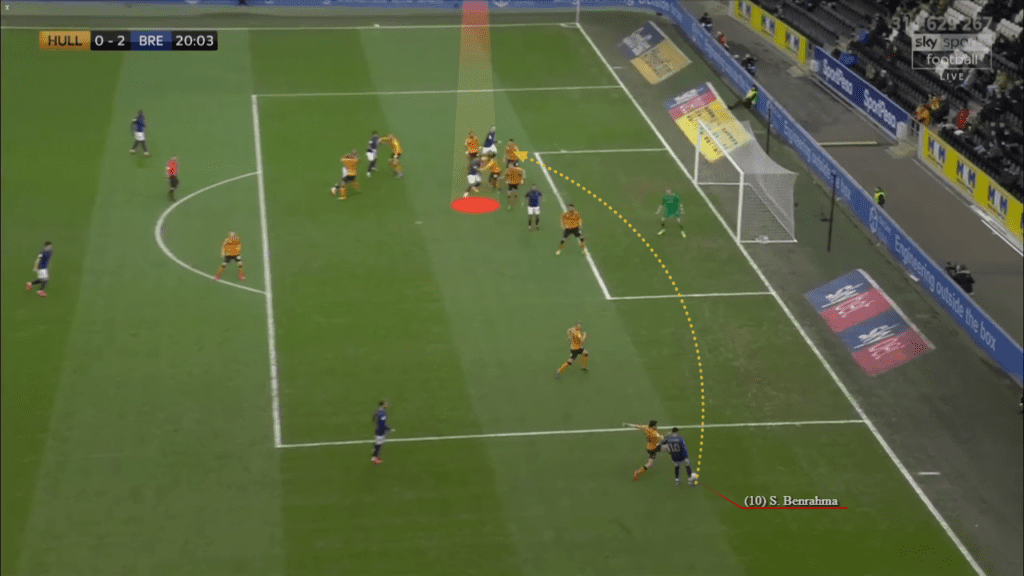 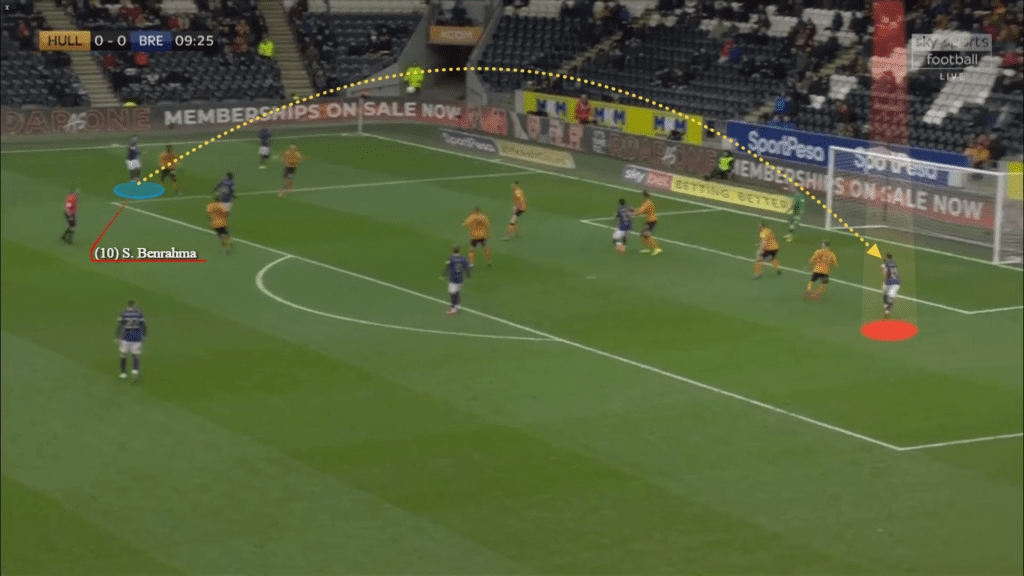 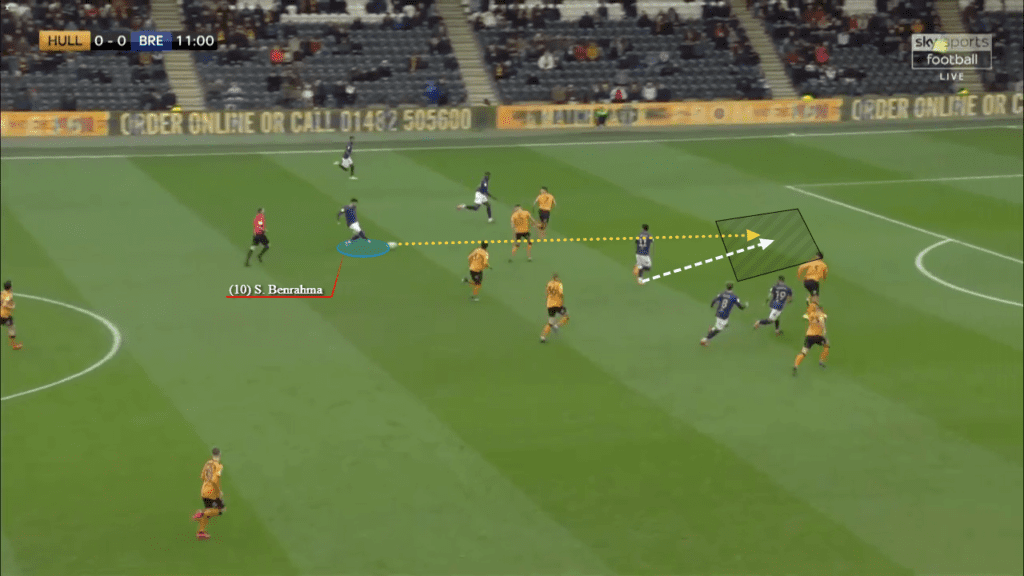 Fleet of foot, fast of mind and boasting great pace and strength, Benrahma has just about has all the desired traits of a modern day attacking midfielder. Factor in his eye for goal and chance manufacturing qualities and it’s easy to see why he’s one of the most outstanding players in England’s second tier. 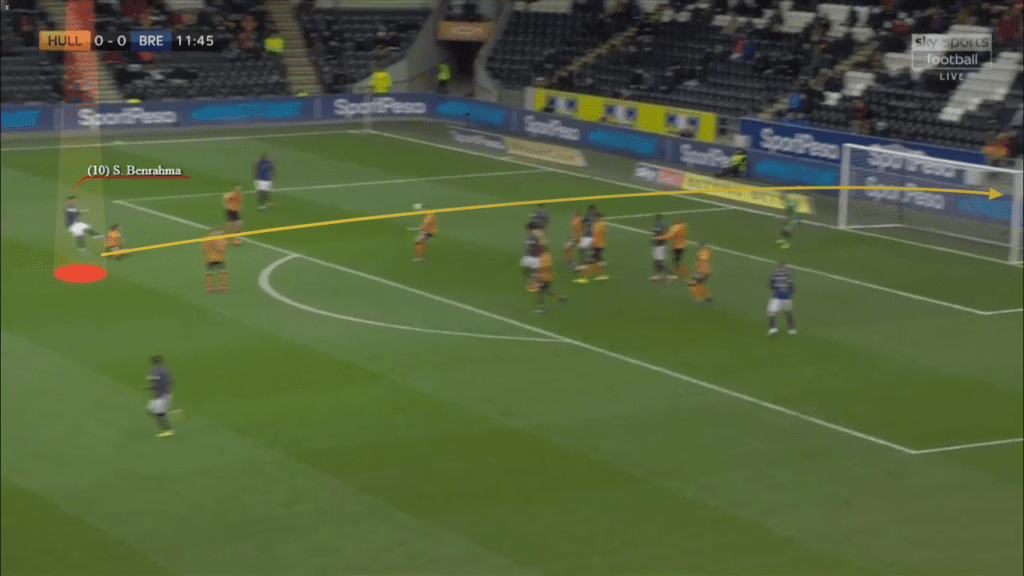 Upon taking his statistics into account, and this further illustrates his class, for he’s completing 3.85 shots per game, 5.01 dribbles pg, 4.47 touches inside the box pg, 3.74 accurate passes into the final third pg, 3.41 progressive runs pg, 1.69 shot assists pg and 1.06 crosses pg.

With this brilliant Brentford side right in contention for promotion, they’ll be certainly hoping they can achieve this goal, as Benrahma looks set to be making the step up to the Premier League with or without them.