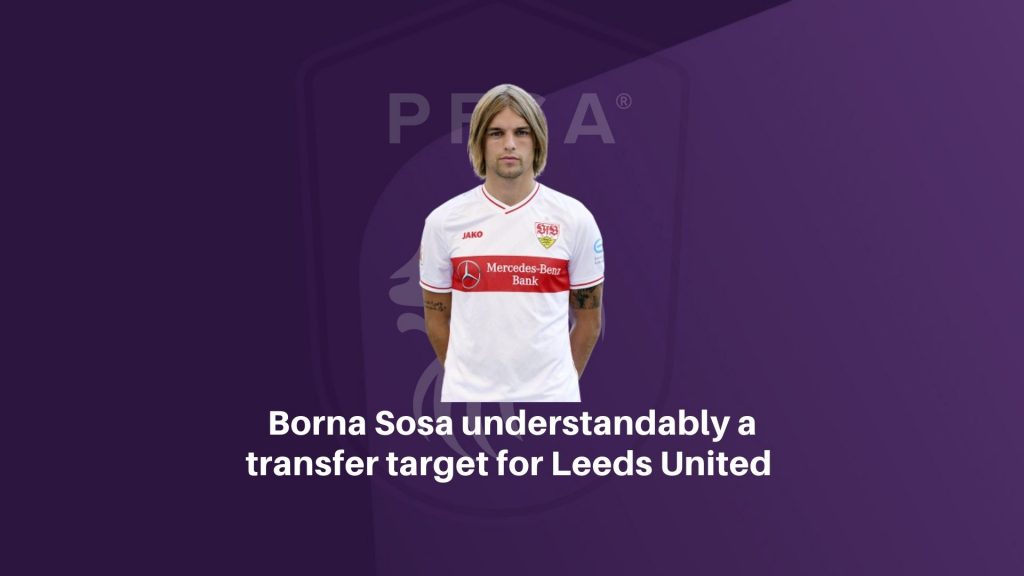 Borna Sosa’s brilliant Bundesliga season has seen him tipped to make a big move in this summer’s transfer window.

Having supplied 10 assists in his 26 league appearances and been an integral part of Pellegrino Matarazzo’s exciting VfB Stuttgart side, he’s now a man in demand. At this stage, Leeds United appear to be the frontrunners to sign the talented Croatian, who’s excelled at both left back and left wing back this campaign.

Drawing comparisons to David Beckham due to his beautiful ball striking technique and flowing blonde locks, the 23-year-old interestingly cites the former star as one of his idols, stating: “It’s hard to compare yourself to a football legend. But is it nice to hear something like that? Naturally. And do we have anything in common in our crosses? We do. It’s not easy to learn. You either have it or you don’t.”

Stuttgart sporting director Sven Mislintat then added: “Borna’s said himself that Beckham is his role model, and I think he has the same qualities. He puts in crosses from every angle: sometimes chipped, sometimes drilled, sometimes flat, sometimes in behind, sometimes to the front post, other times to the back post. His left foot is a real weapon.”

To continue on the theme of his wand of his left foot, and it serves him beautifully in so many situations. An exceptional crosser, as mentioned above, this enables him to consistently create chances for his teammates from a variety of situations.

Able to strike his deliveries with power, placement, curl, loft and with his first touch, he’s proven why he’s one of the elite crossers in Europe. Extremely accurate and precise, he obliges runners superbly, for he can pick his spots with incision. So be it finding a colleague at the front or back post, in the centre, at the top of the box as the defence collapses deeper or identifying blindside runners, Sosa has a cross to match any scenario. 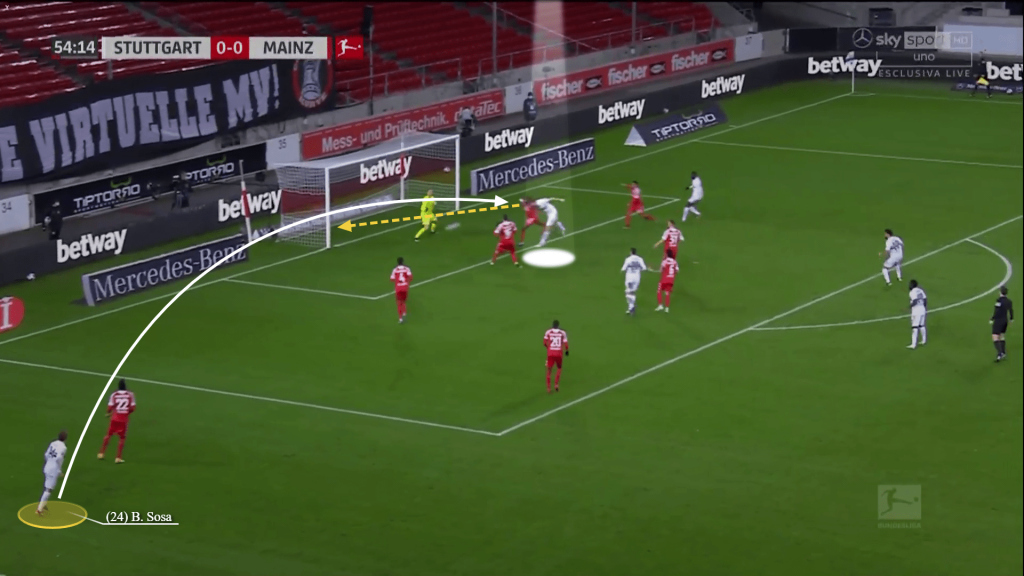 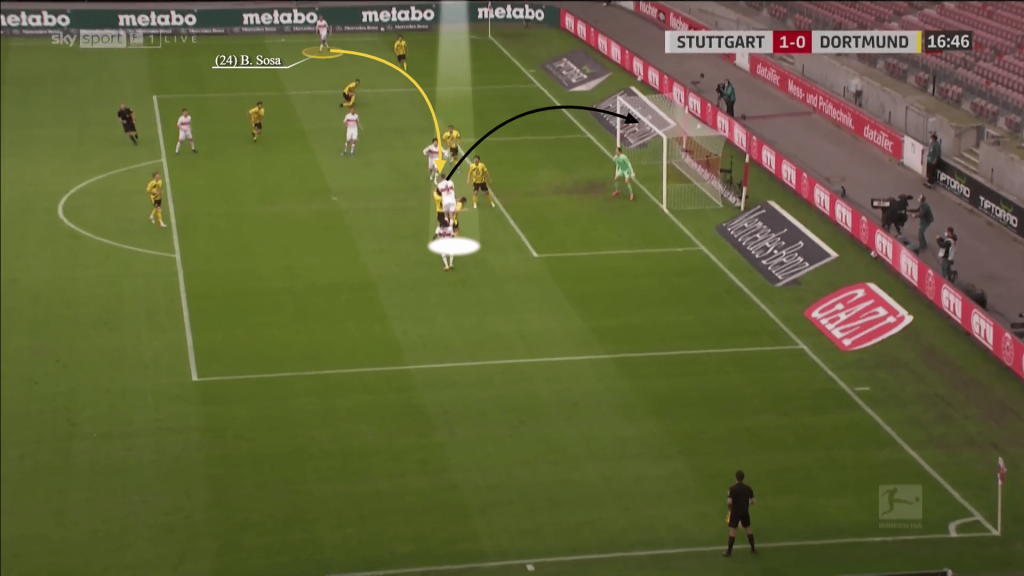 Tailoring the pace and trajectory of his crosses and cutbacks precisely enhances his menace, for this further increases his teammates’ ability to latch onto his deliveries.

Possessing tremendous vision to match his execution, how he gets his head up to assess his options puts him in good stead to hit his targets.

In the top one percent of fullbacks/wingbacks in the top five European leagues for assists p90 (0.40) and top four percent for shot-creating actions p90 (3.31), this offers a testament to his prowess in this area. In addition, the fact he ranks third in the Bundesliga for crosses into the six yard box (0.80 p90), 20th for accuracy (39.55%) and third for most crosses p90 (7.41) further underlines his value.

Being such a master at striking set pieces from all over, this is another vital string to his bow. From corners and dead balls from all over, Sosa has a delivery to match the occasion. As can be seen below, Sosa’s silver service is a fantastic weapon, for it can generate quality opportunities from seemingly non-threatening areas. 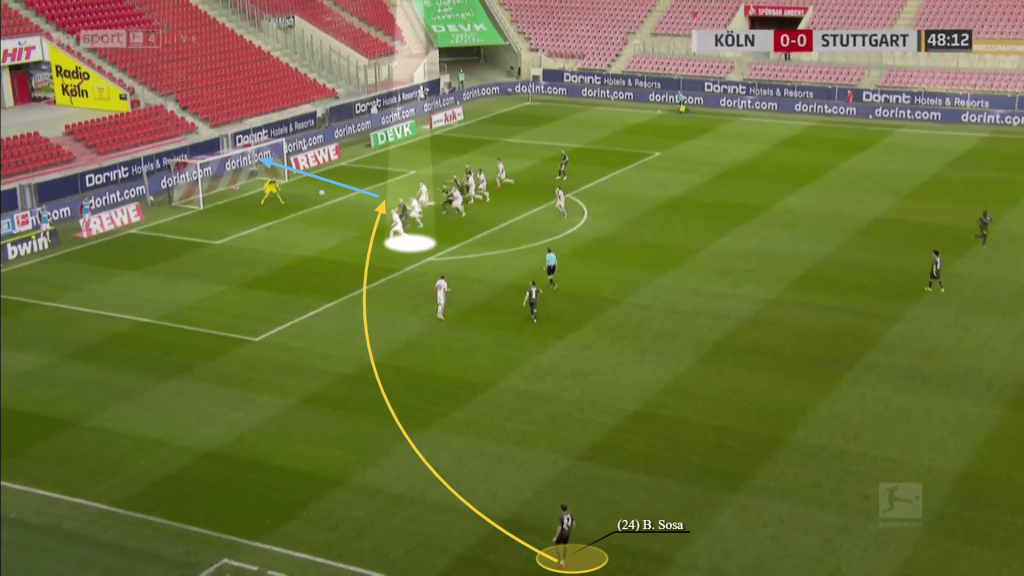 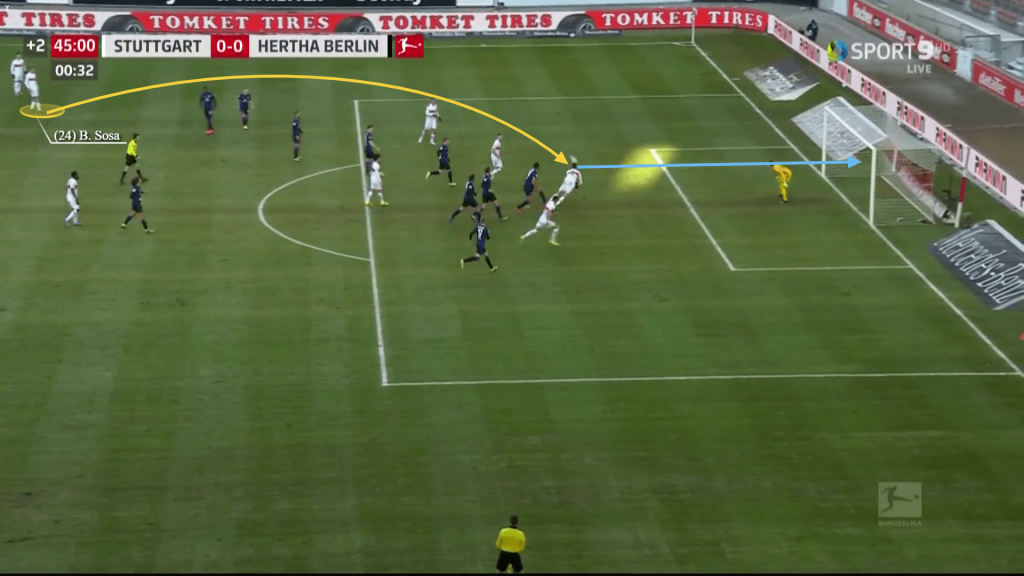 Aside from his crossing, Sosa also contributes with his neat and tidy passing during build up, where he helps construct passages and recirculates possession coherently. Adept at hitting through balls, penetrative infield line-breaking passes and engaging in crisp combination play, these are important skills as well.

Sosa supplements the aforementioned with his movement, where he parlays pace and intelligence to heap pressure on opposition backlines. Adding width and depth to attacks in order to stretch rearguards vertically and horizontally, Sosa relishes every opportunity to maraud forward. Timing his runs so he can enjoy time to weigh up his options before whipping balls into the area and to arrive late to exploit the blindside of opponents, opponents have their hands full combating him. 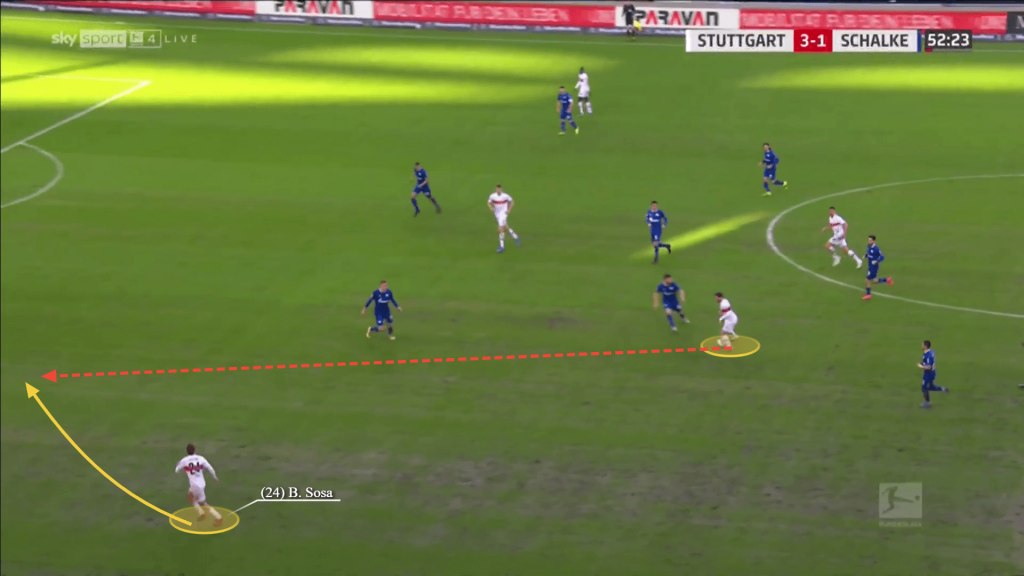 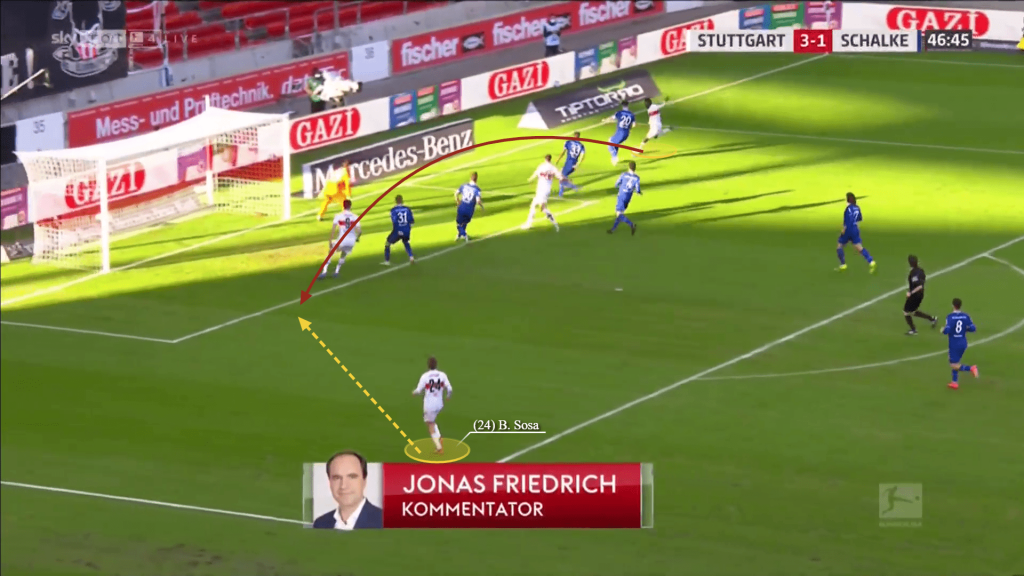 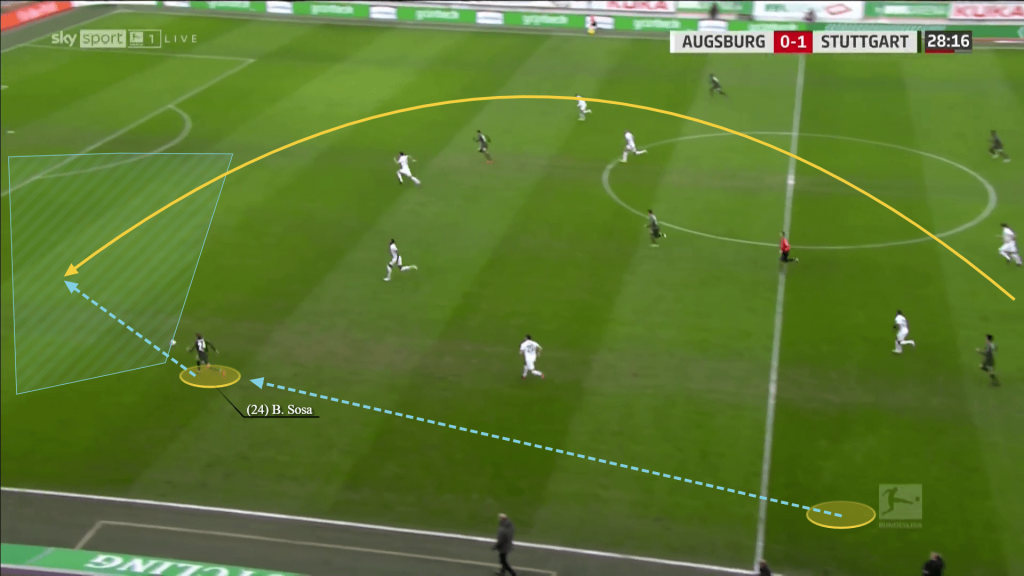 The way he smartly positions himself to help form overloads to aid Stuttgart’s progressing through the thirds and how he rotates with his colleagues so he can embark on crafty underlaps compounds issue for adversaries. 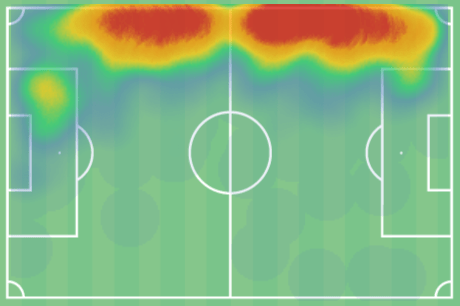 Some further numbers of note from his offensive exhibits come from his 7.10 progressive ball carries p90, 4.36 progressive passes p90 and 2.07 touches inside the box p90.

Although his attacking output has been underlined, Sosa’s been pretty sound defensively too despite making the odd error or suffering from some lapses in concentration. Standing 186 cm, he’s good in the air and can usually hold his own in duels and in 1v1s. In addition, considering he’s a solid high presser and Marcelo Bielsa is a master at improving players in all areas, it’s understandable why he’s a target for Leeds.

Having really stamped his mark at the highest level this campaign, it’ll be intriguing to see where Sosa’s plying his trade next term, with there set to be no shortage of suitors.

He won’t come cheap though, for he’s expected to cost around £20 million. But whoever takes that gamble won’t be disappointed, as the ever improving 23-year-old is unquestionably a player full of upside – especially going forward.