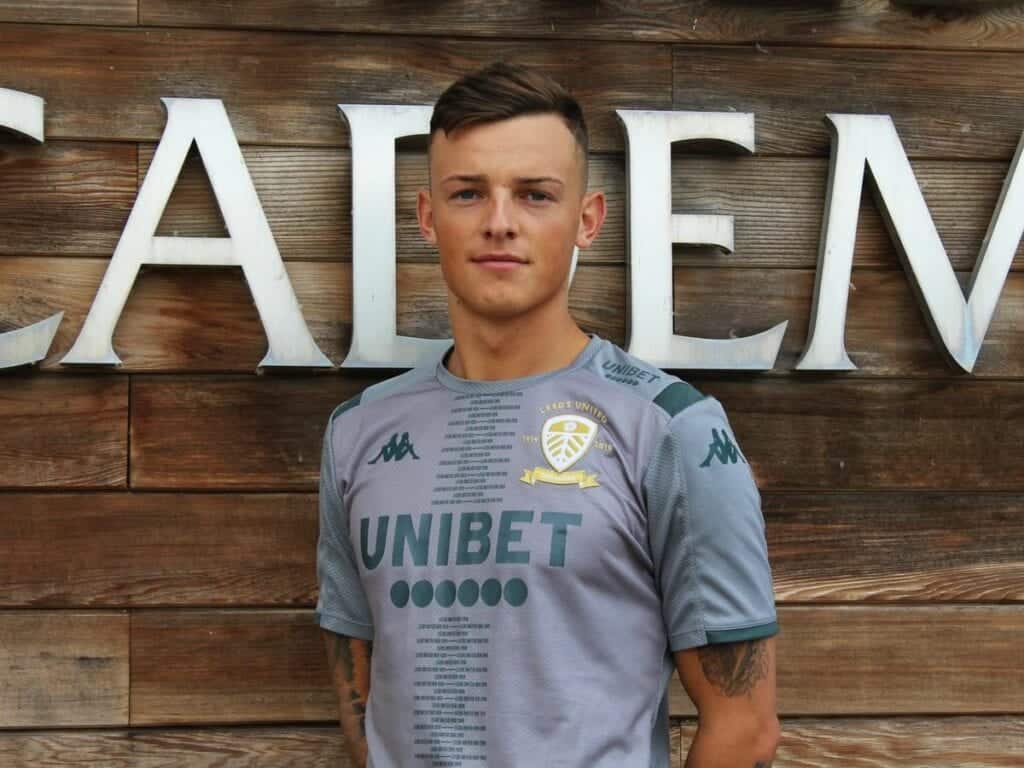 Ben White’s tremendous form has been a real highlight of Leeds United’s excellent start to the season, which sees them currently occupy fifth in the standings just two points behind leaders West Bromwich Albion.

Joining Marcelo Bielsa’s men in the summer on loan from Brighton and Hove Albion, White’s wasted little time in establishing himself as a key piece in the Argentine maestro’s setup.

Thriving under Bielsa’s tactically sophisticated methodology and serving as a brilliant central defensive partner to the formidable Liam Cooper, it’s been wonderful to see him adapt so quickly to life at Elland Road, on his way to being one of the standout performers in the Championship so far.

“It’s a pleasure to play alongside him,” gleamed Cooper. “I have had a lot of people say to me how good is he and I have said he is top, he is going to be unbelievable.

“He’s 21 years old and he plays the game as if he has played 600 league games. He’s so calm on the ball and it helps us. It oozes confidence through us and he’s been unbelievable so far but it’s a 46 game season and he’s got to keep his head right and keep his attitude right and he’ll go on to have an amazing career.”

So assured and polished when executing his actions on both sides of the ball, Cooper’s comments are spot on regarding White, for he’s hardly put a foot wrong.

A masterful passer who’s so composed with the ball at his feet, the Englishman’s been an integral figure in building out from the back in true Bielsa fashion. Measuring and weighting his passes precisely, he’s been a huge asset in not only constructing attacks but also in finding his forwards in advanced locations. Whether it be hitting searing switches of play, precise through balls in behind, penetrative line breaking passes into the feet of his attackers or recirculating possession with tempo while waiting for a weakness to arise in the opposition block, his distribution has been a joy to watch. 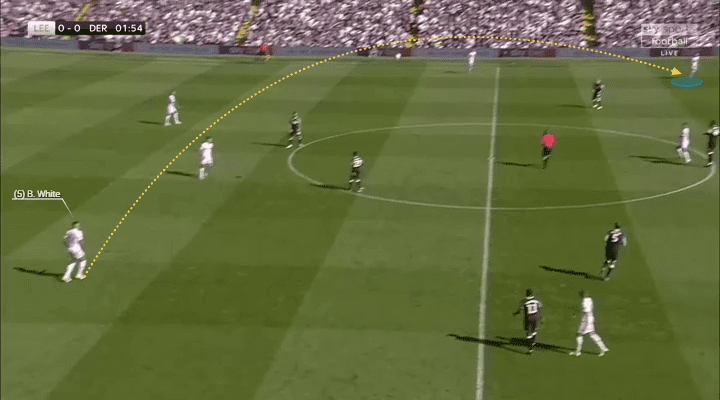 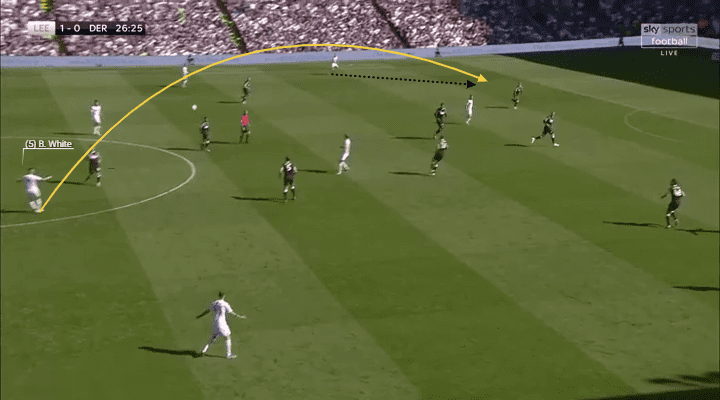 White accompanies the afore with his accomplished ball carrying, which sees him dribble upfield whenever the opportunity arises. Not only does this allow his team to gain territory and push another number forward, it also lures out a press that can crucially generate a free man or open a passing lane. Boasting good control and touch, he can notably beat opponents 1v1, which further manipulates the opposition structure for his team to exploit.

Although his defensive work might not be as eye-catching, his work in this regard has been of a similarly high standard. Athletic and a possessing solid awareness, White’s been largely sound at tracking runners in behind, into the box or when picking up any blown marking assignments. Using his pace and reaction times, in combination with his head scanning, this has meant he’s alert so he can move quickly and quell the danger. 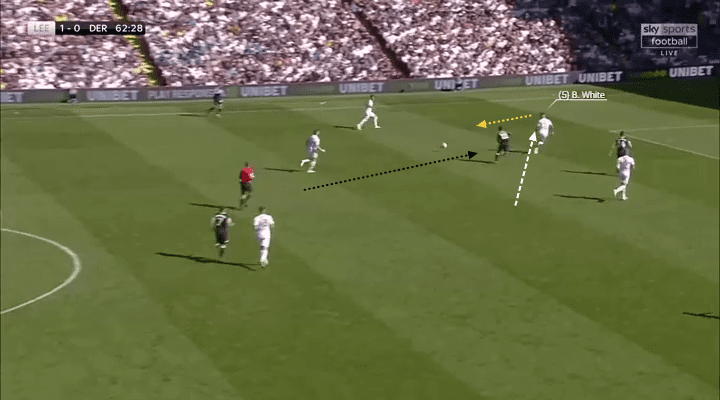 The excellent judgement and decision making he shows has been another positive, for he rarely makes a poor choice. This transfers over into other aspects of his defending, as he picks his moments when to respond to a pressing trigger like when his man drops deep with his back to goal, push back, shift across, cover for a colleague or get on his bike and follow depth runners as mentioned before. 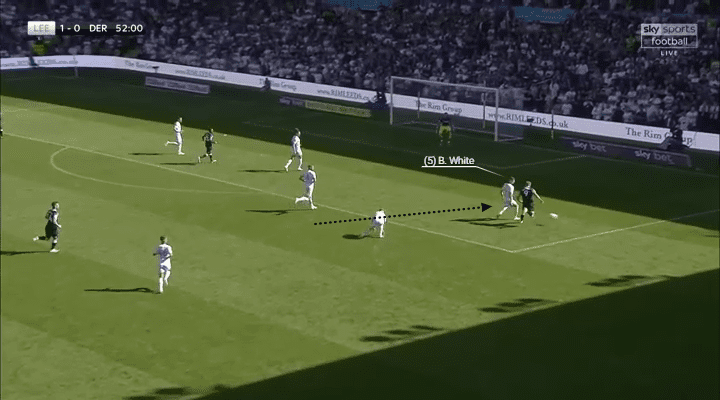 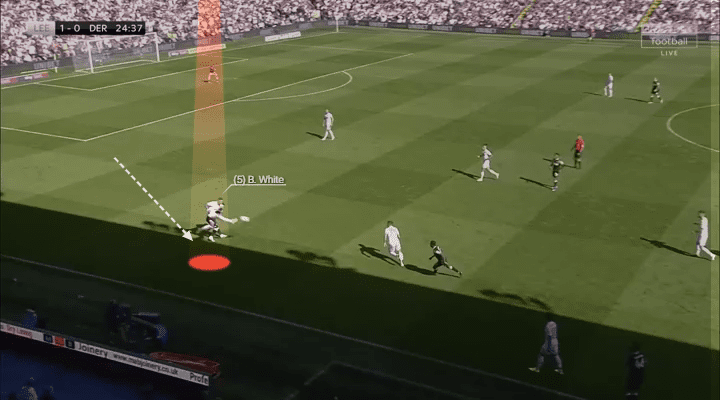 Being such a coherent reader the play, there’s been much to like about his quality in aerial duels and how he uses his long legs and timing to recover possession to excel in these areas. Swift to pick up the ball’s flight path so he can position himself accordingly to snuff out crosses and cutbacks, he handles these instances competently. 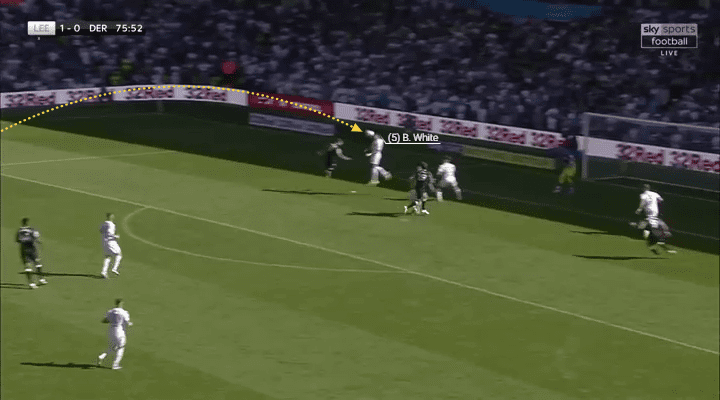 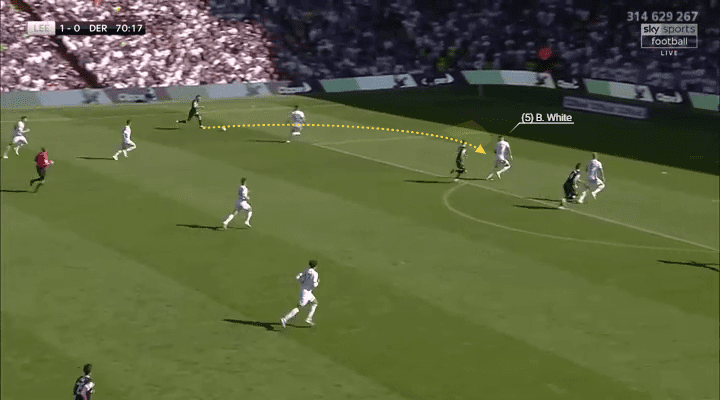 Meanwhile, the way he’s chimed in with some admirable tackles when defending 1v1 or when leaving his post has seen him break up attacks efficiently.

Positionally sound while blending force and intelligence, it’s been hard not to admire White going about his stopping work. Clearly impressed, former Leeds man Jermaine Beckford offered a glowing appraisal of the accomplished central defender. “He’s very composed and you know exactly what you’re going to get from him,” he explained.

“He fills you with confidence. If he’s in a one-on-one situation, you aren’t panicking or thinking ‘he’s definitely getting past him’. There are not many players that are getting past him, and if they do, it isn’t going to be an easy ride.”

A uniquely skilled modern defender, who has all the ingredients to one day be a star, it’ll be intriguing to continue to monitor his rapid development in the ultra competitive confines of the Championship.