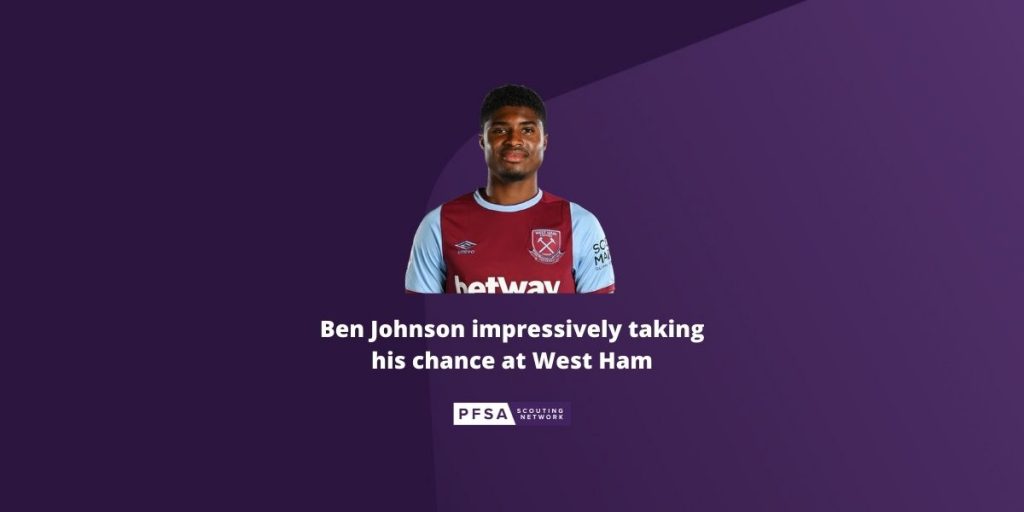 Ben Johnson’s form for West Ham has seen him rapidly propel himself from sporadically used substitute to the club’s starting right back in a matter of weeks.

Taking full advantage of the injury to David Moyes’ usual starter Vladimir Coufal and his backup Ryan Fredericks, Johnson’s excelled in their absence. Stepping up and proving his class, the 21-year-old’s held his own at the elite level, performing admirably against the likes of Manchester United, Everton, Tottenham Hotspur, Manchester City, Aston Villa and Liverpool.

“To be fair, it’s a testament to the manager to be honest. When I’ve been out of the team, he’s always prepared me as if I am playing,” Johnson said. “Of course, I’m playing under Vlad and Ryan on the right and obviously Cress on the left, working with them and seeing what they do well is something that’s helped me a lot.

“Sometimes last year, could I have been ready to come in? We don’t know, but now I think I’ve seized the opportunity and wanted to enjoy my football, which is what I’ve always done. When you get to the big boys, why not enjoy it?”

He’s certainly been enjoying things, with the talented full back looking solid on both ends of the pitch.

Helping the Hammers keep six straight clean sheets upon entering the fray, Johnson’s hardly put a foot wrong in this phase of the game.

Physical and athletic, the jet heeled fullback has proven a tough man to beat in 1v1 situations. Reacting swiftly to opponents’ skill moves and changes of pace and direction, in combination with his long legs and arms that allow him to stretch out to regain possession or unbalance markers respectively, has been key for him.

Moreover, making himself as wide as possible has also meant he blocks pass lanes and sees him act as a solid obstacle when his man is looking to fire crosses into the area.

Considering the many excellent opponents he’s come up against and how he’s not been severely outfoxed owes much to his tackle timing, reading of the play and decision making. 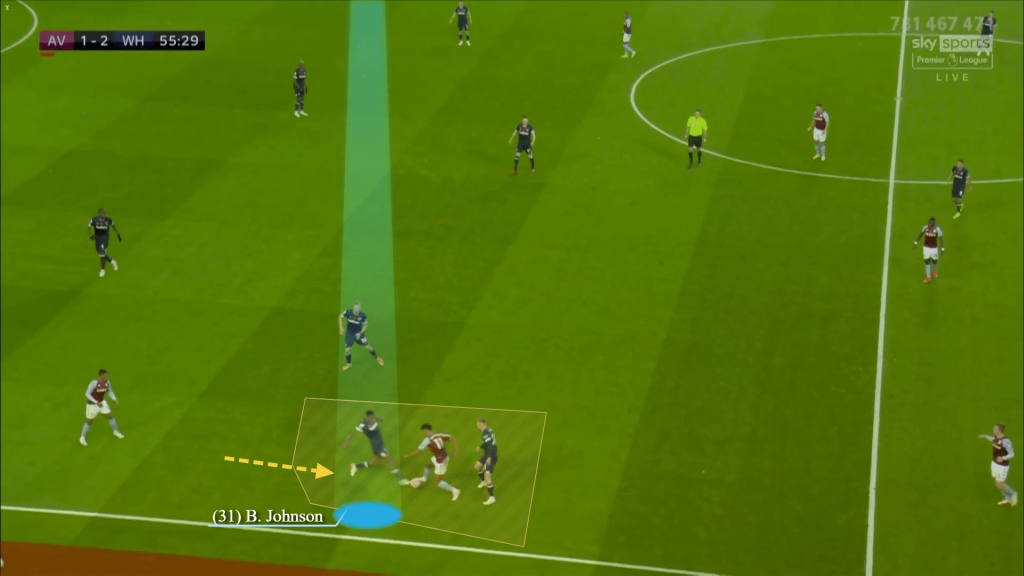 Tracking runners diligently and alert to threats, the speedy fullback has done a neat job of keeping tabs on foes, plus tracking back to support his backline and recover his position to help stop counters.

Knowing when to shift across, drop back, shuttle across to cover a teammate when they step out or press out to opponents when they drop deep, Johnson’s been right in tune with Moyes’ defensive demands. 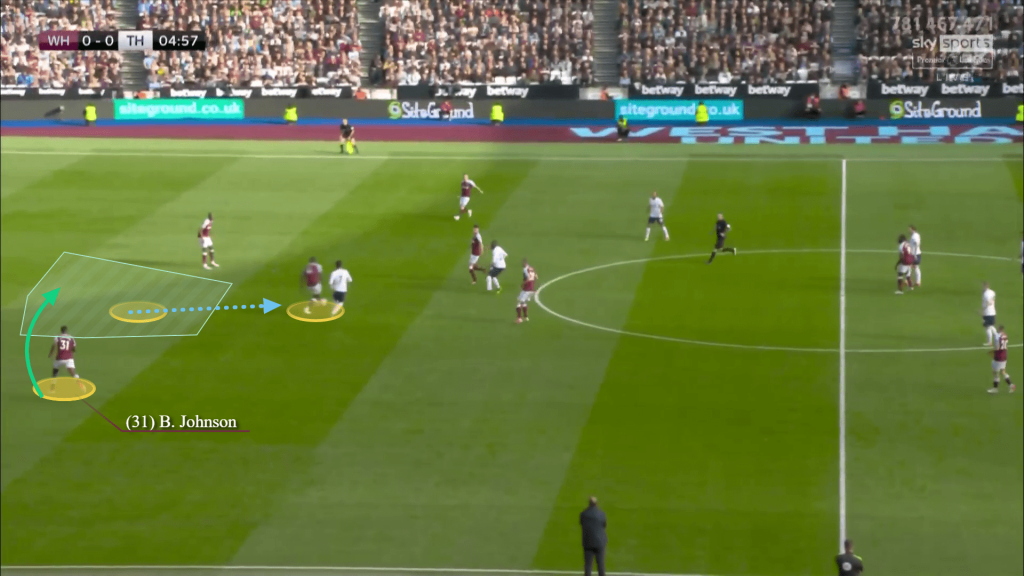 Sound aerially and possessing a good leap, this aspect of his game has been another important string to his bow. Not afraid to run back with the flight of the ball or put his body on line to attack headers, he’s shown bravery and coherent judgement in this area. 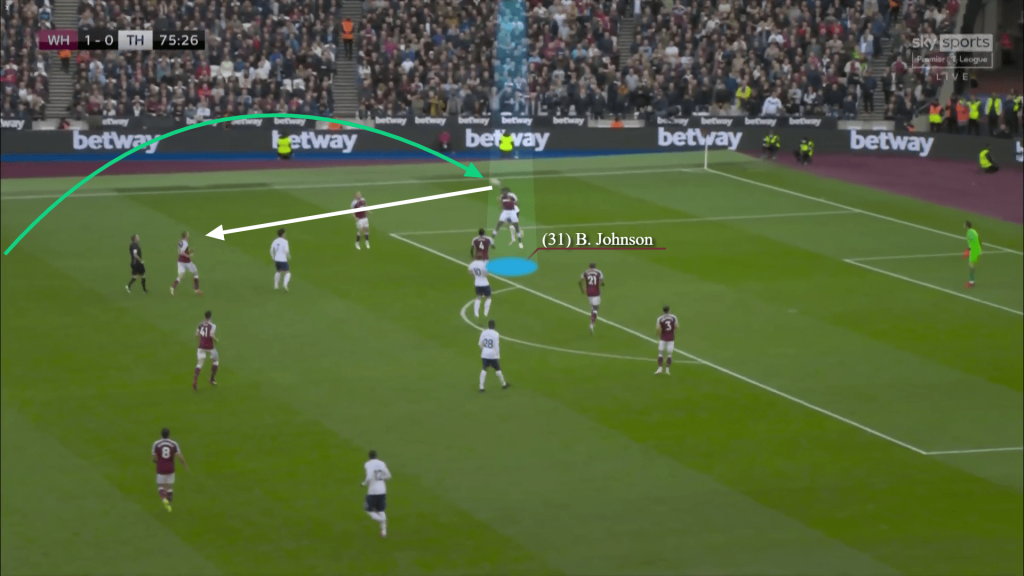 Although there’s still room for improvement in terms of his 1v1 defending posture and positioning, where he sometimes isn’t in a powerful enough stance and can show opponents too much room to cut infield, there’s still been a lot to like about his stopping exertions.

Meanwhile, in an attacking sense, the man who’s previously played as a winger has shown what an asset he can be here too.

Eager to join in attacks whenever possible, his barnstorming runs have added some extra impetus into his team’s efforts going forward. Picking his moments when to underlap or overlap, Johnson’s been a quality outlet for switches of play, to add width and depth to attacks or when embarking on blindside runs into the box. 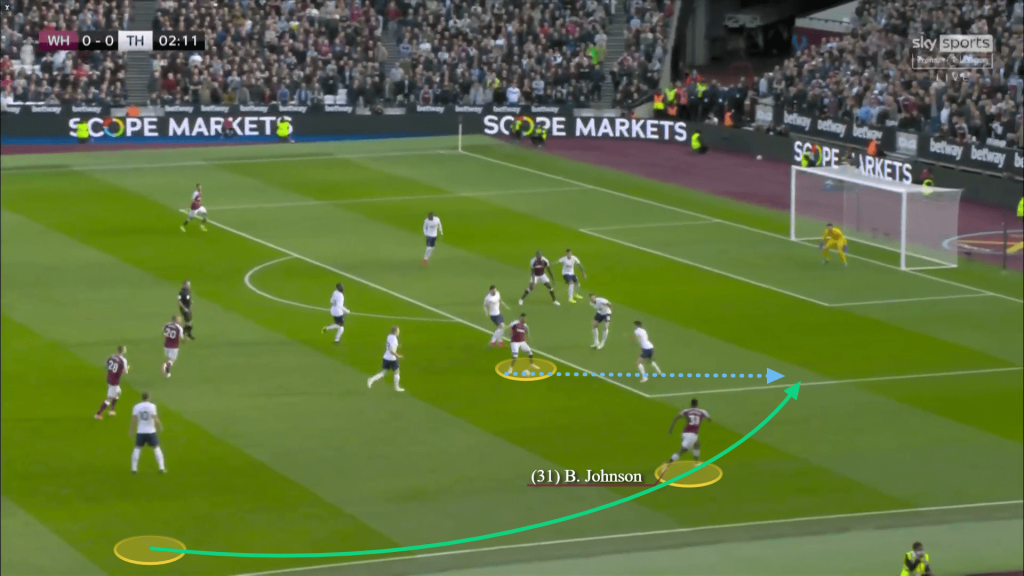 Smart with his movement to form overloads or to be the free man in build up, this is another way in which he contributes through his intelligence.

A powerful dribbler who carries the ball upfield with intent, Johnson’s able to beat opponents with his wicked acceleration, smart feints, shoulder drops and when cutting infield to gain room to fire off shots on goal. 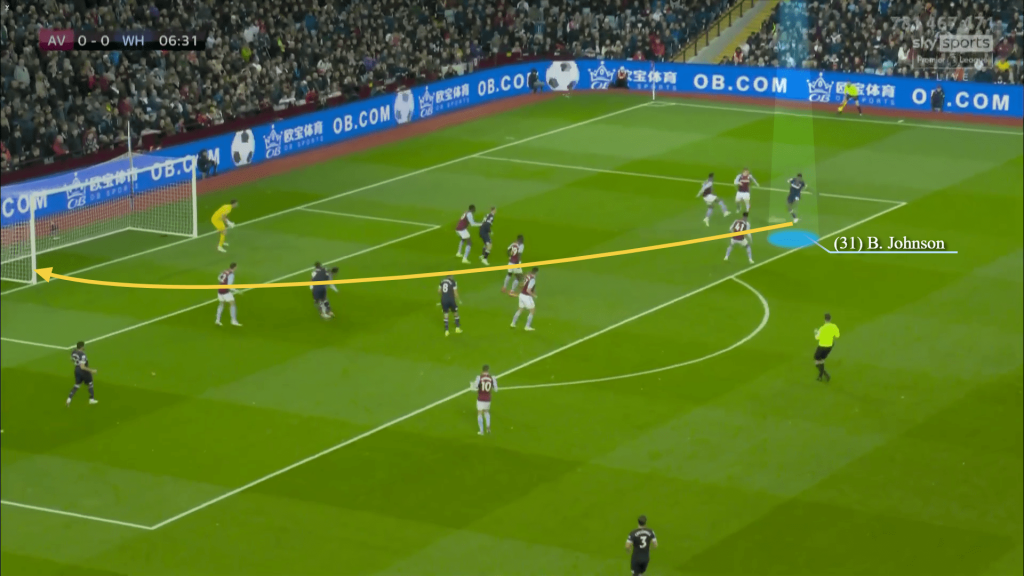 By being tidy with his first touch and ball control means he can maintain possession when pressed, weave out of danger, turn opponents or protect the ball by spinning away from adversaries.

Two footed and very competent with his passing, there’s plenty of upside attached to his distribution. Improving all the time, the way he strikes trademark booming switches of play to isolate the wingers and launches measured through balls in behind to oblige runners have especially caught the eye. 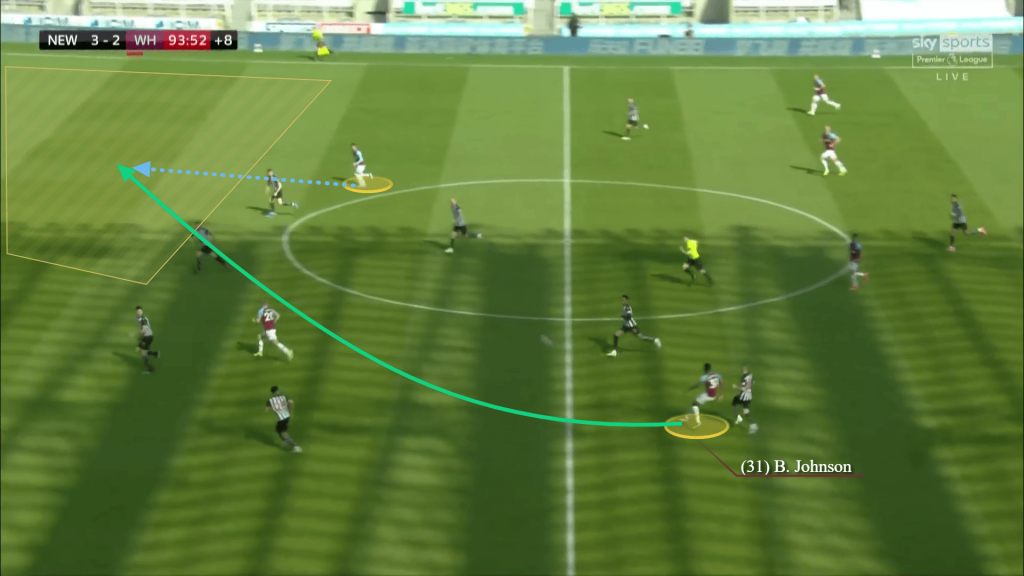 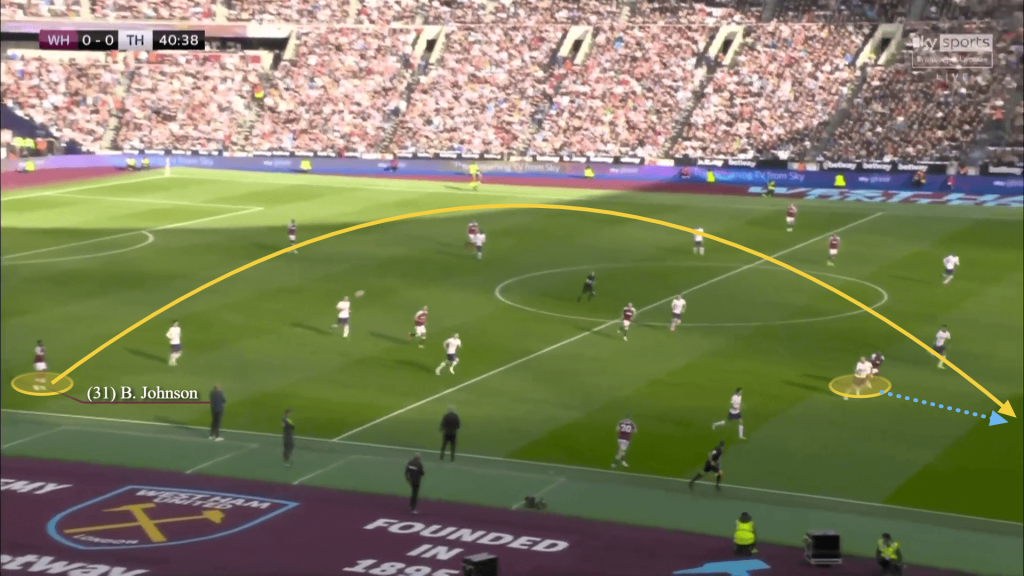 “He has got two sensational feet. You saw his left-foot finish at the weekend. You take a finishing practice and he is one of your best finishers, both left and right foot. He really has got a lot of talent and we are pleased that he has come through our academy,” said assistant manager Stuart Pearce.

While he hasn’t registered any assists this campaign, Johnson’s capable of whipping some useful crosses into the area to pinpoint his targets. 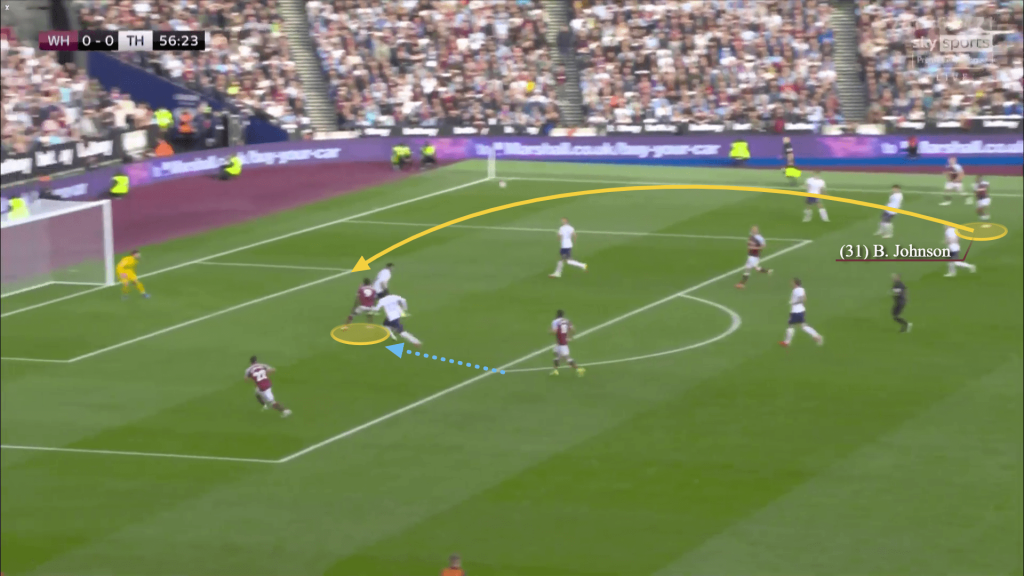 Repaying Moyes’ faith in him brilliantly for giving him a chance, watching the versatile full back, who can play on either flank, go from strength to strength has been one of the highlights of West Ham’s exceptional start to the season.

Reportedly on the verge of signing a new deal, the man who joined the Hammers at the age of seven appears destined to have an extremely bright future.

In Johnson, West Ham have produced yet another gem from their outstanding academy that’s also churned out the likes of Rio Ferdinand, Michael Carrick, Joe Cole, Frank Lampard, Jermain Defoe and Mark Noble.

Although he’s not yet the finished article, there’s no doubting the patience and ultra determined 21-year-old will do everything in his power to keep taking his opportunities to ensure he fulfils his tremendous potential.