Barry Bannan’s qualities still a huge asset for the Owls

While Barry Bannan hasn’t reached the heights of his sparkling form from a few years ago under Carlos Carvalhal for Sheffield Wednesday this season, he’s still been a key contributor.

Bagging seven assists and scoring two goals has been a solid return considering he’s playing for a mid table side who aren’t as bold in possession as they were under Carvalhal. Giving the Owls fans many glimpses of his genius, the classy midfielder even recently drew praise from Manchester City manager Pep Guardiola in Wednesday’s FA Cup loss to City.

Bannan was delighted to receive the plaudits from Guardiola, who described him as “incredible” as Bannan went on to say: “It was amazing to hear Pep say that about me. Even though I’m 30, you look at people like him as if you’re a wee boy again.

“It was how I felt when I started out playing. When I think of Pep and the players he’s had, it brings back the feeling I had when I was 18. I was star-struck. He actually stopped me as I was walking to the players’ lounge and spoke to me personally.

“He shook my hand and said: ‘Well done, you’re a fantastic footballer’. That was huge for me, coming from the best manager in the world.”

A superb technician, who’s work on the ball is at an elite level, the Scotsman’s been a key driving force behind Sheffield Wednesday’s attacking phases.

Able to control the ball smoothly using his clinical first touch and razor sharp ball control, this gives him a solid base to execute his actions from. A mazy dribbler and sound at weaving out of trouble with his prior head scanning and skill, this allows him to break free from opponents’ clutches in tight. Using his close control, shoulder drops, feints and fake passes to unbalance foes, this, in combination with his low centre of gravity, makes him hard to combat.

The fact the 169cm midfielder orients his first touch away from danger enhances his capacity to keep and protect the ball, plus win valuable fouls.

Meanwhile, when it comes to his passing, Bannan’s brilliant in this regard. So good at orchestrating, animating and constructing his team’s moves, he dictates the tempo superbly through his reading of the play, vision and range.

Adept at striking passes over an array of distances with a variety of passes, Bannan’s distribution is such a weapon. In terms of his long passing, the way he can strike scorching diagonals to his wide men, oblige his attackers’ depth runs with aerial through balls and find his strikers with crosses is a joy to watch. Indeed, his set piece taking genius deserves a mention, for his wand of a left foot sees him deliver some wicked deliveries into the area and on goal. Getting plenty of dip, whip, swerve and power when need be, his teammates relish every time the team wins a free kick in a promising location. 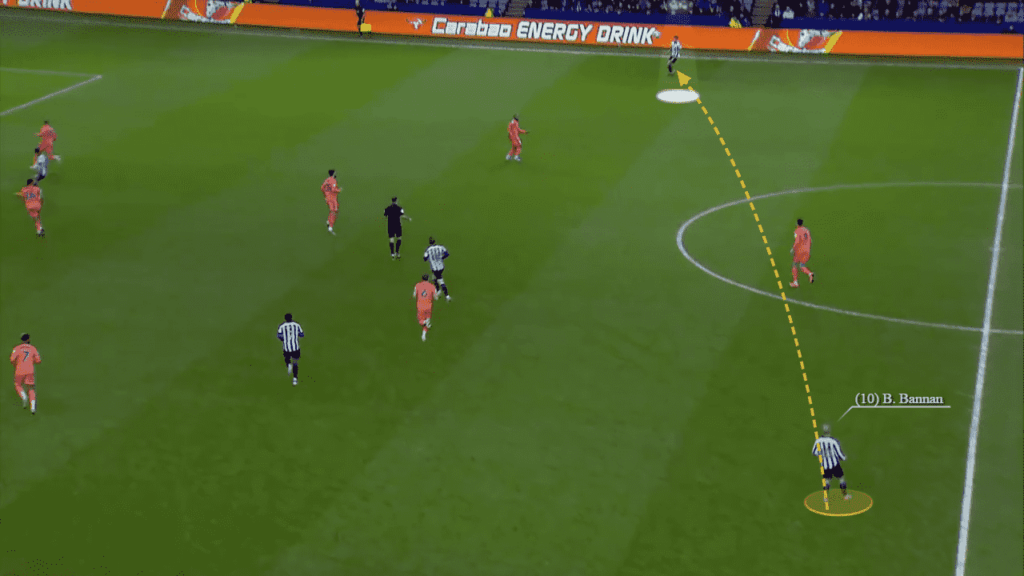 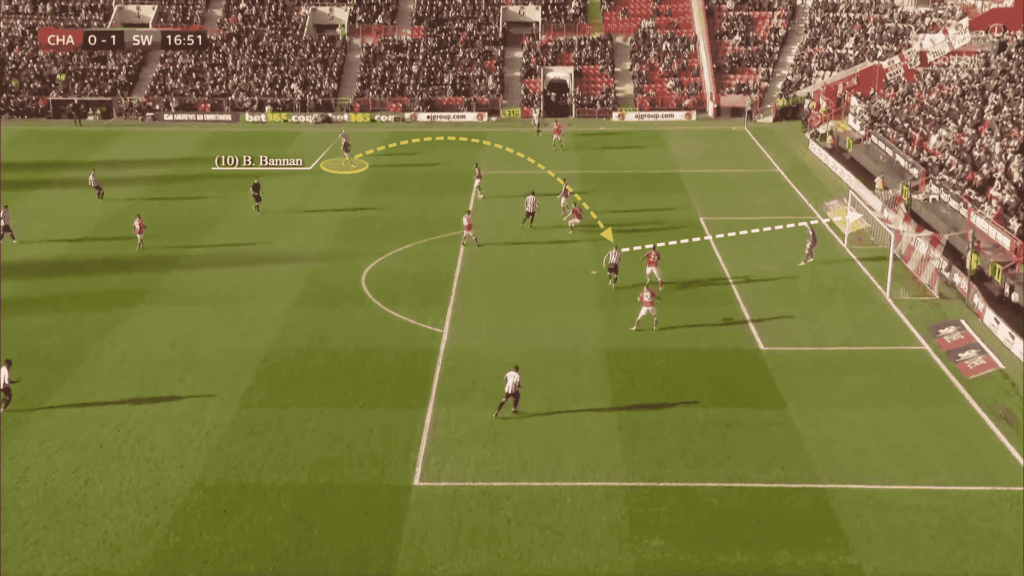 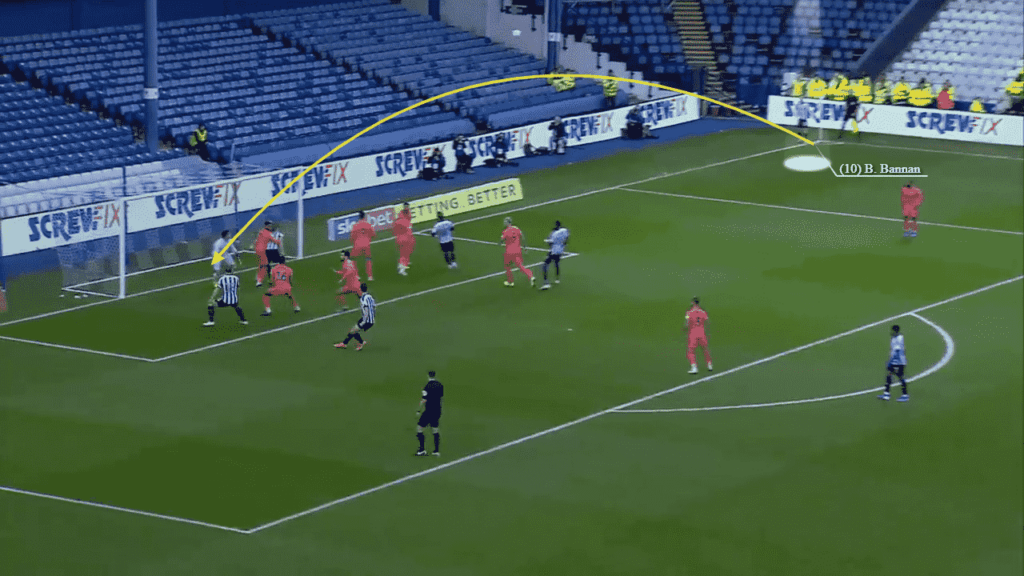 Also shining in short and medium distance passing, Bannan can combine sharply in close quarters with lay offs, flicks, backheels and one touch passes to add momentum into moves. In addition, the way he can strike wicked line breaking passes, slide in classy ground through balls and hit diagonal balls to his attackers, that crucially can move defensive blocks two ways, only adds to his worth. 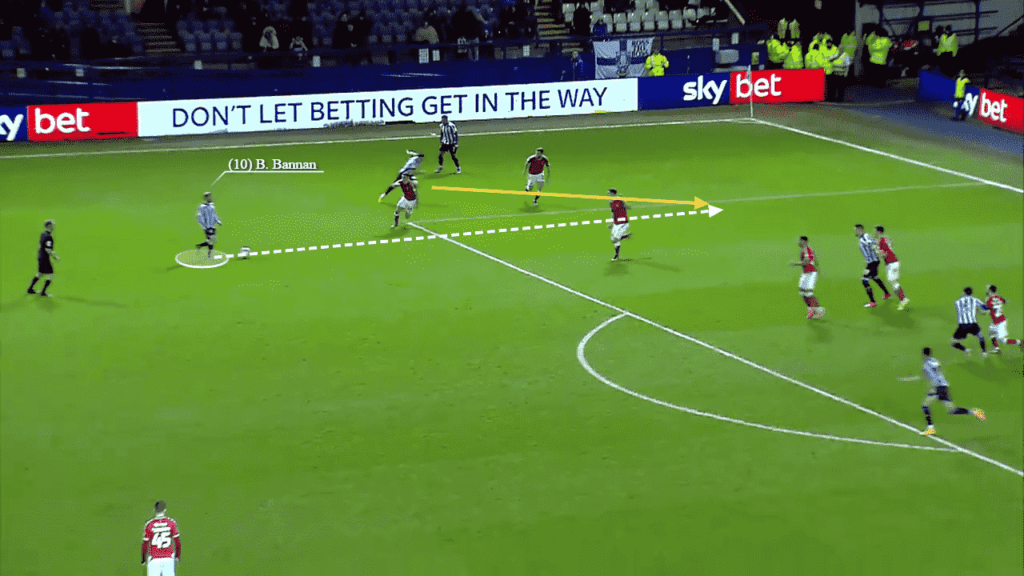 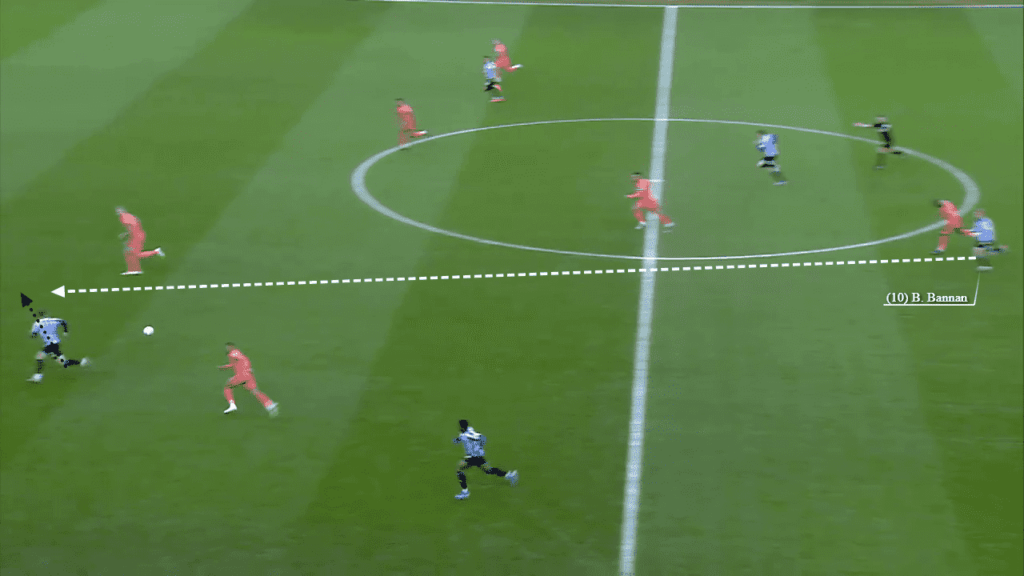 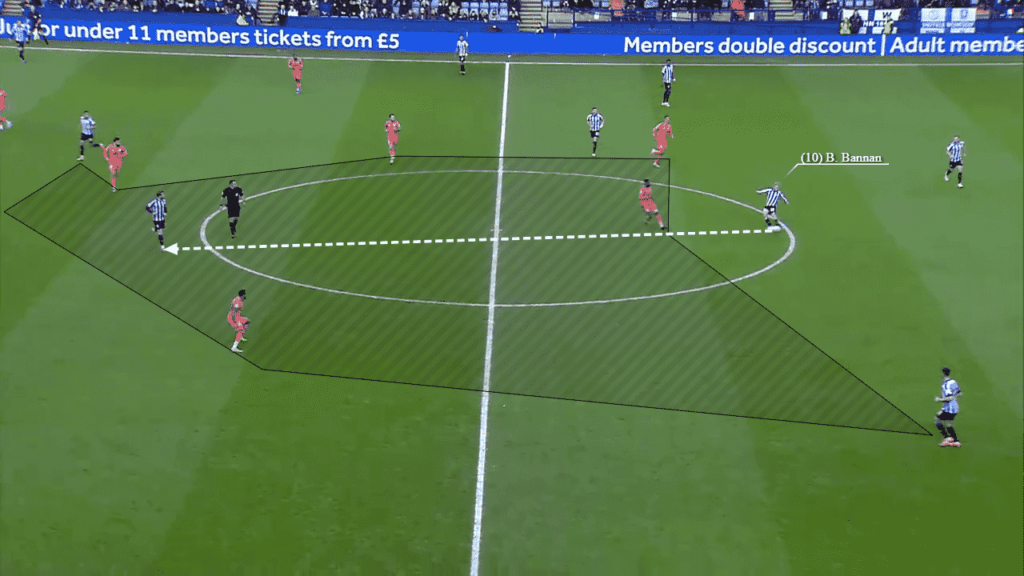 Measuring and weighting his passes ideally for the most part, this sees him act as both his team’s hub in possession and deep lying playmaker.

Knowing where best to get the ball has served him well too, for his movement has accompanied the afore nicely. Regularly seen dropping deep between or nearby his centre backs, this lets him receive in numerical superiority situations. From here, he can use this advantage to get more time on the ball to kickstart attacks. It’s also notable how he’ll drift wider into the half spaces to receive in less populated areas, where he can enjoy the freedom to pick his passes.

As the ball progresses upfield, Bannan will smartly push wide to help generate overloads, stay central to be an outlet to recycle possession or venture in between the lines to be an option. On the odd occasion, you’ll also see him motoring into the box with penetrative runs that are so hard to track for markers.

Bannan’s worth is punctuated by the statistics, for he’s completed 7.95 accurate passes into the final third per game at 70.2% accuracy, 4.04 accurate long balls pg, 1.36 shot assists pg, 0.15 assists pg and 0.92 progressive runs pg over the last five seasons.

Even though this current edition of the Owls doesn’t completely get the best out of him, there’s no doubting what an integral member of Garry Monk’s squad he is. It doesn’t just take Guardiola to recognise this.