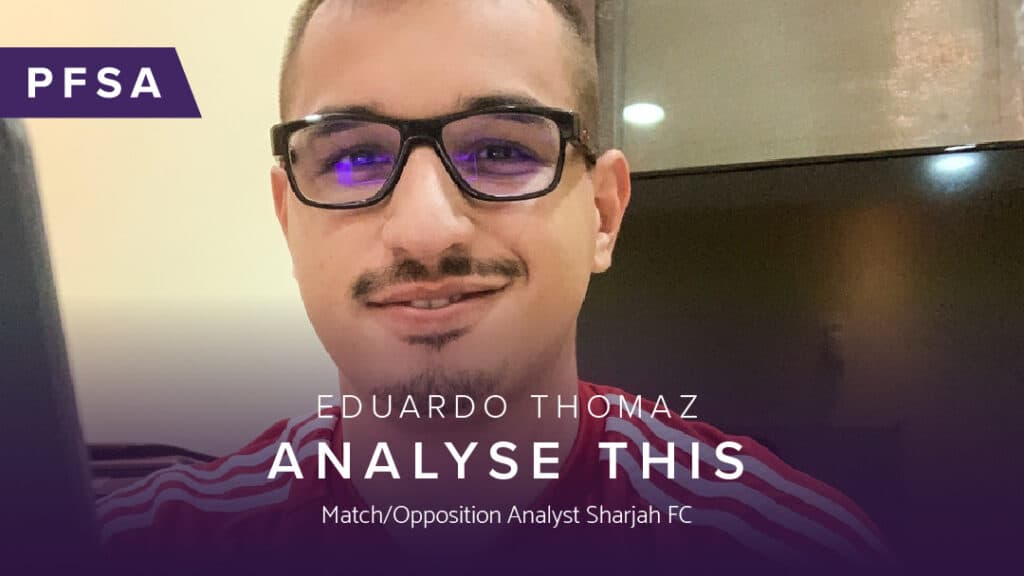 This is based on an opponent analysis protocol developed by myself and my intelligence department. One of the moments of the match that gets priority in my pre-game analysis are the set pieces. I believe my team’s preparation for set-pieces is fundamental to their success in the game. In my analysis protocol, I like to analyse a specific number of corners in order to try to find a pattern of behavior displayed by an opponent. Whenever possible, I also try to find this pattern of behavior playing against teams that have similar tactical systems to the one used by Sharjah. To do this, I filter all the data available and use an average of 15 to 20 video-examples. I normally use set pieces from the past three matches of the opponent and examples of them playing against teams that use the same defensive system as my team.

To highlight how I do this, I have picked out one specific offensive corner for the Al Ain team, from their game versus Shabab Al Ahli from the 12th round of the UAE Pro League 2019/20. The corner came six minutes into the first-half at the Al Ain stadium. At this time, the score was 0-0.

1. How many players are there in the box? How are they positioned?

On this first point, it’s important to note the total number of players attacking inside the box and how they position themselves before the ball is released by the corner kicker, so that we can start to determine the best defensive strategy for this moment of the game. In this topic, it is also important to take into account how the opposing team players mark. This is useful in relation to how your own team sets up and identify strategies to stop what your future opponents are doing.

OBSERVED: (Al AIn in white): Six players inside the area, positioned close to the penalty mark. There is no player next to the corner kicker for a possible short ball.

2. How many players are there outside the box? How are they positioned?

Secondly, we take into account the players outside the box and how they position themselves. This observation is important within a game strategy where my team acts in an offensive transition: perhaps we can take advantage of a post-corner marking flaw. It’s also an opportunity to see if and how they vary their offensive corners in different possibilities: using a short pass, a surprise player in the attack coming from the outside of the box to shoot or an offensive second ball when a player outside the box participates in the play after a defensive rebound inside the box on the first ball.

OBSERVED: Three players outside the area, in two different situations. One closer to the box for a possible second ball after a rebound and the other in a defensive position close to the midfield area aiming to tackle an opponent player that may carry out the offensive transition in a counter-attack play.

3. Where and to whom is the ball aimed?

It is also important to identify where that ball is delivered (pitch region) and if there is a specific player that moves to attack it. We have to be prepared to enhance our defensive system according to their offensive movements once the ball is put in play. 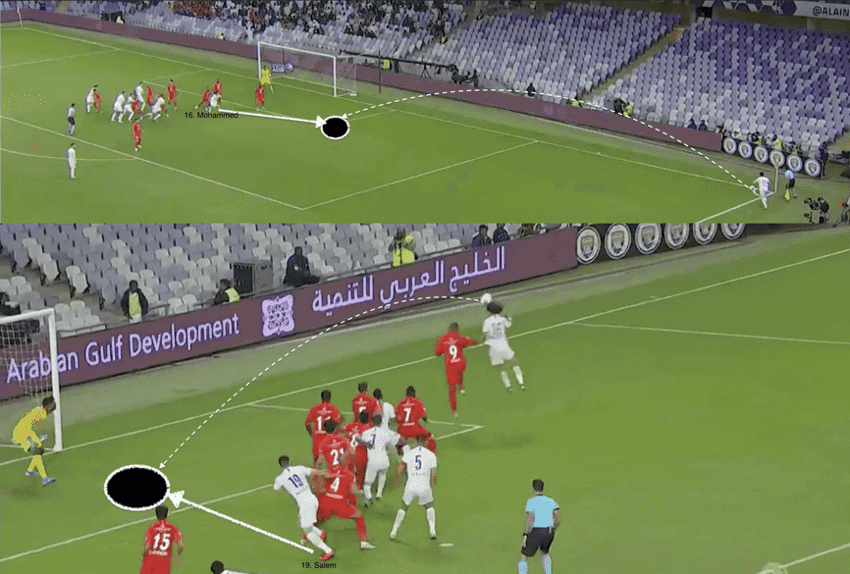 4. Are there any special moves in play? Do they use specific strategies such as block players?

After observing the corner delivery, we observe the movement of the players once the ball is put in play. In this topic, our goal is to identify key players with possible specific functions within the play, such as blocking players, for example. These are players whose role is not to attack the ball but to block one of the defensive players to allow the intended targets to get a free run to attack the ball. Understanding how they behave, we can tighten our marking around this strategic point and players. We should also observe which specific marking mistakes were made by the opposing team (red) to build a different defensive strategy.

With the database of the corner kicks observed (15-20 plays as explained before), we are able to identify the offensive corner pattern used by a specific team. At this point in the analysis of one specific corner, we also observe whether the offensive behavior of the analysed team was in accordance with the pattern identified or if there was a variation in positioning and play. If there has been variation, we seek to understand why: which factors in the opposing team’s positioning and defensive behavior can be identified as influencing the alteration of the offensive pattern of the first team (for example: zone marking, man-to-man marking). 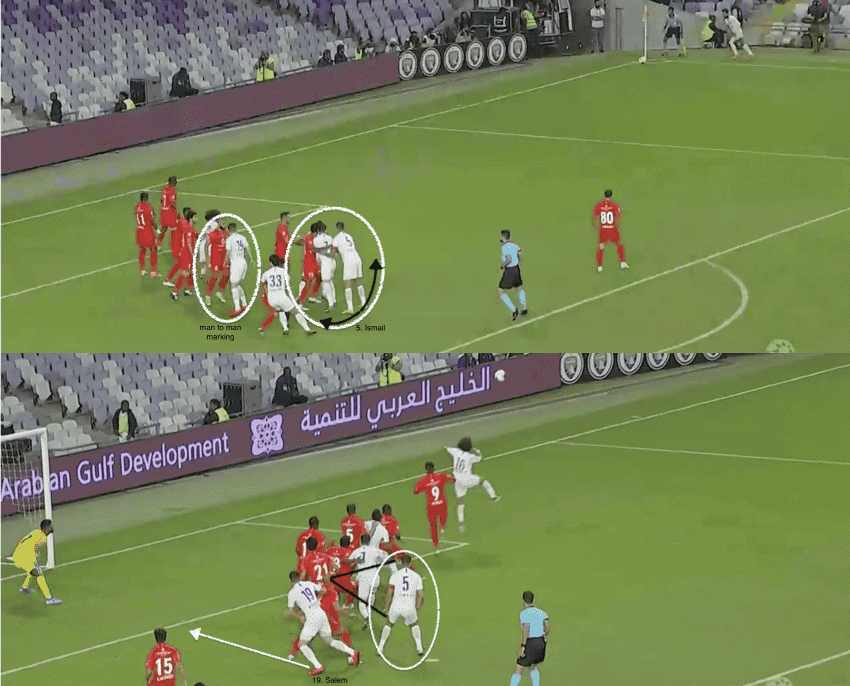 Based on this specific corner, I hope that I can help you to see how we break down individual corners so that when viewed in relationship to other corners we are able to identify patterns of play and different methods for countering them. 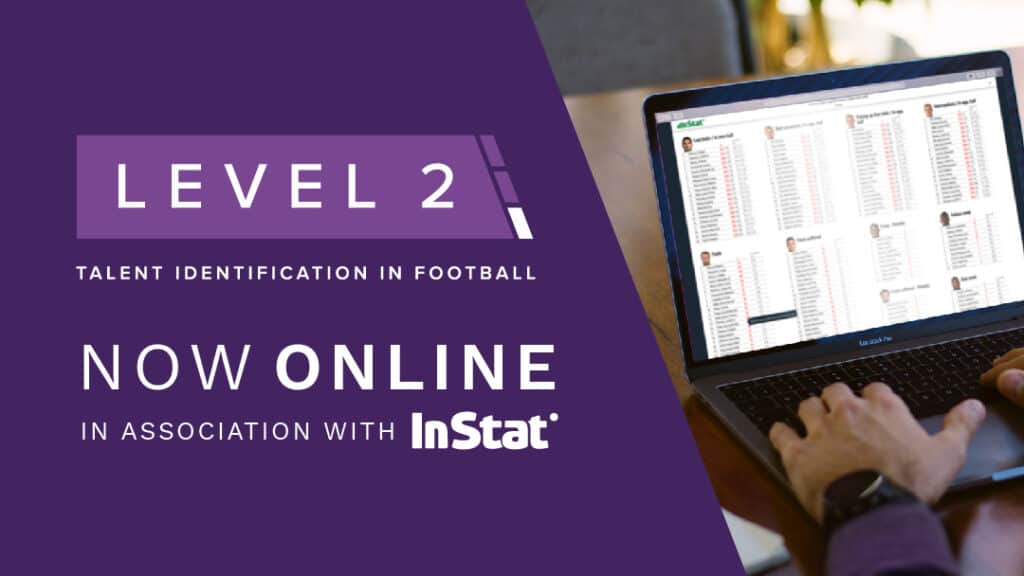