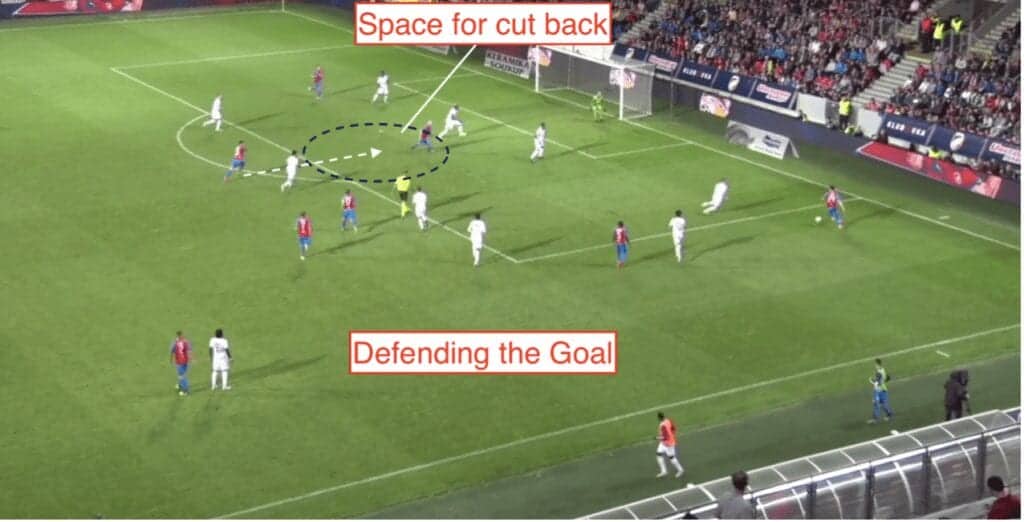 As important as it is to score goals, if a team doesn’t concede then they are guaranteed at least one point. If we think back to Mourinho’s great Chelsea side of 2004/2005, they conceded only 15 goals during that season; a Premier League record. Playing against a well organised defence is difficult for even the best of teams. In this article, we aim to look at the different phases of a team’s defensive structure and the different types of outcomes they try to achieve.

When analysing an opponent, we can break down their defensive structure into three components: Start of press, block defending and defending the goal (we could also add defending transition and set pieces but these have been covered in separate articles). The graphic traditionally shows where these moments take place. However, it’s really important to understand that often they overlap due to the fluid nature of football. It’s highly unlikely you will be required to defend your goal without having to defend in another phase first. Moreover, a team may not have a start of press if they are simply dropping back into shape.

Begin of the press

Begin of press is the moment when a team starts to put pressure on their opponent to try to win the ball back. Traditionally this phase starts higher up the pitch (near the opposition box) and when the opposition goalkeeper has the ball. However, we have seen on many occasion, teams dropping right back into their block defending shape without any intention to try to win the ball back higher up the pitch. It is possible for a team not to have a begin of press phase because in essence, their begin of press is actually their block defending shape (see example below). Even if a team doesn’t really press high or have a start of press, it’s important to note that when compiling reports on said opposition. 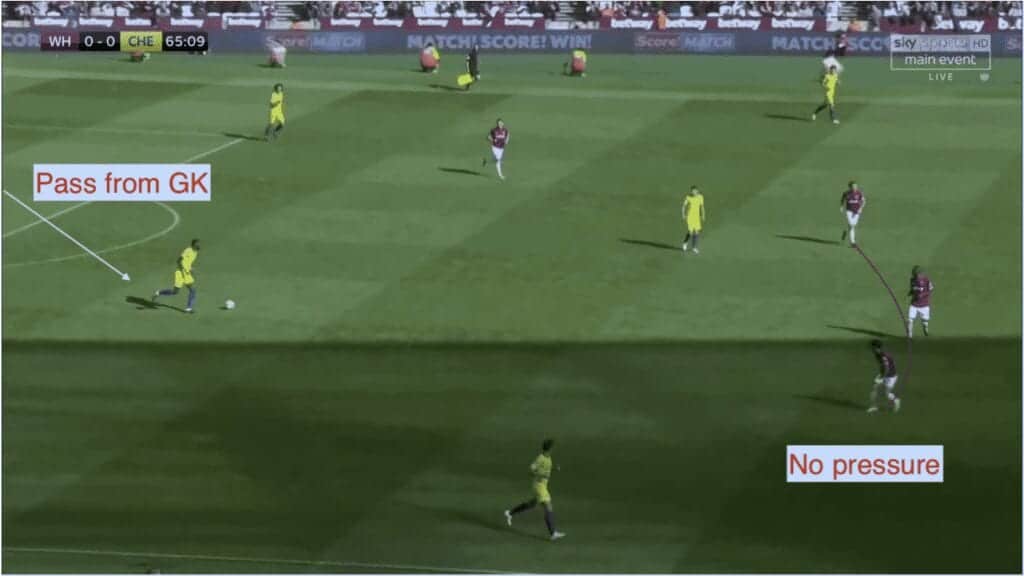 There can be lots of variations of high pressing because a team’s high press is actually altered by how the opposition wants to build up. If Team A’s defensive midfielder drops to the edge of their own box, Team B’s midfielder can push higher to mark. If Team A’s centre backs split wide, Team B’s wingers can move higher and wide to mark them (although this has changed due to the new ruling on goal kicks whereby the ball is live as soon as the goalkeeper kicks it). As always, it’s important to identify where the space is.

Block defending is when a team is set in their defensive shape. This normally happens in the middle of the pitch but could be deeper depending on the tactics of that team. Examples of block defending shape could be anything from 4.4.2, 4.2.3.1 or 3.5.2 (to name a few). The formation is important but the key details are more around the specific positions, behaviours and movements of the individuals in that shape; it’s also important to identify how high or low that defensive block is. If a team has a high block then there will be lots of space behind. Conversely, if a team has a low defensive block then there is likely to be more space in front. There are no strict definitions of a high, mid or low block but we should aim to mark areas of the pitch to keep consistency across our reporting. 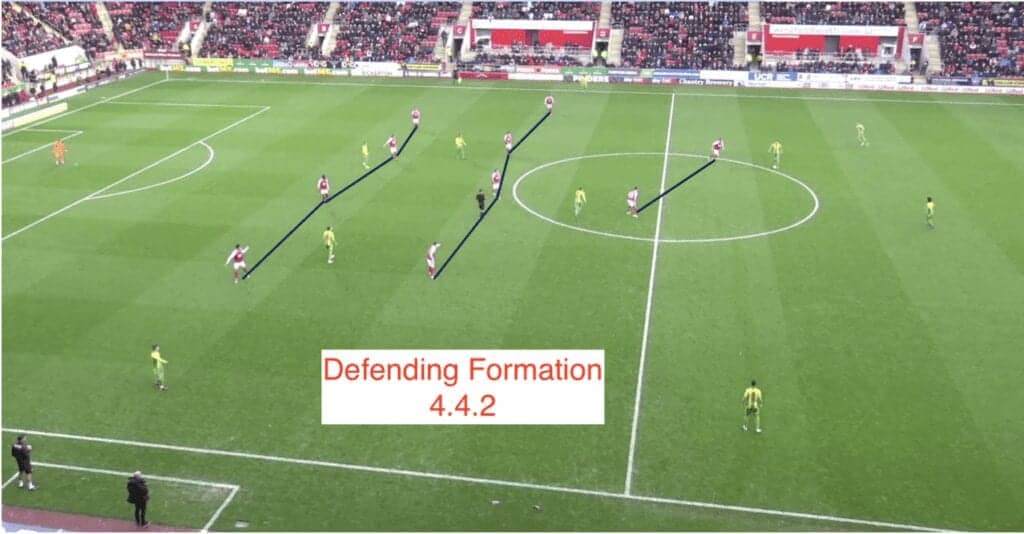 So, what type of behaviours can we look for: Do the wingers like to jump in front to press? Does the #9 drop deeper to stop our deepest midfielder getting on the ball? Are the centre backs pressing between lines if we play in front? Is there space between the lines or are the spaces wider? Does the deepest midfielder cover behind the full back or do the centre backs have to cover wider?

There are a lot less variations of how to defend the goal. The key differences here are normally around how many and which players stay up the pitch when a team is defending their goal. This links heavily to the opponents attacking transition phase. If we identify who stays up the pitch and the type of players they are, we can start to suggest ways to counter their threats to help our team maintain attacks and stay in the final 1/3 phase.

Another key piece of information we can look for is how deep the defenders go. If a team drops players right on top of their goalkeeper then we know everyone will be onside. Sometimes when teams defend really deep, it means there is more space around the penalty spot. In this instance, we could suggest cut back or pull backs crosses.

A final tactic when defending the goal is one championed by Manuel Pellegrini at West Ham. As soon as the opponent passes the ball backwards, the West Ham defence likes to squeeze up straight away to catch players offside. This can be hard to navigate and midfield runners from deeper are vital to navigate this tactic. 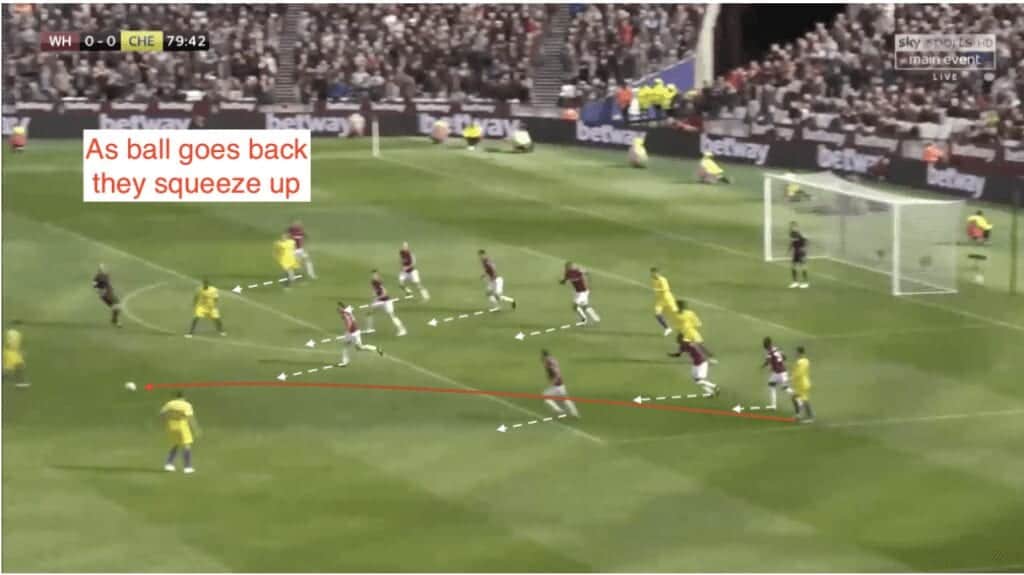 Hopefully this article has given you a slightly different perspective of the things you want to look at when analysing a team’s defensive system. When analysing a team’s defensive set up, its always important to highlight where the spaces are that your team can exploit and during which phase you feel that team can be exploited the moment. This is one of a series of articles that explores the various concepts of the analysis process, so please keep your eyes peeled for more content landing soon…